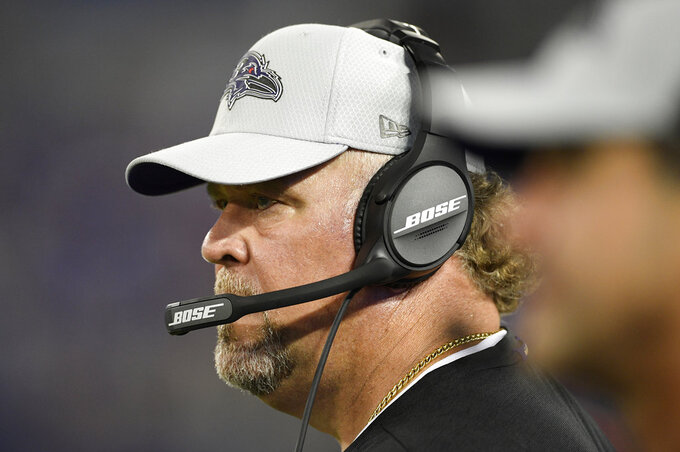 FILE - In this Aug. 30, 2018, file photo, Baltimore Ravens defensive coordinator Don Martindale stands on the sideline in the second half of a preseason NFL football game against the Washington Redskins, in Baltimore. Making the most of a second chance, Don Martindale has done a masterful job assembling and directing the top-ranked defense in the NFL. (AP Photo/Nick Wass, File)

OWINGS MILLS, Md. (AP) — Making the most of a second chance, Don Martindale has done an impressive job assembling and directing the top-ranked defense in the NFL.

Combining an aggressive array of blitzes with bold coverage in the backfield, Martindale has added his name to the long list of accomplished Ravens defensive coordinators that includes Marvin Lewis, Rex Ryan, Chuck Pagano and Dean Pees.

Baltimore (10-6) heads into Sunday's playoff game against the Los Angeles Chargers (12-4) with a unit that allowed the fewest yards per game (292.9) and second-fewest points (17.9). The Ravens yielded an NFL-low 58 points in the fourth quarter, notched a team-record 11 sacks in a win at Tennessee and had three interceptions in last week's must-win game against Cleveland.

A year ago, Baltimore lost its finale against Cincinnati to miss the postseason. After the Ravens snuffed the Browns' final drive on Sunday, linebacker Terrell Suggs was asked the difference between this season and last.

"Don Martindale," he replied. "It wasn't perfect. It hardly ever is. It wasn't pretty, but it was The Raven Way. It was a good finish, and a way to punch our ticket."

After serving for seven years as Baltimore's linebackers coach, Martindale was promoted by head coach John Harbaugh in January after Pees bowed out.

Obviously, Harbaugh has no regrets.

"Don Martindale did a great job. Not at all unexpected in any way," Harbaugh said. "I just think the world of him, always have."

This marks Martindale's second stint as a defensive coordinator. The first time, at Denver in 2010, was a disaster. The Broncos went 4-12 that season and gave up more points (29.4 per game) and yards (390.8) than any team in the league.

Martindale was fired after that season. He wasn't sure if he would ever get another shot at it, but Harbaugh made it happen.

Asked if Baltimore's performance this season served as vindication, Martindale responded, "I haven't sat back and reflected on that. We're just looking forward to this game on Sunday and keeping it rolling. But since you ask me, yeah, it feels a lot better."

Martindale is known around the team complex as "Wink," a nod to former game show host Wink Martindale. In his role as defensive coordinator, Martindale has found that treating the players as individuals is the best way to get optimum production from the entire unit.

"I love 'Wink,' man. He's a great dude," linebacker Matthew Judon said. "He believes in all of his players, and he knows how to speak to us in different ways. He doesn't speak to me like he speaks to (linebacker) C.J. (Mosley). He knows how to reach us in our own different spaces. I think that's why we work so hard for 'Wink' and play so hard for him."

"What sets him apart is his personality, his openness, his belief in us and in how honest he is," Weddle said. "When your defensive coordinator has put in the time and the effort, and really is genuine to each player, it makes you want to play that much harder for him."

Lewis, Ryan, Mike Nolan and Pagano are among the Ravens defensive coordinators who have gone on to become NFL head coaches. Given Martindale's ability to communicate and whip up a wicked defensive scheme, he might be a candidate to at least receive an interview in the near future.

"I think he would be a terrible head coach," Judon said with a wry grin. "I say that because I want to keep him around as our defensive coordinator."

Weddle said: "No matter how bad you play, how things may go throughout the season, he'll always stand (up) for you. That's what you love about him, and why the guys play hard for him. I know a team would play lights out for him if he ever got the opportunity."

Martindale got his first coach job as a backfield coach at Defiance College in 1986 and has steadily climbed the vocational ladder, but has has never had a team to call his own.

"If you're worth your salt as an assistant, I think everyone wants to be a head coach," Martindale said. "It's just something that if it happens, it happens. If it doesn't, it doesn't.

"I told John this the other day, 'I'm 55. However long you want to go, I'd love to just be the D coordinator here and do it with you.'"