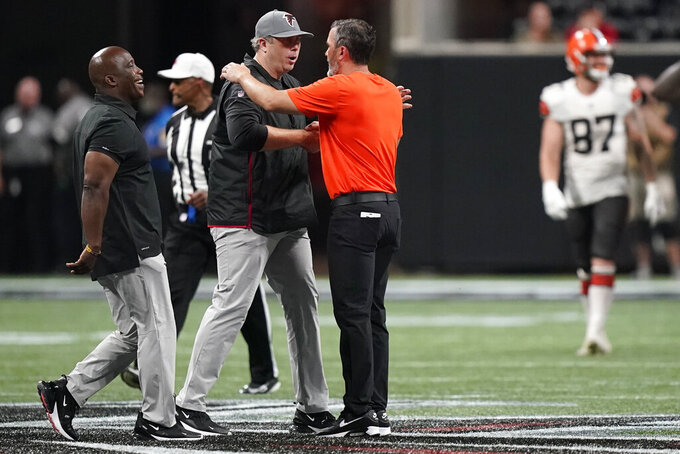 When the Atlanta Falcons open the season Sunday hosting the Philadelphia Eagles, it will be a matchup of rookie coaches leading the two worst teams in the NFC from a year ago.

Former Tennessee Titans offensive coordinator Arthur Smith takes over the Falcons, who finished 4-12 under an interim coach after firing Dan Quinn (and long-time general manager Thomas Dimitroff) when the team lost its first five games of 2020.

Smith downplayed the neophytes on the sideline.

“When the ball is kicked, Nick and I aren’t playing,” Smith said. “I’m not blocking anybody and he’s not running any routes. It’s about the players and making sure both teams will be prepared.”

At least Smith doesn't have to worry about breaking in a new starting quarterback.

Matt Ryan, who has missed only three games in his career, starts his 14th season as the Falcons No. 1 signal-caller.

Smith is the fourth head coach Ryan has worked with in Atlanta.

“We're very much on the same page,” Ryan said. “Some of the terminology here and there is a little bit different. It’s just trying to sort those differences out.”

Even though he didn't play at all in the preseason, Ryan doesn't expect a difficult adjustment to Smith's offense.

“He’s worked on different staffs with a lot of people that I’ve played for,” Ryan said. "There are a lot of things that we've both done at certain points of our career that are very similar, and I think that helped in the transition process.”

The Eagles decided to go in a new direction at quarterback, trading Carson Wentz to Sirianni's former team to remove any doubt that Jalen Hurts is the starter.

Hurts, who started the final four games of 2020, will be leading a new-look offense that must improve on last season's 20.9 points a game — second-fewest in the NFC.

Sirianni is taking a hands-on approach with the offense and appears to have bonded quickly with Hurts.

“I’m in every quarterback meeting,” the new coach said. "You have no choice but to grow closer.”

The Eagles have high hopes for DeVonta Smith, the Heisman Trophy-winning receiver from Alabama.

Smith, who missed time in training camp with a knee injury, starts along with 2020 first-round pick Jalen Reagor, who had a disappointing, injury-riddled rookie season.

“DeVonta is going to have a big role on this team,” Sirianni said.

Smith, the 10th overall pick, is looking to become the first Eagles receiver to reach 1,000 yards since Jeremy Maclin in 2014.

The Falcons' offense has its own touted rookie.

Kyle Pitts the No. 4 overall pick, is expected to be one of Ryan's favorite targets right from the start. The Falcons expect the tight end to create all sorts of matchup problems with his size (6-foot-6, 240 pounds), speed and receiver-like skills.

“You try to get a feel for a guy’s strengths as quick as possible," Ryan said. "I think he’s done a great job. He’s a sponge, there’s no question about it. He listens and he’s constantly taking in information."

In an interesting twist, both Ryan and Pitts are natives of the Philadelphia area. Now, they're teaming up to try to beat the Eagles.

“People actually knew him when he was in Philadelphia," Ryan joked. “I was flying under the radar in high school.”

The Falcons will be playing their first game in a decade without Julio Jones on the roster.

The seven-time Pro Bowler and greatest receiver in Atlanta history was traded to Tennessee in the offseason to help the team cope with salary cap issues.

Calvin Ridley seems fully capable of taking the lead role, but it will be strange to see the Falcons lining up without No. 11 on the outside.

“I’m a lot more confident with the tools I have in my bag,” said Mailata, a former Australian rugby star who hadn’t played football before the Eagles selected him in the seventh round in 2018. “Right now I’m trying to sharpen those techniques.”

The Falcons' new defensive coordinator, 72-year-old Dean Pees, is charged with finding ways to get more pressure on opposing quarterbacks.

Atlanta has only 29 sacks last season, tied for 23rd in the league. Dante Fowler was a huge disappointment, managing just three sacks after recording 11 1/2 in 2019 with the Rams.

Pees doesn't have a plethora of talent to work with, but he'll likely call plenty of blitzes and look for other ways to creatively use the talent he does have, most notably defensive lineman Grady Jarrett.