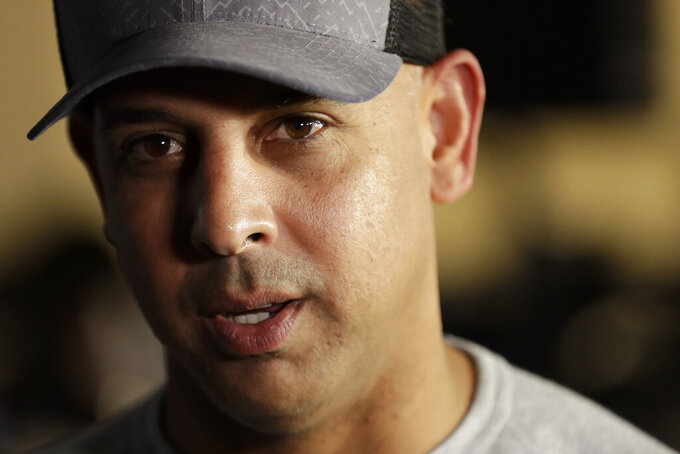 NEW YORK (AP) — The Boston Red Sox got off lightly in Major League Baseball's sign-stealing scandal after Commissioner Rob Manfred concluded their violations were far less flagrant than those of the Houston Astros.

Boston was stripped of its second-round pick in this year’s amateur draft for sign stealing in 2018 and former manager Alex Cora was suspended through the 2020 postseason for his previous conduct as the Astros' bench coach. Manfred had held off a decision on Cora until now.

Manfred issued his decision Wednesday, announcing Red Sox replay system operator J.T. Watkins violated the prohibition on in-game use of video to revise sign sequences provided to players. Watkins, who denied the allegations, was suspended without pay through this year’s postseason and prohibited from serving as the replay room operator through 2021.

Boston won the 2018 World Series, but Manfred said the misdeeds didn't occur during the postseason. He found Boston’s cheating was not as pervasive or egregious as the behavior of the Astros, whom he determined repeatedly used a video camera in the outfield to steal catchers’ signs during their run to the 2017 championship and again the following season.

Manager AJ Hinch and general manager Jeff Luhnow were suspended through the 2020 postseason on Jan. 13 and fired that day by the Astros. Houston was fined $5 million, the maximum under the Major League Constitution, and lost its next two first- and second-round amateur draft picks.

Baseball's season is on hold because of the coronavirus pandemic, and this year's draft may be cut from 40 rounds to as few as five. Manfred said he was mindful “this penalty may have a more significant impact on the Red Sox than in a normal year.”

"Unlike the Houston Astros' 2017 conduct, in which players communicated to the batter from the dugout area in real time the precise type of pitch about to be thrown, Watkins' conduct, by its very nature, was far more limited in scope and impact,” Manfred wrote. “The information was only relevant when the Red Sox had a runner on second base (which was 19.7% of plate appearances league-wide in 2018), and Watkins communicated sign sequences in a manner that indicated that he had decoded them from the in-game feed in only a small percentage of those occurrences.”

A 30-year-old from Tuscaloosa, Alabama, Watkins is a 2012 graduate of the U.S. Military Academy. The catcher was selected by Boston in the 10th round of that year's amateur draft and played in the Red Sox system until 2015.

Manfred called Watkins a “key participant” in the 2017 Apple Watch incident, saying he relayed decoded signs from Boston's replay room to the dugout, at first with a runner and then with the watch to an athletic trainer.

Watkins compiled advance scouting information in recent years, and part of his job was to decode opposing pitchers' sequences ahead of series. His replay room was moved from a remove location to adjacent to the dugout in 2018.

Manfred said the latest misconduct occurred during the 2018 regular season but not in the postseason, when MLB began to place staff in video rooms to monitor conduct.

Manfred concluded Cora did not know and had no reason to know of Watkins’ conduct, but “did not effectively communicate to Red Sox players the sign-stealing rules that were in place for the 2018 season.”

Cora, an infielder on Boston's 2007 champions, was mentioned 11 times in Manfred's decision on the Astros, which said he developed the cheating system. But Manfred held off on a penalty until after investigating the Red Sox. Cora left Houston after the 2017 season and joined the Red Sox.

Fallout from the January penalties caused Cora and newly hired New York Mets manager Carlos Beltrán to lose their jobs. Beltrán, the senior player on the 2017 Astros, was the only player mentioned as participating in the scheme to place a monitor near Houston's dugout to receive video from the outfield and have players bang on a trash can to signal breaking pitches.

The Red Sox largely escape being labeled as tainted champions. The NFL's New England Patriots were found to have stolen signals in their 2007 AFC championship season by videotaping opposing coaches. The league fined the Patriots $250,000 and docked them a first-round draft pick, and also fined coach Bill Belichick $500,000.

“MLB acknowledged the front office’s extensive efforts to communicate and enforce the rules and concluded that Alex Cora, the coaching staff, and most of the players did not engage in, nor were they aware of, any violations," Red Sox president Sam Kennedy said in a statement. “Regardless, these rule violations are unacceptable. We apologize to our fans and Major League Baseball.”

Red Sox players were promised immunity in MLB's investigation, but Manfred said even if players had been subject to discipline, none would have been punished.

He wrote “11 witnesses identified features of Watkins’ in-game communications that indicated to them that Watkins had at times acquired the sign sequence information from the replay room during the game.”

Manfred said six witnesses claimed they observed Watkins writing signs during games and four said they saw him use gestures or notes to communicate signs when a video monitor was present, which made them think he was trying to conceal prohibited conduct.

Watkins told MLB that any information he provided during games was obtained from advance scouting. He said any gestures he made were innocuous and suggested the possibility players may have been confused by his providing information during games, not understood his preparatory work or may have accused him in a competitive move only after moving on to other teams.

“Watkins did not provide a persuasive explanation for why the information he provided to players during the game differed from information provided prior to the game,” Manfred wrote. “I am significantly troubled by Watkins¡¦s admissions that he knowingly attempted to conceal his communications with players from the video room monitor.”