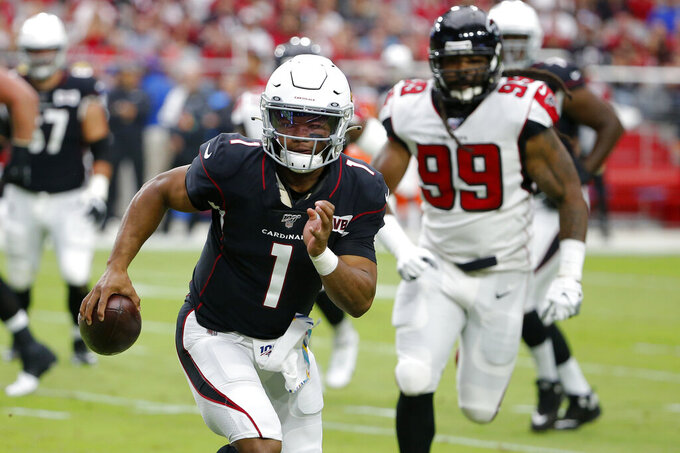 EAST RUTHERFORD, N.J. (AP) — There were some who questioned the Arizona Cardinals and New York Giants for taking quarterbacks Kyler Murray and Daniel Jones, respectively, in the first six picks of the NFL draft.

Murray too short. Jones had a losing record at Duke. A lot of critics and fans had their opinions.

Six games into the season, the Cardinals (2-3-1) and Giants (2-4) are very happy with the picks and the rookies will be on display Sunday when Arizona comes to MetLife Stadium to face New York.

Murray, the No. 1 overall, has started every game and has the Cardinals on a two-game winning streak. He is an exceptional athlete who can beat teams with feet or his arm.

Jones, the sixth pick, replaced Eli Manning after New York lost its first two games. While not as much of a runner as Murray, he energized the offense with his ability to extend plays and throw accurate strikes. The Giants won their first two games with him starting and lost the next two to Minnesota (4-2) and New England (6-0).

But the vibes are positive and both teams are looking to the future and getting back into the playoffs at some point.

The previous matchup featuring two rookie starting quarterbacks selected in the top 10 in the common era of the draft was last year when Sam Darnold of the Jets (No. 3) faced Josh Allen of the Bills (No. 7).

"You watch around the league, even some of the best quarterbacks are trying to do things maybe they shouldn't be trying to do," he said. "That's the beauty of the position. It's one of the most unique positions in all of sports because you have to make split-second decisions with guys trying to take your head off."

That's what Jones and Murray will have to deal with on Sunday.

Five things to watch in the game:

The biggest question mark in the game. Last season's NFL Offensive Rookie of the Year has missed the past three games with a high sprain to his right ankle. The running back is expected to play after practicing all week. He adds an ability to score on any play to an offense hit by injuries recently. Tight end Evan Engram (33 catches with two TDs) also is expected back.

The Cardinals have developed a versatile and productive two-man backfield with David Johnson and Chase Edmonds.

Johnson's success was expected. The 2016 All-Pro has had at least 100 total yards in each of his past three games and has developed into an excellent run/pass threat. His 30 catches for 315 yards both rank second on the team. His three receiving touchdowns rank first.

Edmonds, a second-year player, is a surprise. He's run for 161 yards this season — a 6.7-yard average — and caught eight passes, including one for a touchdown against the Falcons last week. Coach Kliff Kingsbury is playing them at the same time more often to pressure defenses.

Former Cardinal Markus Golden is having a comeback season with the Giants. The linebacker has a team-high five sacks, with a least a half in five consecutive games. He scored his first career touchdown on a 42-yard fumble return against the Patriots. Golden is looking forward to facing Arizona left tackle D.J. Humphries. The two were drafted by the Cards in 2015: Humphries in the first round, Golden in the second. Golden had 2½ sacks last season after missing the 2017 season with a knee injury.

The Cardinals welcome back star cornerback Patrick Peterson, who missed the first six games after violating the NFL's policy on performance-enhancers.

He should help a secondary that's leaned on several rookies, including cornerback Byron Murphy Jr. and safeties Deionte Thompson and Jalen Thompson. The Cardinals are giving up more than 281 yards passing, No. 30 in the league.

The Cardinals hope Peterson's presence allows them to move around other players to better cover opposing tight ends. Falcons TE Austin Hooper was the latest to dominate Arizona's defense, catching eight passes for 117 yards and a touchdown.

The Cardinals are excellent on special teams. Kicker Zane Gonzalez leads the league in scoring with 58 points while Andy Lee is third overall in punting with a 44.8-yard net average. The Giants gave up a touchdown on a blocked punt against the Patriots. Kicker Aldrick Rosas has not had much work, hitting on four of five field-goal attempts.