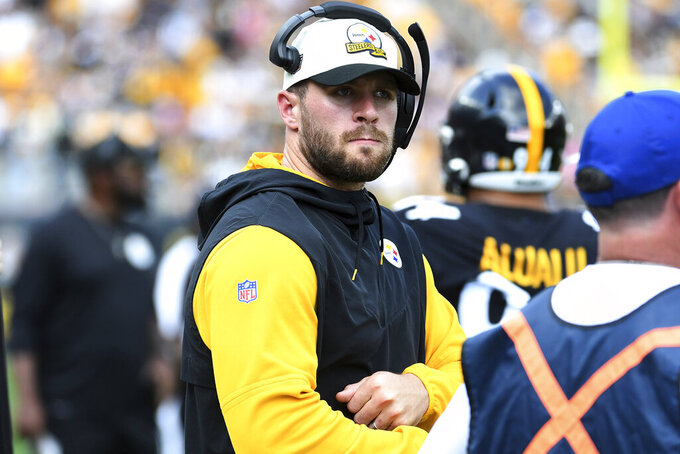 Pittsburgh Steelers linebacker T.J. Watt stands on the sideline during the first half of an NFL football game against the New England Patriots in Pittsburgh, Sunday, Sept. 18, 2022. (AP Photo/Phil Pavely)

PITTSBURGH (AP) — The Pittsburgh Steelers knew what was coming. More specifically, they knew who was coming. And it didn't matter.

Cleveland running back Nick Chubb went wherever he wanted during long stretches of a 29-17 victory over the Steelers on Thursday night, nevermore so than early in the fourth quarter when the Browns put together an 11-play 80-yard drive that ended with Chubb's 1-yard fourth-down dive that gave Cleveland a two-score lead.

Ten of those plays came on the ground, eight of them handoffs to Chubb, who finished with 113 of the 171 yards rushing the Browns piled up on the ground against a defense that offered little pushback without injured All-Pro outside linebacker T.J. Watt.

“We have to be better with the run,” defensive tackle Cam Heyward said. “We cannot blame anyone but ourselves. Where the game was going, it came down to whose runner was going to get stopped first, and as a defense we did not take care of that.”

Four days after New England was able to bleed the final 6:33 of a taut 17-14 win by playing keepaway with running back Damien Harris, Cleveland did much of the same. The Browns held the ball for more than 36 minutes, all of them with Watt watching from the sideline in sweats, his left pectoral still in the early stages of recovering from a tear suffered in Week 1 against Cincinnati that sent him to injured reserve.

The NFL's reigning Defensive Player of the Year worked out on the field before the game and will return at some point, though who knows what Pittsburgh's season might look like by then. The Steelers are 0-6 without Watt since he arrived in the first round of the 2017 draft.

Watt is a game-plan wrecker and a chaos agent in his prime whose presence can cover up a lot of flaws — including in 2021 when the Steelers slipped into the playoffs despite having the league's worst rush defense.

Pittsburgh's offseason plan included hoping defensive tackle Tyson Alualu would be back at full strength at age 35 after missing most of last season with an ankle injury and banking on defensive end Stephon Tuitt rediscovering his love for the game after sitting out 2021 with a knee injury. Tuitt opted for retirement instead.

The Steelers re-signed Montravius Adams, drafted lean defensive end DeMarvin Leal and caught a break when Larry Ogunjobi's free-agent deal with Chicago fell through, allowing them to pluck him off the open market in late June.

Pittsburgh's safest path to relevance in 2022 is heavily reliant on a defense that will keep it in games while the offense attempts to figure things out with first-year starting quarterback Mitch Trubisky.

The defense can't simply be OK. It needs to be disruptive. It might even need to find a way to score every now and then.

The unit managed to do both in Week 1, forcing five turnovers — including Minkah Fitzpatrick's pick-6 — and collecting seven sacks in a thrilling and borderline bizarre overtime win in Cincinnati, a game the Steelers survived only after the Bengals missed an extra point and a chip-shot field goal after Watt exited with the left side of his chest in serious pain.

New England proved far more careful with the ball. Cleveland, too. The Steelers have just two sacks and one turnover of the last two weeks. They have two losses two after giving up 295 yards on the ground in the span of just over 100 hours.

If Pittsburgh wants to turn things around, it needs to find a way. Soon.

The offensive line generated a little push in the running game, with the Steelers going over 100 yards for the first time this season. Rookie undrafted free agent Jaylen Warren looks like nice compliment to starter Najee Harris. Warren ran for 30 yards and had 32-yard reception wiped out by a penalty that had nothing to do with the execution of the play.

While the Steelers did sack Cleveland's Jacoby Brissett twice — two more sacks than they had last Sunday against the Patriots — they hit Brissett just four times while he completed 21 of 31 for 220 yards and two touchdowns.

Rookie WR George Pickens showed flashes of the brilliance he displayed regularly during training camp, making an improbable one-handed 36-yard reception in the first half that set up a Harris touchdown.

S Terrell Edmunds is typically steady if not spectacular but couldn't keep up with Browns tight end David Njoku, who caught a game-high nine passes, including a 7-yard touchdown.

CB Ahkello Witherspoon left with an apparent hamstring injury. Otherwise the Steelers made it out of Cleveland relatively healthy.

9-1 — The current combined record for Pittsburgh's next five opponents before its bye week in early November.

A little bit of extra rest before a visit from the New York Jets on Oct. 2.