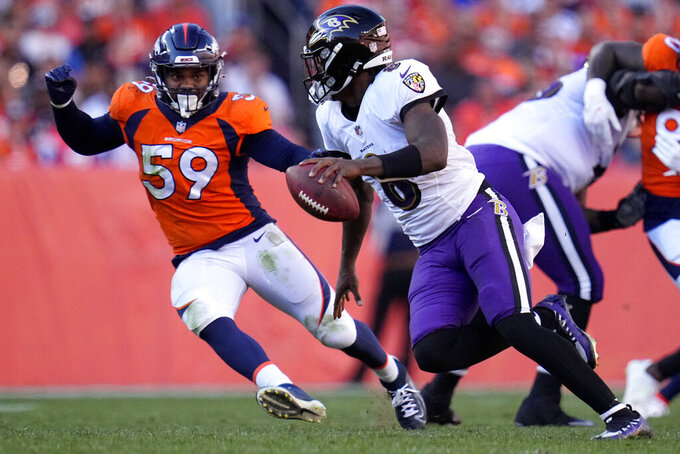 OWINGS MILLS, Md. (AP) — After their first three games went down to the wire, the Baltimore Ravens had a comfortable lead during the final minutes at Denver.

In fact, the only question at the end of this one was whether the Ravens would keep their streak of 100-yard rushing games alive.

They did — drawing the ire of the Broncos in the process — and that was still a big topic of conversation Monday. But for Baltimore, the fact that Sunday's victory did not require a huge rushing performance was actually pretty encouraging.

On the final play of their 23-7 win over the Broncos, the Ravens had Lamar Jackson run for 5 yards instead of taking a knee.

That gave Baltimore 102 yards rushing for the game — and tied an NFL record with the team's 43rd straight game of at least 100 yards.

The reason it took so long to surpass 100 yards rushing was because this was a game largely won through the air. Jackson threw for 316 yards, just 8 shy of his career high in the regular season.

“That’s why we threw it so much,” coach John Harbaugh said. "They were very determined to stop the run. Obviously that was a very important goal for those guys, to keep us under a hundred yards apparently.”

A week earlier, Jackson threw for 287 yards in a win at Detroit. At the time, that was his second-highest total in a regular-season game, but the performance at Denver surpassed it.

Jackson's passing numbers are a mixed bag so far: His passer rating and completion percentage are lower than in 2019 and 2020, but he's also on pace to throw for more than 4,000 yards for the first time — and not just because there's an extra game on this season's schedule.

Jackson is throwing the ball more this year, perhaps because of injuries to key running backs, and it appears Baltimore's focus on improving its passing game is paying dividends. The Ravens have done this without receiver Rashod Bateman, a first-round draft pick who has yet to make his NFL debut because of groin problems.

And none of this has prevented Jackson from continuing to be a rushing threat. He's on pace for more than 1,000 yards there too.

Jackson is the first quarterback in NFL history to reach at least 1,000 yards passing and 250 yards rushing through a team’s first four games of a season.

There's not much to quibble with after this victory over previously unbeaten Denver, but Jackson was sacked three times. The offensive line has had health issues, and that may be starting to impact the running game as well.

The defense finally produced a strong 60-minute performance, holding Denver to 254 total yards. Baltimore had struggled to stop the Raiders and Lions late in games earlier this season, so shutting out the Broncos in the second half was a nice statement.

Ty'Son Williams was Baltimore's top running back option at the start of the season following injuries to J.K. Dobbins and Gus Edwards, but Williams was scratched Sunday. The Ravens went instead with the veteran trio of Latavius Murray, Le'Veon Bell and Devonta Freeman.

Of course, those three averaged just 3.2 yards a carry, so perhaps Williams will get another shot soon.

Harbaugh indicated Bateman and receiver Miles Boykin (hamstring) have a chance to play this week.

40 — The number of consecutive games in which Jackson has either a rushing or passing touchdown. It's the longest active streak by a quarterback, followed by Patrick Mahomes at 29 games.

The Ravens host Indianapolis next Monday night, and Baltimore won't have to travel for a while. After starting the season with three of four games on the road, the Ravens now play four straight at home, with an open date in that middle of that. Their next road game isn't until Nov. 11.