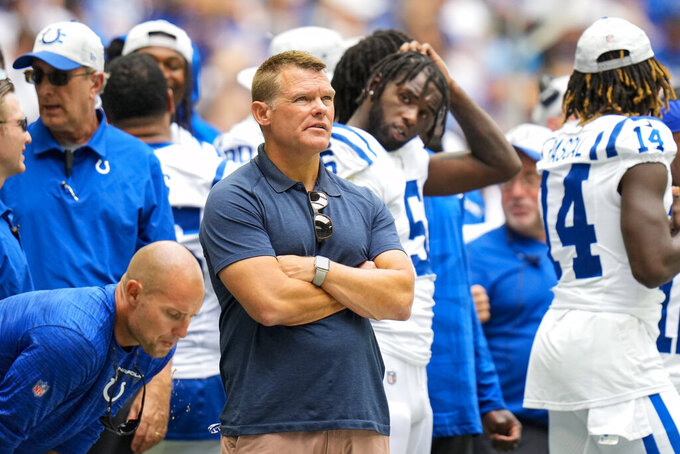 FILE - Indianapolis Colts general manager Chris Ballard stands on the sideline during the second half of the team's NFL preseason football game against the Carolina Panthers in Indianapolis, Aug. 15, 2021. Ballard may use the draft to revamp Matt Ryan's supporting cast. (AP Photo/AJ Mast, File)

He was voted the league's MVP. He nearly won a championship. He overcame coaching changes, COVID-19 protocols and rebuilds.

Now he's starting all over — in Indianapolis.

After four straight losing seasons and a highly publicized effort to find his successor in Atlanta, the soon-to-be 37-year-old quarterback is getting acclimated to a new city, a new offense and an entirely new supporting cast for the first time since his rookie season.

“This is a big change, no doubt about it," Ryan said earlier this week. "I think one of the beauties of being at this point in my career and playing for the number of coordinators I have is that at some point, you’ve kind of done everything in some way, shape or form.”

Breaking in new quarterbacks has become an annual tradition for the Colts.

No, this is not what the Colts envisioned when they traded for Wentz last year or what Ryan bargained for when he signed a five-year, $150 million extension with the Falcons in 2018.

That deal made him the first $30 million per year player in league history.

Indy saw Wentz as a franchise quarterback capable of plugging the void left by Luck's surprise retirement in August 2019. Wentz lasted one season before being sent to Washington.

Ryan became available when the Falcons went all-in on rebuilding and getting him for a third-round pick in March was the next-best solution for Indy.

It came with Peyton Manning's full endorsement, the possibility of becoming the third straight longtime veteran to switch teams and win a Super Bowl and perhaps another contract after this one expires following the 2023 season.

“We view this as very possibly a three-year thing,” team owner Jim Irsay said Saturday. “We hope Matt can be here for even four years, maybe, as we continue looking for a young quarterback.”

There is no indication Ryan's skills are waning. In Arthur Smith's first season with Atlanta, Ryan completed 67% of his throws with 3,968 yards and 20 TDs despite posting his fewest attempts in four years.

Ryan joins a team that has reached the playoffs two of the past four years and just missed making it last season because of an inexplicable season-ending loss at Jacksonville.

Now, with a proven leader, the Colts think they may have found the final piece to make a deep postseason run.

“He’s damn near a coach in himself," offensive coordinator Marcus Brady said after watching Ryan in offseason workouts. "This week and last week he’s really been coaching up the receivers like, ‘This is what I’m looking for, this is what I expect, this is the body lean I want you to have.’ It’s kind of a breath of fresh air to hear that so the rest of the room is not just hearing it from the coaches.”

While Ryan perfected that role in Atlanta, it's also helped him gain instant credibility in Indy.

Despite the compliments and accomplishments, though, Ryan's immediate priority is building bonds in the locker room and finding effective ways to communicate to a group of young receivers that got even younger on draft weekend.

“We certainly want to be disciplined, we want to be detailed, but you don’t want to take away the natural instinct guys have. I think I’ve gotten better at that," Ryan said. “Probably when I was younger it was, ‘Hey, I need it my way. This is how it has to get done.’ There’s certainly still quite a bit of that, but you've got to allow guys to do it — to trust their instincts and go play."

The good news for Ryan is he has plenty to work with.

Indy has three starters back from one of the league's top offensive lines and added left tackle Bernhard Raimann in the third round Friday night. Jonathan Taylor won last year's league rushing title and Michael Pittman Jr. posted his first 1,000-yard season in 2021.

Ballard also has upgraded an already strong defense by adding pass-rusher Yannick Ngakoue in a trade and cornerback Stephon Gilmore, the 2019 NFL Defensive Player of the Year, in free agency.

The combination could help Ryan celebrate another first-time experience — winning a title.

“You talk about it with Tom Brady or Peyton or any of those guys, they’ve had times where they had to transition and both of them have had tremendous success," Ryan said. “In the back of my mind, that’s what I’m thinking about is this opportunity I have for the rest of my career to try and catch that spark and go.”