Ryan looking for committee approach to fill in for WR Ridley 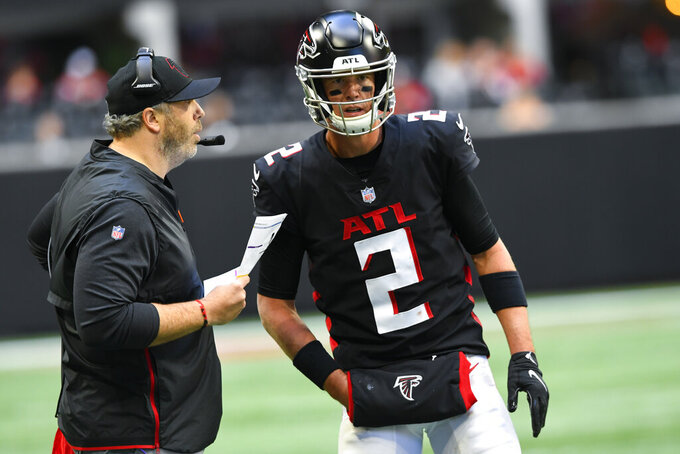 FLOWERY BRANCH, Ga. (AP) — Fantasy football fans trying to figure out which Atlanta Falcons wide receiver to plug in for Calvin Ridley should be warned.

The answer may change every week.

With Ridley out for an indefinite period of time while addressing mental health issues, quarterback Matt Ryan is preparing to pass to multiple players in Sunday's game at New Orleans.

Though Tajae Sharpe had five receptions in last week's 19-13 loss to Carolina as the fill-in for Ridley, Ryan isn't expecting any one player to have the lead role at wide receiver.

“I think it’s by committee,” Ryan said Wednesday. “We want to get production by committee and try and use all of our guys in ways that can help us. We certainly have trust in Tajae. He’s done a great job for us all year.”

It would not be a surprise if Russell Gage, who had no passes thrown his way against Carolina, was Ryan's top option against New Orleans.

It also wouldn't be a surprise if rookie tight end Kyle Pitts, who had only two catches for 13 yards last week, returns to the production he showed by topping 100 yards each of the previous two games.

Perhaps the most consistent option for Ryan has been running back Cordarrelle Patterson, who has 601 combined rushing and receiving yards this season with seven touchdowns.

The only other Atlanta players to have at least 600 scrimmage yards and seven touchdowns through seven games were running back Devonta Freeman in 2015 and wide receiver Andre Rison in 1990.

Patterson and another running back, Mike Davis, each had five catches last week.

“You talk about getting production from not only different guys at the wide receiver group but different position groups,” Ryan said. “We’re lucky we have versatile players, guys that can do a lot of different things. That’s going to help us moving forward.”

Ridley was a last-minute scratch against Carolina.

During the game, Ridley posted an explanation on his Twitter account. He wrote “These past few weeks have been very challenging and as much as I’d like to be on the field competing with my teammates, I need to step away from football at this time and focus on my mental wellbeing.”

Ridley wrote the time away will “help me be the best version of myself now and in the future.” He has provided no timetable on his return.

Asked Wednesday about Ridley's status for this week, Falcons coach Arthur Smith said “I don’t know. Just like anyone with an injury, we’ll get updates, we’ll figure it out. I can’t answer that because I don’t know.”

Saints safety C.J. Gardner-Johnson said Ridley has the support of players around the league.

“You just pray that the guy gets better mentally and everybody in the league just gathers around him as brothers,” Gardner-Johnson said. “Outside this football stuff, mentally, you got to make sure you check on each other. So, I’d rather pray for him, forget football, and make sure he’s fine, his family’s fine.”

Gardner Johnson said he is “not really focused on what their offense loses” but instead is "hoping that one of our NFL brothers can get his thoughts back together, come back ... just ready to play football again, whenever he’s ready.”

Ridley also missed the Falcons' 27-20 win over the New York Jets in London on Oct. 10 for what was then described only as personal reasons. He returned to make a touchdown catch in Atlanta's 30-28 win at Miami on Oct. 24.

Now with more known about the reason for Ridley's time away from the team, the Falcons are supporting their teammate.

When asked if he has reached out to Ridley, Ryan said “I think that’s personal. I think the No. 1 thing is we all love and support him, wish him the best. Whenever it is that he’s back here, we’re going to welcome him back with open arms.”