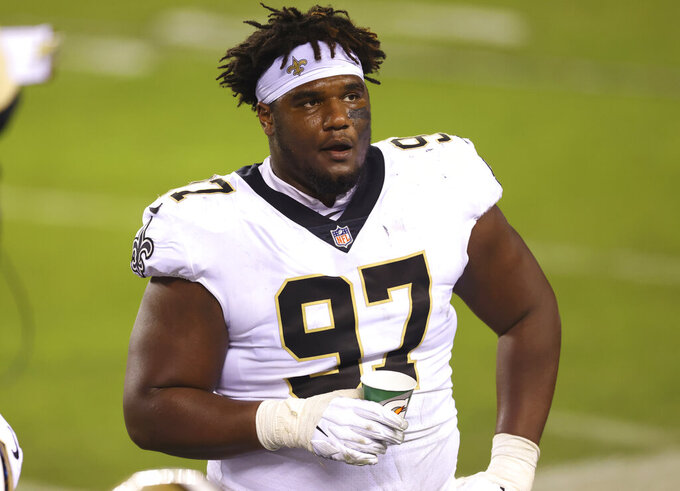 FILE - In this Dec. 13, 2020, file photo, New Orleans Saints' Malcolm Roach looks on during the third quarter of an NFL football game against the Philadelphia Eagles in Philadelphia. Saints defensive tackles Roach and Shy Tuttle say they see the humble beginnings to their NFL careers as an asset as they see to take over as starters this season. The Saints will enter the regular season missing their top three interior defensive linemen from 2020. (AP Photo/Rich Schultz, File)

METAIRIE, La. (AP) — As Saints defensive tackles Malcolm Roach and Shy Tuttle have sought to make the jump from inexperienced reserves last season to opening-game starters this year, they've discussed how their humble beginnings as undrafted pros could help them.

It's “something me and him talk about a lot, just knowing we had to come up here the hard way," Roach said after a recent training camp practice. "We had to earn everything. ... If something was easy, I feel like you wouldn’t cherish the position you’re in as much.”

That’s put a spotlight during training camp on the young players looking to fill the void.

“Well, I look at it as an opportunity,” defensive line coach Ryan Neilsen said. “There’s a bunch of snaps out there and we’ll see when we sort it all out at the end of camp who gets those snaps.”

Tuttle, who made his NFL debut with New Orleans in 2019, has played in 29 games with four starts. He has two sacks among 45 career total tackles and even intercepted one pass.

Last season, Roach made his NFL debut and saw action in nine games, making 16 total tackles without a sack.

“When I came in here last year, I was raw. I was just out here playing football. I really didn’t understand the defense,” Roach said. “Now I know little things like why I’m filling this gap and where the linebacker’s going, things like that. Just that development process has taken me a long way. I’m able to go out there and play fast and really understand what I’m doing.”

The Saints have confidence in 6-foot-3, 300-pound Tuttle and the 6-3, 290-pound Roach because of their “effort, energy, toughness — the intangibles,” Nielsen said. "Those guys got it all. They run to the football. They’re tough in the middle. You know, any good defense you’re up against, they’re good in the middle. Those two guys have been good in the middle. And look, they’re still young players. ... So, I still want to see improvement.”

Also competing along the interior include: Jalen Dalton, a third-year pro out of North Carolina; Ryan Glasgow, a fifth-year pro out of Michigan; Albert Huggins, who is in his third pro season out of Clemson; Rookie Josiah Bronson out of Washington; and former Louisiana-Lafayette player Christian Ringo, now in his sixth pro season.

Roach said he learned a lot last year from Brown, Rankins and Onyemata, and now is trying to pay it forward to the newly acquired or less experienced players in his position group.

“Now we’ve got more undrafted players in that room and I’m trying to do a great job of showing them the way,” Roach said, adding that he's “making sure those guys come in and just know that they’re welcome here, just know that we’re going to work, going to compete and just know they got to earn everything.”