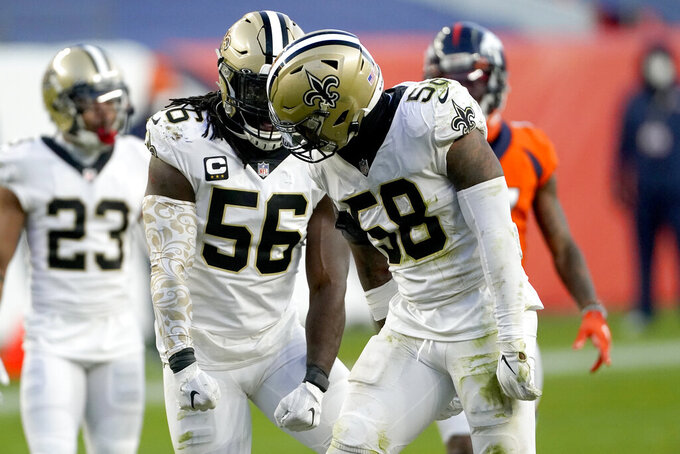 New Orleans Saints outside linebacker Demario Davis (56) and outside linebacker Kwon Alexander (58) celebrates a defensive stop against the Denver Broncos during the second half of an NFL football game, Sunday, Nov. 29, 2020, in Denver. (AP Photo/Jack Dempsey)

NEW ORLEANS (AP) — As far as Saints coach Sean Payton is concerned, there were meaningful storylines coming out of New Orleans' lopsided victory at Denver that had nothing to do with the Broncos being forced to play without a true NFL quarterback.

The Saints, after all, scored 31 points against a Denver defense that was not similarly short-handed. And New Orleans did so without record-setting quarterback Drew Brees or two starting offensive linemen — tackle Terron Armstead (COVID-19) and guard Andrus Peat (concussion) — on the left side of the line.

Payton decided a conservative, run-heavy offensive game plan was in order when he learned all four of Denver's quarterbacks would be ineligible to play on Sunday because of their failure to strictly adhere to NFL COVID-19 protocols. Saints fill-in starter Taysom Hill attempted 16 passes and New Orleans still won by four touchdowns while holding a more than 10-minute advantage in time of possession.

The Broncos knew they had to stop the run to have any chance of keeping the game competitive — and they couldn't. Denver started Kendall Hinton, a practice-squad wide receiver, at QB, and he completed one pass.

“If there was one thing that was going to happen, if you lost all your quarterbacks, it's that you were going to bow up defensively,” Payton said of the Broncos. "So, look, I was proud of how we ran the football. I thought our guys up front, towards the end of the game, we won that battle pretty clearly.”

The success of Payton's offense in Denver served as the latest example of the depth and adaptability New Orleans possesses as the Saints close in on a fourth straight playoff appearance. They've won eight straight — the first four without receiver Michael Thomas, the 2019 AP Offensive Player of the Year, and the past two without Brees, the NFL's all-time leading passer.

The Saints are winning with defense, too. Sure, New Orleans was expected to dominate Denver's severely limited offense. But the Broncos' three points matched what Tom Brady's Buccaneers scored against the Saints four games earlier. And Atlanta's Matt Ryan couldn't get the Falcons in the end zone at New Orleans two weeks ago, either.

The Saints have now allowed just one TD in four games and rank first overall defensively in the NFL.

“We’ve eliminated some of the big plays that were coming earlier in the year. And then most importantly, is third down and red zone defense has gradually gotten better,” Payton said. “I’m pleased with how we’re playing situational defense. Yesterday obviously was a uniquely different deal, but we’re getting off the field on third down, and I think we’re affecting the quarterback more than we were earlier in the year.”

The running game. The Saints rushed for 229 yards and four TDs on Sunday against a Denver defense that on average has allowed 100 yards fewer on the ground per game. All but 7 of New Orleans' yards rushing came on 40 combined carries by Latavius Murray, Alvin Kamara and Hill.

“I feel like we could do that every week,” Kamara said. “We know we can run the ball. ... It’s not a surprise doing what we know we can do.”

Very little at this point, but the Saints are accustomed to more efficiency in the passing game than they enjoyed in Denver. The Saints completed just nine of the 16 passes they attempted (56%) for 78 yards and took three sacks. For the season, the Saints have been completing closer to 73% of their passes and have been allowing 1.73 sacks per game.

Murray rushed for 124 yards and two TDs on 19 carries, including a 36-yard score in which he used a hesitation move and cutback to wrong-foot defenders along the line of scrimmage before bolting down the middle of the field. It was Murray’s most carries in a game this season and his first game of the current campaign with more than 100 yards rushing.

Hill drew praise from Payton for how he managed a conservative game plan, and the Saints won easily. But Brees’ backup resembled a work in progress as a passer in Denver, taking a step back from his first start a week earlier. Hill was intercepted once, made another throw into double coverage that was nearly intercepted, took three sacks, did not throw for a touchdown and had a 43.2 passer rating. Hill is still looking for his first career TD pass.

7 — The number of consecutive games won by the Saints when Brees has not been available. They went 5-0 with Teddy Bridgewater in 2019 and are now 2-0 with Hill this season.

The Saints play their second straight road game and meet the Falcons for the second time in three weeks when they visit Atlanta on Sunday.

By Teresa M. Walker 43 minutes ago
By Greg Beacham an hour ago
By Dave Campbell 2 hrs ago
By Maryclaire Dale 3 hrs ago
By John Wawrow 5 hrs ago