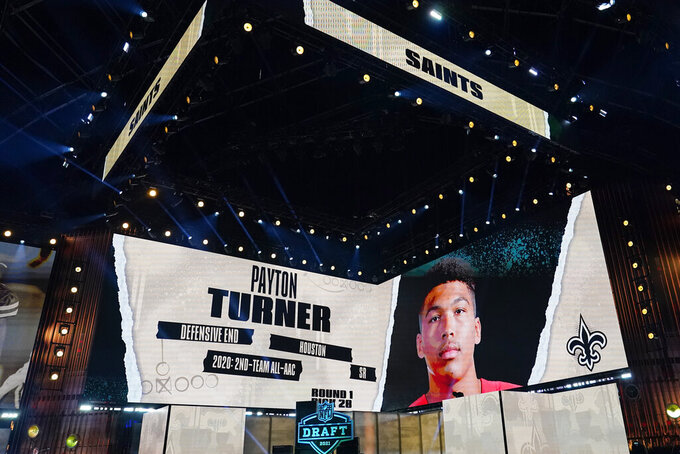 An image of Houston defensive end Payton Turner is displayed on stage after he was chosen by the New Orleans Saints with the 28th pick in the first round of the NFL football draft Thursday April 29, 2021, in Cleveland. (AP Photo/Tony Dejak)

The decision to take the 6-foot-5, 270-pound Turner comes after Saints 2020 sack leader Trey Hendrickson, who had a career-high 13 1/2 sacks last season, chose to leave New Orleans for Cincinnati.

Although Turner played in just five games for Houston last season, he had five sacks and 10 1/2 tackles for losses, along with a forced fumble.

“There was a couple bumps in the road but I think I showed a glimpse of what I can do,” Turner said after being drafted.

Turner was sidelined with an upper calf strain in 2020 and also tested positive for COVID-19 during the season.

In terms of snaps, Turner estimated that he really just played the equivalent of 3 1/2 games.

“We really had this player as someone you couldn’t help but notice,” Payton said. “There were too many things that we felt gave this guy a lot of chances to be successful in our league.”

Turner also played at defensive tackle earlier in his college career, which he said “really helped me just being more physical on the edge when I did transition to the edge.”

Turner now joins a roster that already has two starting defensive ends in 10-year veteran Cameron Jordan and fourth-year pro Marcus Davenport, a 2018 first-round pick whose fifth-year option was picked up by the Saints earlier on Thursday.

But he could see considerable playing time as a rookie nonetheless. Last season, the Saints often rotated in three or four defensive linemen throughout games, sometimes deploying a pass-rushing package with three ends on the field together.

“He’ll play and earn those (snaps) this first year," Payton predicted when asked how immediate he expected Turner's contributions to be. "We’ll have a clear vision for his role.

“He’s got great size, great length. You see a powerful player,. You see him play inside," Payton added. "There were too many things that we felt real good about.”

The bigger need for the Saints was arguably at cornerback. But New Orleans was unable to trade up before four of the top-rated cornerbacks in the draft had been selected by other clubs.

“We feel like it’s our job to speak with people in front, just find out their appetite" for a trade, Payton said. “So, we definitely were on the phone with a number of teams in front of us. ... More than half of then didn’t really have any interest.”