Saquon Barkley's touches not an issue with New York Giants 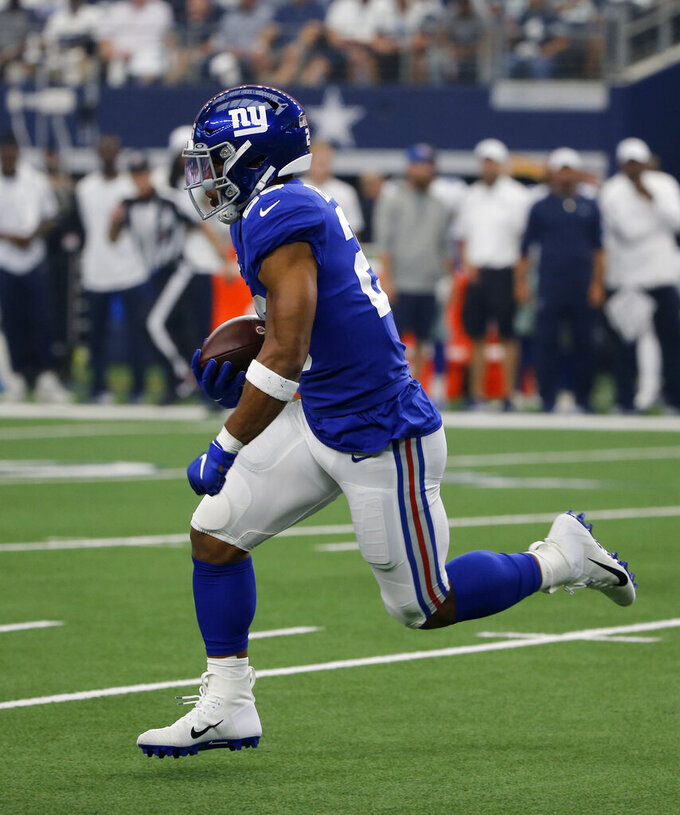 New York Giants running back Saquon Barkley runs the ball in the first half of a NFL football game against the Dallas Cowboys in Arlington, Texas, Sunday, Sept. 8, 2019. (AP Photo/Michael Ainsworth) 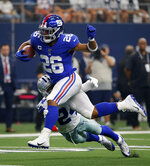 EAST RUTHERFORD, N.J. (AP) — Saquon Barkley has become a touchy topic for the New York Giants after their season-opening loss to Dallas.

Touch is the key word.

Barkley had 15 touches in the 35-17 loss to the Cowboys and many felt it wasn't enough for last year's NFL Offensive Rookie of the Year.

The statistics on those 15 touches were impressive. Barkley carried 11 times for 120 yards, including a 59-yard run on his first carry, and he caught four passes for 19 yards. That's 139 total yards.

The problem is the Giants ran 66 plays, so Barkley touched the ball roughly 23% of the plays.

"We all know that Saquon is a focus of our offense," coach Pat Shurmur said Thursday before the Giants practiced for their home opener against the Buffalo Bills (1-0) on Sunday. "He's also, smartly, the focus of the teams that are defending us. His charm is that you can hand it to him or throw it to him. Yeah, we want him to get the football. It makes sense for him to get the football. Each game plays out differently."

Shurmur said the Giants only had four possessions in the first half and they had to throw more in the second when they fell behind 28-10. Had the score been closer, the scenario might have been different.

"I'm willing to do whatever it takes to help the team win," Barkley said. "If we play better than we did last game, and we execute what we need to execute, I don't think the conversation will be about 15 touches. I think we find a way to win that game. But at the end of the day, Dallas made more plays than us. We just have to find a way to do that better next game."

If there was a main concern for some fans, it was some of the play calls.

With the game tied 7-7 in the first quarter, the Giants had a third-and-1 at the Cowboys 35. They opted for a pass to Barkley and Manning was called for grounding.

In the third quarter with the Giants down 28-10, they had a third-and-2 from the Dallas 8. Fullback Eli Penny gained a yard on third down and the fourth-down play was a bust as Manning rolled out and was sacked.

Barkley might have been the better option on both short-yardage situations.

Barkley isn't overly concerned about the team after getting beaten badly.

"I feel like it's more everyone outside of our locker room that's panicking," he said. "When you break it down, there are 32 teams in the NFL. Half of those teams lost last week, besides two of them that tied. But half of those teams lost. Any team in the NFL, just because you won big doesn't mean you're going to go 16-0. Just because you lost badly doesn't mean you're going to go 0-16. Don't panic. Just find a way to get better every single week."

"I sense that Saquon wants to win, and he'll do it in whatever role," Shula said. "He is the ultimate team player. He's locked in just like he's been since the minute he got here on how he and the other offensive guys can help us win."

NOTES: WR Sterling Shepard missed his second straight practice with a concussion. Fellow receiver Cody Latimer was sidelined Thursday with a calf problem. ... DL Dexter Lawrence (shoulder) was again limited. LB Markus Golden (hip) and G Kevin Zeitler (shoulder) practiced fully after being limited Wednesday. ... Analytics anyone? Barkley on being caught by Chidobe Awuzie on 59 yard run. " It's the NFL. People are going to make great plays and take great angles, and he was moving I think 22.8 (mph). I was running like 21.8. Respect to him. He made a great play."