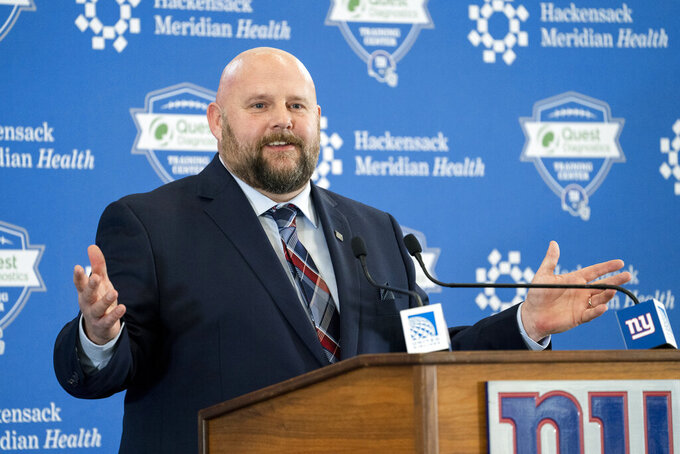 EAST RUTHERFORD, N.J. (AP) — Joe Schoen had a routine on draft day when he was the assistant general manager of the Buffalo Bills.

He would get in a round of golf and then head to the office to help general manager Brandon Beane for three days of making draft picks to help the Bills become one of the best teams in the AFC.

As the general manager of the New York Giants, Schoen is probably going to alter the routine. The pressure is on to get the team back to the postseason for the first time since 2016. The round of golf may have to wait.

“Probably too anxious to golf,” Schoen said. “Probably come in, get a workout in, make some phone calls, call around the league, call other general managers, see if you can get any information on what’s going on in front of you. Again, probably take some calls if people are calling or looking to move up.”

The Giants, who went 4-13 in Joe Judge's second and final season as coach, are in an enviable position for the draft. They have their own pick at No. 5 overall and the No. 7 choice they got from the Bears last year for trading down in the first round. Chicago took quarterback Justin Fields at No. 11 and the Giants grabbed receiver Kadarius Toney at No. 20.

It's the first time New York has had two picks in the top 10, which should help new coach Brian Daboll. It has nine picks overall, all in the first six rounds.

The roster has a ton of holes after five straight losing seasons. The offense is desperate for a tackle and later either a tight end or wide receiver. The defense needs an edge rusher and either a cornerback or safety, with much depending on the status of veteran cornerback James Bradberry.

“Having two top-10 picks, it’s definitely a good way to set the foundation, get two really good players early on,” Schoen said. “Again, you’re not sitting at 15 or 20, trying to figure out who is going to be there. The fact that we can list seven players, know that we’re going to get two of them, makes it a little bit easier.”

Schoen is open to moving either up or down in the draft, but he insists any first-round deal would have to blow his doors off. His goal for the Giants is to compete today and build for tomorrow, which makes this draft crucial.

“For Brian and I, it’s our first two picks as New York Giant head coach and general manager,” Schoen said. “In terms of foundational pieces, in terms of being good players, the type of people we want, it’s very important.”

The offensive line was decimated by injuries and it was a big reason New York struggled last season. Left tackle Andrew Thomas is outstanding. Schoen signed center Jon Feliciano and guard Mark Glowinski in free agency. Shane Lemieux, Max Garcia, Ben Bredeson and Nick Gates will compete for a guard spot. For the other tackle, either Evan Neal of Alabama and Ikem Ekwonu of North Carolina State would be solid choice at No. 5.

With Bradberry and Adoree Jackson, the Giants should be set at cornerback. Bradberry has a nearly $22 million cap hit and that is a problem. Schoen said it is conceivable he will stay with the team, but New York also could trade him. It would create a hole. Either Ahmad Gardner of Cincinnati or Derek Stingley Jr. of LSU seem ready to step in. New York has two second-year cornerbacks returning — Aaron Robinson and Rodarius Williams.

WHAT TO DO WITH DANIEL

The Giants are getting to the make-or-break point with quarterback Daniel Jones. The sixth pick overall in the 2019 draft has a 12-25 record as a starter in three seasons. He missed the final six games in 2021 with a neck injury. If he struggles again, Schoen may have to think about taking a quarterback or trading down to build collateral for next year's pool of QBs. Signing veteran Tyrod Taylor is a security blanket for this year.

Only three years ago, the Giants had three first-round picks. They took Jones, grabbed defensive tackle Dexter Lawrence at No. 17 and wasted a choice at No. 30, taking cornerback DeAndre Baker. He was charged in connection with an armed robbery after his rookie season and released in September 2020. The charges were eventually dropped. Jones and Lawrence haven't met expectations, yet. Lawrence is run stuffer who has not generated a lot sacks.

The Giants were so bad the past few seasons anybody they take should be an improvement. Thomas, third-year safety Xavier McKinney, DL Leonard Williams and LB Azeez Ojulari and PK Graham Gano top the roster. If they go for an edge rusher, the might look at Oregon’s Kayvon Thibodeaux and Georgia’s Travon Walker.