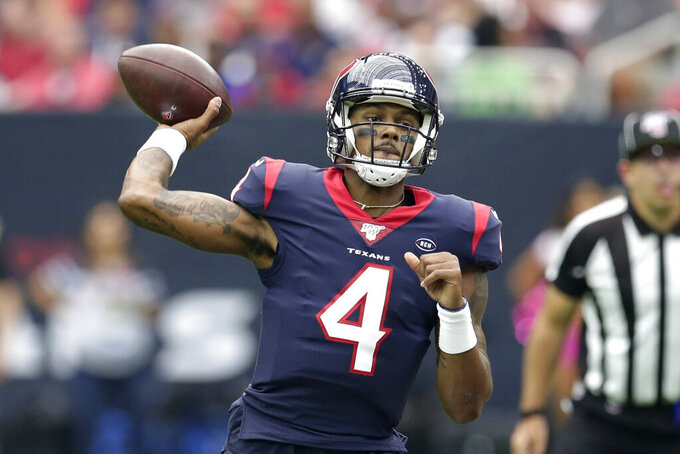 FILE - In this Oct. 6,2019, file photo, Houston Texans quarterback Deshaun Watson (4) throws against the Atlanta Falcons during the first half of an NFL football game in Houston. Houston scored the second-most points (53) in franchise history last week against Atlanta. Watson is possibly the second-most exciting quarterback in the league behind Kansas City Chief's Patrick Mahomes. (AP Photo/Michael Wyke, File)

The Seahawks were supposed to be continuing their retool this year, one season after their remake helped get them back into the playoffs. Instead, they have one of the NFL's best records.

The Browns were pegged (hyped?) to be a budding powerhouse with all of the improvements in talent, plus the predicted maturity of Baker Mayfield in his second pro season. Instead, they are perhaps the most inconsistent team in the league, with Mayfield struggling.

A Seahawks victory, combined with a 49ers loss to the Rams, would put Seattle on top of the tough NFC West. But it's difficult to figure out which Browns squad they will face: Will it be the team that won in Baltimore, or the team that was blown out last Monday night in San Francisco?

"I don't think it was my best assignment as a teacher," Seahawks coach Pete Carroll said of telling his players to watch Browns-49ers. "The game didn't work out. I was hoping it was going to be a real battle. The game kind of got lopsided, so it wasn't as beneficial. It's still really good to see the guys. You hear the stories about the players and the backgrounds. The guys will come in here today are much more familiar with them because of that. In that regard, it's always helpful. Too bad it wasn't a better game."

Will it be a better performance by the Browns on Sunday?

"We have done it before," running back Nick Chubb said. "After every loss we have, we came back harder. That is what I expect this team to do every time. Hopefully, we can stack some wins, but I know when we do face adversity, we bounce back harder."

Week 6 began with the New England Patriots' 35-14 victory over the New York Giants. Rookie quarterback Daniel Jones and the Giants (2-4) kept it close, trailing by a touchdown midway through the fourth quarter, but a forced fumble by Jamie Collins led to a TD that gave the Patriots a cushion. New England forced four turnovers, and Tom Brady had two touchdown runs and moved ahead of Peyton Manning for second place on the NFL's all-time passing yards list. The reigning Super Bowl champions are 6-0 for the first time since 2015.

The other two contenders out west; isn't that delightful for this long rivalry?

The Rams have lost two in a row as their defense has sprung holes. The Niners came off their bye and routed Cleveland.

A key for the Rams' defense is stopping the 49ers early in the second half; they have scored a touchdown on the first possession in all four games this season. Slowing down the running game would help: San Francisco ran for 275 yards vs. Cleveland and lead the NFL with 200 yards rushing per game.

For LA, the most efficient offense has come through the air. The Rams are the only team with three receivers with 325 yards receiving: Cooper Kupp, Brandin Cooks and Robert Woods. Kupp is second in the NFL with 41 catches and ranks fourth with 505 yards and four TDs.

The scoreboard might blow up from all the points these two could produce.

Houston scored the second-most points (53) in franchise history last week against Atlanta. Deshaun Watson, possibly the second-most exciting quarterback in the league behind KC's Patrick Mahomes, has perhaps the most thrilling receiver in DeAndre Hopkins.

No slouches on defense, the Texans have forced a turnover in 18 straight games, the longest active streak in the NFL.

But Mahomes has thrown 202 consecutive passes without an interception. Alex Smith has the franchise record of 312.

An early riser (9:30 a.m. EDT) in their second matchup of the season. The Bucs won in Carolina.

This is the first overseas regular-season match for the Panthers. If British fans were looking forward to seeing Cam Newton, Kyle Allen has been a superb replacement. Allen has won all four career starts, three this season, with seven TDs, no interceptions, making him the first quarterback in the Super Bowl era to win his first four starts with no INTs. And the Bucs allowed more than 300 yards passing in each of the past four weeks.

Panthers RB Christian McCaffrey's 866 yards from scrimmage are the second most through five games in NFL history to Jim Brown's 988 in 1963. Pretty good company there.

Not quite the same as the Eagles' previous trip to Minnesota, when they beat the Patriots for their first Super Bowl title on Feb. 4, 2018.

Main matchup here is the NFL's No. 3 rushing offense, led by No. 2 rusher Dalvin Cook, against the best run defense. Cook trails only McCaffrey.

Last week against the lowly Jets, Philly became the first team in NFL history with 10 sacks and two defensive TDs in a single game.

They are not chanting "Drew Who?" in the Big Easy. At least not yet.

But Teddy Bridgewater has stepped in for Drew Brees (thumb surgery) and quarterbacked the Saints to three straight victories. Two were against 2018 playoff teams, the Cowboys and the hated Rams, who, helped by a major officiating gaffe, beat New Orleans to get to the Super Bowl. He has a passer rating or 100 or higher in two of his past three road starts.

It helps to have the most productive receiver, Michael Thomas, with 45 catches and 543 receiving yards.

Jacksonville also is missing its veteran starter, Nick Foles. Rookie Gardner Minshew is one of three QBs in the Super Bowl era with a 100-plus rating and no interceptions through his first four career starts. RB Leonard Fournette seeks his third consecutive 100-yard performance. He had runs of 48, 81 and 69 yards the past three weeks.

The only division with a single winning team, and the Ravens came up with a big one in overtime last week at Pittsburgh to grab the AFC North lead.

Lamar Jackson's 11 TD passes rank second in the NFL behind Seattle's Russell Wilson (12), and Baltimore's 961 yards rushing are second most in franchise history after five games.

The Bengals still are looking for a first win under coach Zac Taylor. They're 0-5 for the seventh time since 1990, most in the NFL over that span. This is their worst start since Marvin Lewis' team went 0-8 in 2008.

Kliff Kingsbury got his first victory as Cardinals coach in Cincinnati. But Arizona ranks 24th in pass defense, while Atlanta is third in yardage throwing the ball.

Worth watching are Cardinals WR Larry Fitzgerald and Falcons WR Julio Jones, who have combined for 100 games with at least 100 yards receiving. Jones has 51, Fitzgerald 49.

The Cardinals and Falcons are tied for No. 1 with 11 forced fumbles.

Speaking of turnovers, Marcus Mariota is the only quarterback to start every game in 2019 and have no turnovers. The Titans are the sixth team since the 1970 merger to have just one turnover through their first five games. They do have nine fumbles, but recovered eight, a lost muff on a punt return by Adoree Jackson is the only blot.

Denver has lost both home games on last-second field goals. One way to turn that around would be for star LB Von Miller to start getting to quarterbacks. Miller has 10½ sacks in his past 10 home games but just two sacks this season.

Sam Darnold returns from mononucleosis, and the Jets were inept on offense in the three games he missed. They have played some tough teams (Philly, New England, Buffalo) and were not competitive since the opening half against the Bills in Week 1.

This is a matchup of the top-ranked offense against the worst. The Cowboys are averaging 453 yards per game to 180 for the Jets.

Pittsburgh has dropped its past three and eight of its past nine on the West Coast. The Steelers will start rookie free agent QB Devlin Hodges, the all-time passing leader in FBS at Samford (14,584 yards). Hodges was 7 of 9 for 68 yards after coming in against Baltimore when Mason Rudolph left with a concussion after a hard hit by Earl Thomas.

Chargers QB Philip Rivers did not direct a TD drive last week for only the ninth time in 224 starts. Yet Austin Ekeler had a career-high 15 catches in the loss to Denver and leads the AFC in receptions with 39. WR Keenan Allen is second with 38.

The Lions come off a bye, while the Packers come off perhaps their most impressive win in years. They ran all over Dallas, led by a different Aaron than quarterback Rodgers — Aaron Jones — who rushed for 107 yards and four TDs.

"All my family was up in the stands," said Jones, who grew up a Cowboys fan about 600 miles away in El Paso, Texas, and played for the hometown UTEP Miners. "I could see my brother right there. I threw him one of the balls when I scored. That was pretty cool. Just being back in Texas."

Detroit is a mere 30th against the pass, so the usual heroic Aaron in Green Bay could be flinging plenty of footballs.

Not a bad opponent for Bill Callahan to face as he takes over as Redskins coach. Yes, the Dolphins are coming off a bye, but all that seems to mean with the way they have been performing with a weak roster is they didn't lose.

The loser in a way is a winner, taking the lead in the race for the top overall draft pick next April.