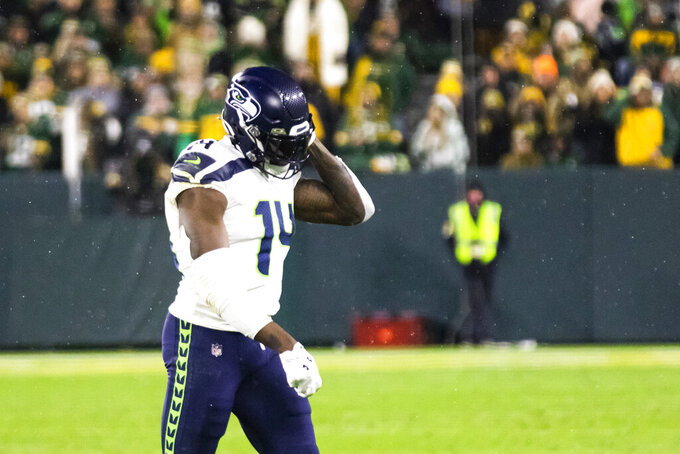 Seattle Seahawks wide receiver DK Metcalf walks off the field after being ejected in the fourth quarter during an NFL football game against the Green Bay Packers, Sunday, Nov. 14, 2021, in Green Bay, Wis. (Adam Niemi/The Daily Mining Gazette via AP)

RENTON, Wash. (AP) — Russell Wilson's valiant effort to return ahead of schedule from a finger injury gave the Seattle Seahawks a built-in explanation for what happened against Green Bay.

At least to some observers, the surgically repaired middle finger on Wilson's right hand explained his terrible game throwing the ball and a few poor decisions that led to Wilson getting shut out for the first time in his NFL career.

But Wilson, coach Pete Carroll and others didn't want to use his health as an excuse. Because of that, they may have acknowledged that Seattle's offense has much deeper problems.

The Seahawks (3-6) were shut out for the first time in 10 years, and their 17-0 loss to the Packers highlighted issues that have emerged throughout the season.

“We’ve got to get the ball to our playmakers and let them make plays,” Metcalf said.

Wilson forced throws at times, none worse than his two interceptions in the end zone.

Seattle held the ball for less than 21 minutes, leaving its defense — which played well — exhausted in the fourth quarter. The Seahawks finished with 208 yards, the sixth fewest in any game Wilson has played.

“We were disappointed,” Carroll said. “And we go back to every play, we’re looking at every play that could have gone the other way — completions, runs — and we’re just frustrated we’re not finding the rhythm that we need to.”

Seattle's defense had improved over the past month and those performances were validated by its showing against Aaron Rodgers and the Packers.

The defense played well enough to win before finally wearing down in the fourth quarter.

The Seahawks gave up 393 total yards, but held the Packers to 3.3 yards per carry and 5.6 yards per play. That ought to have been good enough had Seattle’s offense done its part.

If Seattle wants to find balance in its offense, it has to give its running backs more than 11 carries. Alex Collins had 10 rushes for 41 yards, Travis Homer got one handoff and the other five runs were by Wilson. Opponents will happily drop into coverage and bring a minimal rush if the Seahawks can’t run the ball.

For all the criticism he’s received, Jamal Adams deserves some recognition for his play of late. Against Green Bay, Adams had 11 tackles, two quarterback hits and his first interception since joining the Seahawks, and he was solid in pass coverage.

Adams may not be making the same impact he did a season ago when he was used heavily as a pass rusher, but he seems to be finding a way to contribute without sacks.

Carlos Dunlap’s disappointing season continued Sunday with a new twist. Last year, Dunlap's arrival coincided with an uptick in Seattle’s pass rush. This season, he has one half-sack and he failed to record a QB hit against the Packers.

But the more glaring mistake he made against the Packers was throwing the shoe of a Green Bay offensive lineman in the fourth quarter. Instead of facing a third down, the shoe toss drew a personal foul penalty and moved Green Bay inside the Seattle 30. The Packers went on to score a touchdown that made it 10-0.

Carroll said Dunlap apologized to the team after the game.

All eyes will be on Chris Carson this week. The starting running back hasn't played since Week 4 because of a neck issue. Carroll sounded ominous on Monday when he said the team would have an update on Carson in a couple of days. Seattle was hopeful Carson would be able to return at the same time as Wilson. ... Carroll said LT Duane Brown has a hip strain but it doesn’t appear serious. ... DB Ryan Neal is in the concussion protocol.

183: Seattle had gone 183 consecutive games — regular season and playoffs — since last being shut out. It was the 12th time in franchise history the Seahawks were held scoreless.

The Seahawks' season could come down to Sunday’s matchup against Arizona (8-2). Despite having one of the worst records in the NFC, Seattle is only 1 1/2 games out of a playoff spot. A win over the Cardinals and a manageable upcoming schedule give Seattle a chance to get back into playoff contention. A loss, and the hole may be too deep for Seattle to overcome.