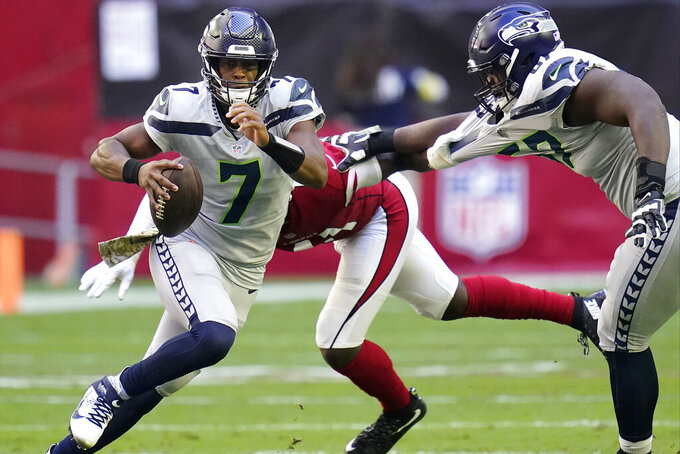 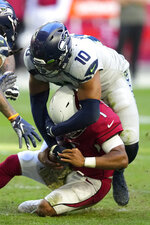 GLENDALE, Ariz. (AP) — Geno Smith has spent the first half of the season making game-winning plays that have moved the surprising Seahawks to the top of the NFC West.

His impressive response to a potential game-losing play is evidence Seattle's rise isn't a fluke.

Smith lost the lead for Seattle in the third quarter by throwing a pick-6, but then led the offense on touchdown drives of 75, 81 and 85 yards down the stretch, pushing the Seahawks to a 31-21 victory over the Arizona Cardinals on Sunday.

“What a bounce back, what a fantastic finish to this game,” Seahawks coach Pete Carroll said.

Smith threw for 275 yards and two touchdowns while rookie Kenneth Walker III ran for 109 yards and two scores. The Seahawks have won four straight games while the Cardinals (3-6) have lost four of five.

For a moment, the Seahawks looked like they were in trouble. The Cardinals grabbed a 14-10 lead in the third quarter when Zaven Collins returned an interception 30 yards for a touchdown.

Smith said all he could do was acknowledge that Collins made a great play and then work on making amends.

“The NFL's full of guys like that who make tremendous plays,” Smith said. "Sometimes things are going to happen where the ball doesn't bounce your way. It's how you respond. I think we responded great as a team.

“Going three straight drives, finishing with touchdowns, they were long drives, tough drives. Everyone in the stadium knew the magnitude of those drives. For us to go down, get scores, get touchdowns, it shows the type of team we are.”

Seattle took the lead for good late in the third quarter on Smith's 9-yard touchdown pass to Tyler Lockett. That capped a 13-play, 75-yard drive.

The Seahawks extended their advantage to 24-14 midway through the fourth. Smith led a 13-play, 81-yard march that ended when Walker ran for a 1-yard score.

Walker — a second-round pick out of Michigan State — is averaging more than 100 yards on the ground over the past five games.

Arizona scored a late touchdown to pull within 24-21, but Seattle immediately responded with a 51-yard gain on a pass from Smith to Noah Fant, who caught the short throw and rumbled down the right sideline. Four plays later, Walker ran for a 5-yard score to cap the 85-yard drive.

The Cardinals lost the first of a three-game stretch against division opponents. Murray threw for 175 yards and two touchdowns, but lost a crucial fumble in the second quarter.

Collins gave the Cardinals some hope in the third quarter. Smith lofted a short pass to the right side that was intended for Walker, but Collins shed a block and jumped into the throw's path, snatching the ball out of the air and running to the end zone.

But just like all season, the Cardinals were hurt by their own mistakes. They were called for 12 penalties and were plagued by dropped passes and botched snaps.

“We are hurting ourselves,” Cardinals coach Kliff Kingsbury said. “We've got to give ourselves a chance. This self-inflicted stuff is killing us.”

Said Murray: “We are just playing bad football. It is not winning football and that is the result you are going to get when you are out there doing stuff like that.”

The Seahawks led 10-7 at halftime. They went ahead early in the second quarter when Smith found DK Metcalf for a 4-yard touchdown. The Seahawks caught a break on the previous play when cornerback Byron Murphy Jr. dropped a potential interception.

The Cardinals looked like they might score late in the first half, but Murray fumbled on a scramble when Seattle's Ryan Neal punched the ball out from behind. The Seahawks recovered.

It was Seattle's 16th forced fumble of the season, which leads the NFL.

Murray hit DeAndre Hopkins for a 22-yard touchdown midway through the first quarter for a 7-3 lead. Hopkins made it to the end zone untouched thanks to a downfield block by running back James Conner, who had missed the previous three games because of an injury to his ribs.

It was the first time this season the Cardinals scored a touchdown on their first possession and was their first TD in the first quarter.

Seahawks: WR Marquise Goodwin (groin), LB Darrell Taylor (groin) and S Joey Blount (quad) were among the inactives. ... LB Cullen Gillaspia (knee) was helped off the field in the second half and didn't return.

Seahawks: Travel to Munich, Germany, where they will play Tampa Bay next Sunday.

Cardinals: At the Los Angeles Rams next Sunday.