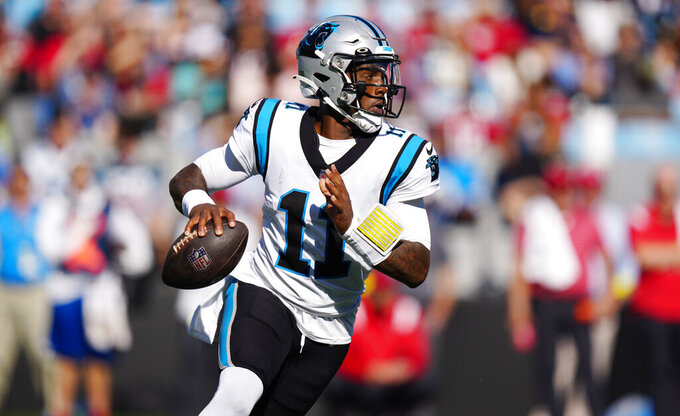 Carolina Panthers quarterback PJ Walker (11) looks to pass the ball during the second half of an NFL football game against the Tampa Bay Buccaneers Sunday, Oct. 23, 2022, in Charlotte, N.C. (AP Photo/Jacob Kupferman)

SERIES RECORD: Panthers lead 3-2-1. The Bengals are the only team that the Panthers have ever tied in franchise history.

TURNOVER DIFFERENTIAL: Panthers minus-1, Bengals even.

PANTHERS PLAYER TO WATCH: RB D’Onta Foreman has helped rejuvenate the Panthers running game, running for 118 yards in each of the past two games with three TDs last week against the Atlanta Falcons. Foreman is averaging 5.2 yards per carry and gives the Panthers the power back that interim coach Steve Wilks likes for his power running game.

BENGALS PLAYER TO WATCH: QB Joe Burrow. The third-year signal-caller had one of the best games of his career two weeks ago only to follow it up with one of the worst in Monday's loss the Browns. He started slowly against Cleveland and couldn't find any rhythm until late with poor pass protection and a lack of a running game.

KEY MATCHUP: Panthers offense vs. Bengals secondary. The Cincinnati cornerbacks group has been depleted by injuries. The team's best cornerback Chidobe Awuzie is out for the season after suffering a serious knee injury during the Browns game last week. His replacement, Tre Flowers, is banged up, and so is CB Eli Apple. The Bengals are hoping they can trust rookies Cam Taylor-Britt and Dax Hill to pick up the slack.

KEY INJURIES: Bengals WR Ja'Marr Chase is out several weeks with a hip injury. ... Cincinnati CBs Chidobe Awuzie (knee), Tre Flowers (hamstring), Mike Hilton (finger) and Eli Apple (hamstring) also are dealing with injuries. ... The Panthers hope CB Donte Jackson will be ready to play Sunday after having to leave last week’s game with what has become a persistent ankle issue. Also, RB Chuba Hubbard is expected back after missing the Atlanta game with an ankle injury.

STATS AND STUFF: The Bengals were crushed by the Browns 32-13 on Monday night as inconsistent play by the offensive line continued to plague Cincinnati. ... The Bengals will continue to play without star WR Ja'Marr Chase, who is dealing with a hip injury and will miss several more weeks. ... WR Tyler Boyd is the only Bengals offensive player on the roster who has played against the Panthers. He had six receptions for 132 yards and one touchdown in a 31-21 Bengals loss at Carolina in 2018. ... Bengals RB Joe Mixon needs 4 more yards to eclipse 5,000 for his six-year career. He would become the fifth player in team history to do that. ... The Panthers have lost 13 of their past 15 games going back to last season. ... Carolina is 0-3 on the road. ... QB P.J. Walker will be making his fourth straight start after throwing for a career-high 317 yards against Atlanta. ... Baker Mayfield will be Carolina’s No. 2 quarterback. ... WR D.J. Moore caught a 62-yard desperation pass last week to tie the game with 12 seconds left and then took his helmet off and was penalized for unsportsmanlike conduct. K Eddy Pineiro missed the ensuing 48-yard extra-point attempt and the Panthers lost a heartbreaker in overtime. ... DT Derrick Brown had a career-high 12 tackles last week. ... WR Terrace Marshall has a career-high 87 yards receiving last week.

FANTASY TIP: D.J. Moore had 152 yards on six catches against the Falcons, including a touchdown. He seems to have more chemistry with Walker than he did with Mayfield.