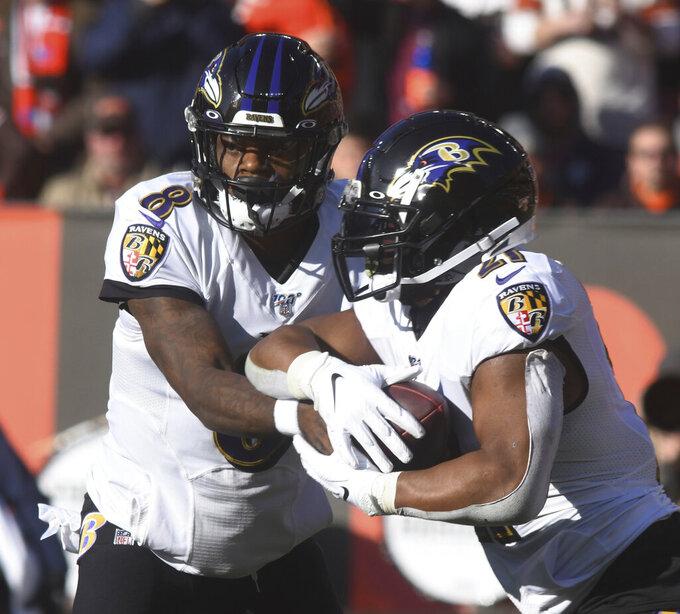 Six teams are still fighting for three important spots to ease their path to the Super Bowl.

While 10 teams have clinched playoff spots entering Week 17, only the Baltimore Ravens (13-2) have earned a first-round bye. The Ravens secured the AFC’s No. 1 seed for the first time in franchise history.

No team has reached the Super Bowl without a first-round bye since the 2012 Ravens. Eighteen of the last 25 Super Bowl champions have been either a No. 1 or No. 2 seed.

The 2010 Packers were the last wild-card team to advance to the Super Bowl.

Here’s a look inside more numbers entering the final week of the regular season:

RUNNING RAVENS: Lamar Jackson and Mark Ingram have the Ravens on the verge of breaking the league’s single-season rushing record. The Ravens have 3,073 yards rushing. The 1978 Patriots had 3,165 and 1973 Bills had 3,088.

RECORD BREAKER: Saints receiver Michael Thomas already broke Marvin Harrison’s record for receptions in a season. Harrison had 143 in 2002. Thomas has 145. Thomas has more yards receiving (5,475) in his first four seasons than anyone in league history.

PASSING SWEETNESS: Redskins running back Adrian Peterson rushes for his 111th career touchdown, moving past Walter Payton into fourth place on the all-time list. Marcus Allen is third with 123.

FASTER THAN JERRY: Falcons receiver Julio Jones reached 12,000 yards receiving in his 125th game, fastest in league history. Jerry Rice is second. He needed 142 games to do it.

CATCHING UP: Panthers running back Christian McCaffrey broke his own record for most receptions by a running back in a season. He has 109, surpassing his total of 107 last year. McCaffrey is the first running back with multiple seasons of at least 100 receptions. He has nine games with at least 150 scrimmage yards this season. Only Marshall Faulk (1999 and 2001) and Chris Johnson (2009) have done that nine times in a season.

MR. CONSISTENT: Eagles tight end Zach Ertz has 525 receptions, most by any player at his position in his first seven seasons. Jason Witten had 523.

ANOTHER FRIDGE: Miami’s Christian Wilkins joined William “The Refrigerator” Perry as the only rookie defensive linemen with TD catches in the Super Bowl era.