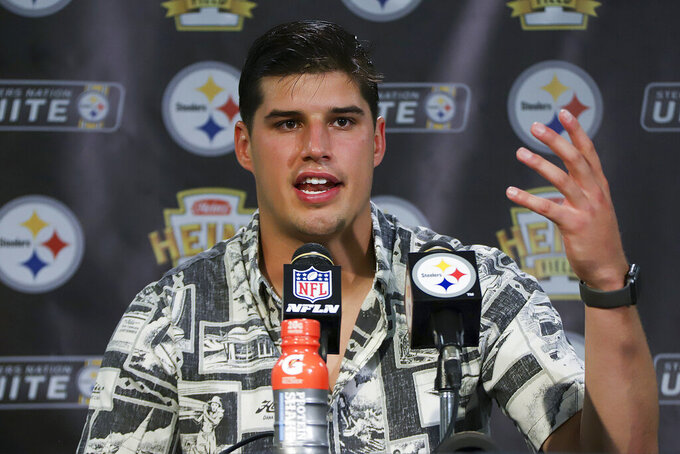 PITTSBURGH (AP) — The Pittsburgh Steelers have no plans to bail on the season with Ben Roethlisberger out until 2020 with an elbow injury.

"Our level of expectations in terms of our performance will not change," coach Mike Tomlin said Tuesday.

A day removed from announcing Roethlisberger's aching right elbow will require surgery that will sideline him for the rest of the year, the Steelers (0-2) began the process of moving on by upgrading their uneven defense and bringing in some depth behind new starting quarterback Mason Rudolph.

Pittsburgh sent three draft picks — a first-rounder and a fifth-rounder in 2020 and a sixth-rounder in 2021 — to Miami for defensive back Minkah Fitzpatrick and a 2020 fourth-round pick. The Steelers also signed former Denver backup Paxton Lynch to the practice squad behind Rudolph and second-stringer Delvin Hodges.

Fitzpatrick, the 11th overall selection in the 2018 draft, had grown frustrated with his role for the rebuilding Dolphins. Miami began shopping him after a Week 1 loss to Baltimore and found a willing partner in the Steelers, who will be without starting safety Sean Davis for at least the next two months after Davis sustained a shoulder injury against Seattle last Sunday. The team placed Davis on injured reserve, though Tomlin said there's a chance Davis could return later in the season.

Tomlin admitted the coaching staff became enamored with Fitzpatrick in the lead-up to the 2018 draft, but knew any chance at getting Fitzpatrick was a "pipe dream" with the Steelers drafting 28th. Miami took Fitzpatrick 17 spots higher, with Pittsburgh taking safety Terrell Edmunds later in the opening round. Now Edmunds and Fitzpatrick will line up alongside each other on Sunday in San Francisco.

Though Fitzpatrick played a variety of positions in Miami, including cornerback, slot cornerback and linebacker in some substitution packages, he will begin his tenure in Pittsburgh at safety.

"He's a multi-talented player, and at some point we're going to utilize those talents as an asset to us," Tomlin said "But we're going to get him started on a stable ground this week in terms of his contribution. And that means playing one position."

Fitzpatrick had two interceptions in his rookie year for Miami and collected six tackles and a forced fumble last weekend against New England. He goes from a team that might be the worst in the NFL to a club that began the season expecting to be in the playoff mix. That status is uncertain with Roethlisberger out and the offense now in the hands of the 24-year-old Rudolph.

A third-round pick in 2018 who beat out Josh Dobbs during training camp to be the primary backup behind Roethlisberger, Rudolph played well during a half of work against Seattle, completing 12 of 19 passes for 112 yards with two touchdowns and an interception that came off a tipped pass. Tomlin doesn't expect the offense to change with Rudolph taking over.

"From a team perspective, we've got a great deal of confidence in Mason (Rudolph). It's the natural process that is team sport," Tomlin said. "One man goes down; the next man steps up."

Hodges, who was with the Steelers during training camp before being cut and signed to the practice squad, will be the No. 2 behind Rudolph in San Francisco. Pittsburgh approached Lynch — who went 1-3 as a starter for Denver in 2016 and 2017 — in part because he's practice squad eligible, giving them time to evaluate him and bring him up to speed.

Tomlin declined to get into specifics of the nature of Roethlisberger's injury. Roethlisberger will have surgery in the "upcoming days" and there remains no timetable for how long the 16-year veteran will be out. Roethlisberger announced Monday night he plans to return for 2020.

"He fully intends to come back from this injury and everything we've heard, we're comfortable that that is a strong possibility," Tomlin said.