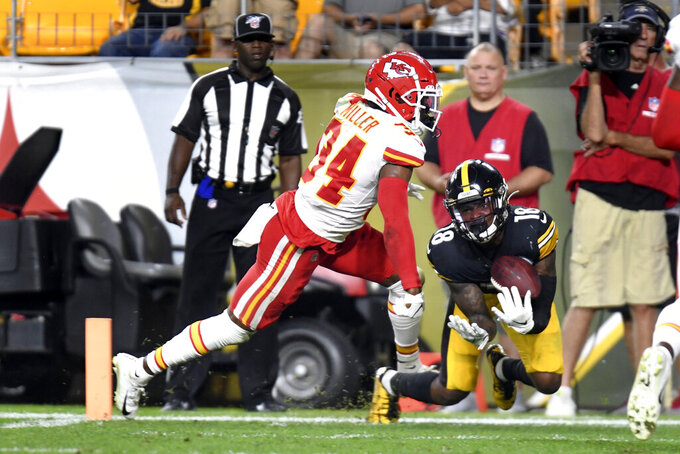 Pittsburgh Steelers wide receiver Diontae Johnson (18) looks to make a catch in front of Kansas City Chiefs cornerback Herb Miller (34) in the second half of a preseason NFL football game, Saturday, Aug. 17, 2019, in Pittsburgh. It was ruled a touchdown catch and was verified on review. (AP Photo/Barry Reeger)

"That touchdown was for Coach Drake," Johnson said. "Every touchdown I score this year is going to be for him."

Drake lobbied for the Steelers to draft Johnson in the third round this past spring. The Steelers had a need at receiver following the high-profile departure of Antonio Brown, who left the team before a key Week 17 home game and spent the offseason lashing out until the organization traded the four-time All-Pro to Oakland.

"We got close," Johnson said. "Once I met him at my pro day, we clicked and I just felt like that was my guy. He still is my guy to this day."

Johnson flashed his talent during his preseason debut last week against Kansas City, ending with three receptions for 46 yards and a touchdown. The rookie caught an earlier fourth-quarter touchdown, but the play was called back because of offensive pass interference, which was upheld following a video review.

"I was supposed to have two (touchdowns), but I can only control what I can control," Johnson said. "They were saying I pushed off at the top of the route. Clearly, I didn't, but I just play football and they make the call. It was still a great game."

"They robbed him of that first (touchdown)," Rudolph said. "That was rough. He should've had two, but it was good to see him finish on a high note with a touchdown."

Johnson redeemed himself later in the quarter when he laid out for a diving 24-yard touchdown from Devlin Hodges.

"I had to keep strong at the top of the route, come back to the ball and make the big play for my quarterback," Johnson said. "(Hodges) made a great throw. I just had to hold onto it once I hit the ground."

It was a significant touchdown for Johnson, who was appreciative of Drake's attention to detail and the brief time he had with his former coach. Johnson understands it's going to be different without Drake, but he plans to carry the memory of his former coach with him for the rest of the season and beyond.

"I felt like our relationship was steady growing each and every day," Johnson said. "He loved me and I loved Coach Drake, too. I'm just trying to move forward and know that he's always with me in my heart."

By Pat Graham 2 hrs ago
By Arnie Stapleton 6 hrs ago
By W.g. Ramirez 9 hrs ago
By Brett Martel 10 hrs ago
By Dan Greenspan 11 hrs ago