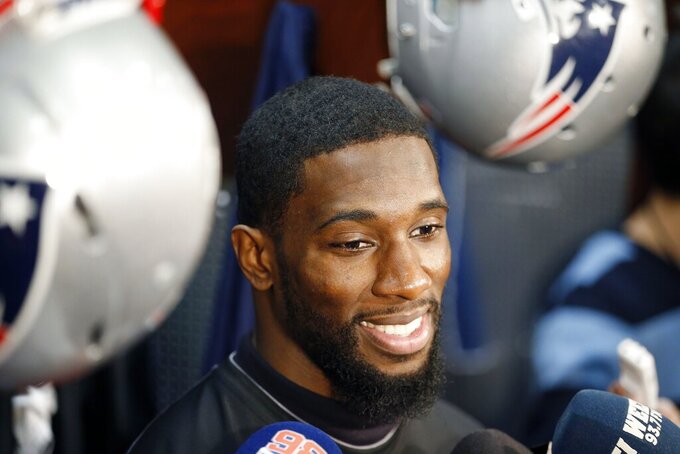 FILE - New England Patriots cornerback Kyle Arrington speaks with reporters following the NFL football team's practice in Foxborough, Mass., Dec. 26, 2013. Arrington's playing career ended after a series of concussions. The former cornerback has turned life after football into a mission to help youth in his community, especially those in underprivileged areas of Maryland and Washington, D.C. The 35-year-old Arrington launched EVOLVE Foundation a few years ago with a goal “to provide positive reinforcement to the youth by encouraging them to dream big; and assisting them with the tools, resources, and opportunities necessary to achieve their dreams.” (AP Photo/Michael Dwyer, File)

The former New England Patriots cornerback has turned life after football into a mission to help youth in his community, especially those in underprivileged areas of Maryland and Washington, D.C.

The 35-year-old Arrington launched E.V.O.L.V.E. Foundation a few years ago with a goal “to provide positive reinforcement to the youth by encouraging them to dream big; and assisting them with the tools, resources, and opportunities necessary to achieve their dreams.”

The name of Arrington’s foundation is an acronym that stands for empowering value of life via enlightenment.

“The word means everything to me, everything to my family, and that’s what it’s really all about for us is just paying it forward. Because my support system, whether it’s my parents, my family, my coaches — so many people poured so much of an investment into me, so it's only the least I can do is keep that cycle going because a lot of kids growing up don’t have that same support system in place,” Arrington said on the AP Pro Football Podcast.

Arrington began his NFL career in 2008 as a free agent with the Philadelphia Eagles after starring at Hofstra. He was released by the Eagles that September and spent the season on Tampa Bay’s practice squad. The New England Patriots gave Arrington a chance in 2009 after the Buccaneers cut him, and he made the most of it. Arrington became a starter in 2010 and tied for the NFL lead with seven interceptions in 2011 when the Patriots ended up losing to the New York Giants in the Super Bowl. He started all three playoff games in 2014 when New England beat Seattle for its fourth of six Super Bowl titles.

Arrington signed a three-year contract with the Ravens after that season but suffered a concussion in the first preseason game of 2016 and was released in 2017 after failing a physical.

“Ideally, players like to go out on our own terms but sometimes, more often than not, you’ve got to go out kicking and screaming,” Arrington said. “So in this regard, it was one too many concussions. Once the risk outweighs the reward, it’s just something you have to think about, especially as a relatively young person, father, husband. I had a decades-long career up to that point ... exceeded everything in my wildest imagination. ... But with those concussions, it was a journey and it’s still a journey each and every day still with light sensitivity. I saw a litany of doctors, professionals, neurologists, psychologists, psychiatrists, speech language therapists, you name it.

“Just putting everything into perspective, the foundation of the E.V.O.L.V.E. foundation kind of started with me. I had to find a way to personally evolve and kind of transcend what I was able to do from the football field now to our community.”

Arrington had to fight to make it in the NFL, first as a special teams player with the Patriots and then by showing coach Bill Belichick he could be a valuable starter on defense.

On his first day in New England at practice, Arrington said he intercepted a pass from Tom Brady intended for Wes Welker. That had to catch the coaching staff's attention.

“That evening I got back to my apartment and I called anybody and everybody who would pick up the phone,” Arrington said about sharing the news of picking off Brady. “I still have the ball.”

The resilience Arrington displayed during his professional football career has carried over to his personal life as he works to provide more opportunities for youngsters.

“I’ve never been more fulfilled than what I do now as far as what we’re doing in the community,” Arrington said.