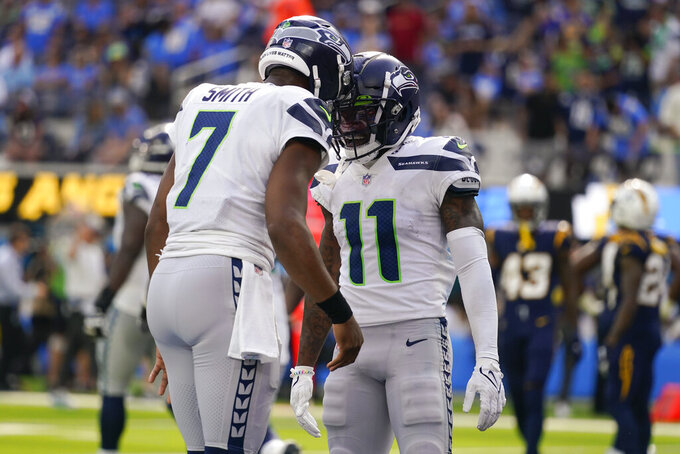 SEATTLE (AP) — Forgive Brian Daboll if he’s essentially walking around with ear plugs and blinders on, doing his best during the week to try to avoid the avalanche of attention being placed on the New York Giants.

Even if that focus is a good thing in this case.

“I can only speak of the games. The games have been great,” the Giants head coach said. “I get in my car and drive home and drive here. I don’t really do anything else.”

The Giants (6-1) are among the hottest teams in the NFL, riding a four-game winning streak into Sunday’s matchup against the equally surprising Seattle Seahawks. The Giants streak is tied for the second-longest active streak in the league, while Seattle (4-3) has won its last two to move into first place in the NFC West.

Both Seattle and New York were expected to be among the dregs of the NFC this season — the Giants because of a new coaching staff taking over a franchise that won just four games in 2021; the Seahawks because they traded a franchise quarterback with no obvious replacement at the position.

But something happened on the way to those preconceived notions.

New York has found an uncanny way to win a bunch of close games thanks to smart decisions by quarterback Daniel Jones and a dynamic season to date from running back Saquon Barkley. And Seattle discovered it already had its quarterback replacement in Geno Smith, who is among the best in the league through seven games.

The game is the only matchup this week featuring both teams having winning records. If that statement had been made before the season, some good money could have been made betting on the unlikelihood of that being the case.

“It’s been an interesting year. I think there a lot of surprises around the league as far as the play and the way the ball bounces and wins and losses,” Seattle tight end Will Dissly said. “We kind of know who we are, and we are excited.”

The Giants and Seahawks are among the two best teams in the NFL at running the ball. For New York, it has been a lot of Barkley leading the way.

He leads the NFL in yards from scrimmage and is second in yards rushing through seven weeks. But they’ve had the added element of Jones running the ball, including a career-high 107 yards last week against Jacksonville, and Seattle has struggled at times stopping running quarterbacks this season. The Giants rank second in the league in rushing.

On the other side, there’s been no falloff with rookie Kenneth Walker III stepping in after Rashaad Penny was lost for the season due to injury. Walker rushed for 167 yards and two touchdowns last week against the Chargers and is averaging more than 6 yards per carry the past two weeks.

For the second straight week, Smith will be facing one of his former teams. Smith was with the Giants for one season in 2017 and most notably was thrust into a starting role in place of Eli Manning that ended his streak of consecutive starts. Smith threw for 212 yards and a touchdown in a 24-17 loss to the Raiders in what was his only start between the end of the 2014 season and early in the 2021 season.

The Giants are expected to have significant changes on their offensive line with right tackle Evan Neal and left guard Ben Bredeson both suffering knee injuries last week against Jacksonville. Neither is expected to play against the Seahawks, especially with New York’s bye coming next week.

The Giants could end up getting a boost if Nick Gates is ready to play. Gates was added to the active roster this week after missing most of last season following a major injury fracturing both bones in his lower left leg. Gates underwent seven surgeries to repair the injury.

Gates started all 16 games in 2020 for New York and has worked primarily at guard and center.

The Giants are the first team since 2000 and the third ever to have six wins in their first seven games and have all of their games decided by eight points or less.

Minnesota in 2000 and New Orleans in 1988 are the other two. Minnesota won its division, while New Orleans ended up missing the playoffs despite finishing 10-6

It’s hard for any team to come close to matching the amount of travel the Seahawks face in a season.

But the Giants are, at least for the first half of this season. The Giants already visited London for their victory over Green Bay and now on back-to-back weeks will go from last week’s game in Jacksonville to this week in Seattle.

The Giants are expected to travel about 20,000 miles this season. But even that seems minor compared to the Seahawks, who will hit nearly 30,000 by the end of the year, including next month’s trip to Munich.