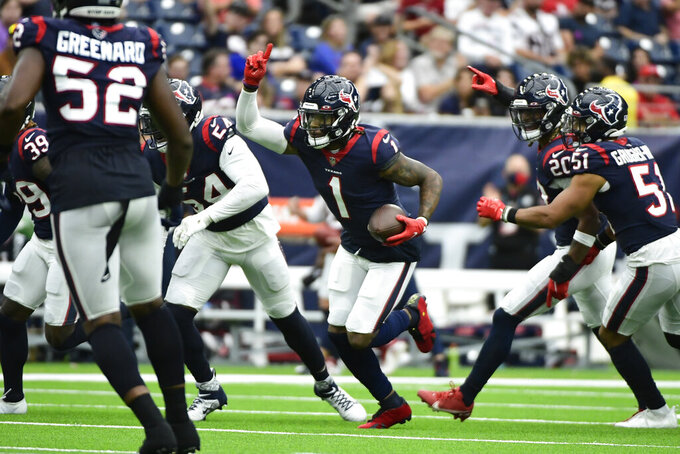 Houston Texans cornerback Lonnie Johnson Jr. (1) celebrates after intercepting a pass against the New England Patriots during the second half of an NFL football game Sunday, Oct. 10, 2021, in Houston. (AP Photo/Justin Rex)

HOUSTON (AP) — The Houston Texans looked to be on the way to their first win since the opener after building a nice lead with a solid first half Sunday against the New England Patriots.

Instead, a second half filled with mistakes, penalties and a bizarre punt for no yards led to a fourth straight loss.

Rookie Mac Jones threw a touchdown pass to tie it before Nick Folk’s 21-yard field goal with 15 seconds left lifted the Patriots to the 25-22 win.

This loss comes after an embarrassing 40-0 rout at Buffalo that was the most lopsided defeat in franchise history. But this one feels even worse than that debacle because the Texans know this was a winnable game.

“Man, this one hurts a lot,” running back David Johnson said. “We let one slide. We let one get away from us. We definitely had the win. We didn’t do enough at the end.”

“Davis protected the football,” coach David Culley said. “He was very good in the pocket and ran our offense very well. We knew going into the game, the most important thing to do was be able to protect the football and he did that.”

But he was unable to move the ball late as the Texans (1-4) lost again.

“You don’t want to lose football games ever, so it’s a harsh feeling,” Mills said. “But the guys rallied together. We (played) how we wanted to a lot during that game, and we can learn from that and find ways to win.”

Things started to fall apart soon after that.

“There was a possibility that if they gave us the right look we were going to fake it,” Culley said of the gaffe.

Mills looked good early, throwing touchdown passes of 11 and 67 yards to help Houston to a 15-9 halftime lead. His work Sunday was encouraging for a team left to start the third-round pick with Deshaun Watson out amid a trade request and legal problems and Tyrod Taylor on injured reserve.

Mills hopes that they can carry over the good things they did Sunday into next week's game.

“I think just going out there and feeling the feeling of making plays and being right there close to winning games at the end is (good)," he said. “There’s really a feeling of us learning how to win games and finish. I think we’re close. We just didn’t do enough today."