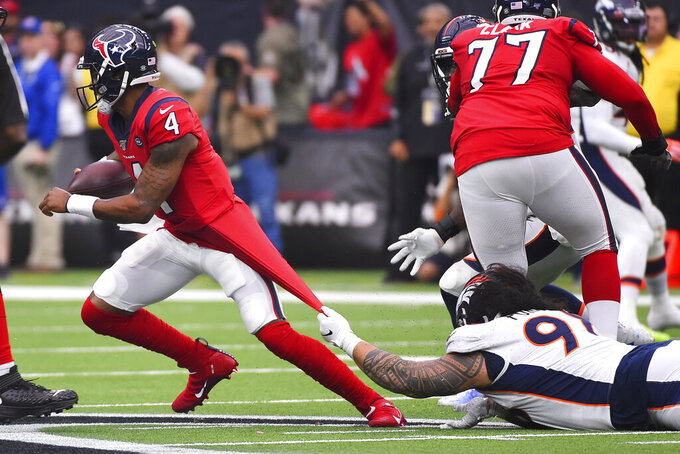 HOUSTON (AP) — After a big win over New England last week, the Houston Texans had a chance to pad their lead in the AFC South with a win over the Denver Broncos on Sunday.

Instead they came out flat in a terrible first half and the Broncos rolled to a 38-24 victory. Tennessee (8-5) then beat Oakland later Sunday to leave Houston tied with the Titans for the division lead.

"I don't think there was anything very good," coach Bill O'Brien said. "I take full responsibility for that. Just did not have this team ready to play. I thought I did, but I thought wrong."

Denver's Drew Lock threw for 309 yards and three touchdowns, Kareem Jackson had an interception and returned a fumble 70 yards for a touchdown against his former team as the Broncos built a huge lead and coasted to the victory.

Lock, who made his NFL debut in a win over the Chargers last week, threw for 235 yards with three TDs in the first half.

The Broncos (5-8) scored on their first five possessions to build a 38-3 lead early in the third quarter.

"If you get down 14-0 and then you can't stop them, you can't get things going on offense, you're driving the ball but it bogs down and you can't score, you're going to be in for a long day," O'Brien said. "And that's what happened. I thought our guys came out in the second half and tried to fight, but we gave up too many points in the first half.

"We turned the ball over," Watson said. "We didn't capitalize on fourth down. That was pretty much it. We were moving the ball .. it wasn't anything we didn't do. We just didn't execute."

The Texans (8-5) looked great last week as they jumped out to a big lead early and held on for a 28-22 victory over the Patriots for their first win in the series since 2010.

This week they struggled to do anything right before halftime.

The Broncos took an early lead when Lock threw a 14-yard touchdown pass to Noah Fant with about 7 1/2 minutes left in the first quarter.

Keke Coutee, inactive for the past two games despite being healthy, grabbed an 8-yard reception on Houston's next drive but fumbled. Jeremiah Attaochu picked up the ball and handed it off to Jackson, who dashed 70 yards for the score against the team where he spent the past nine seasons.

The Texans still have both meetings against the Titans remaining starting with a trip to Nashville next week.

"It's a little bit deflating," safety Justin Reid said. "The best thing we can do is flip the page and learn from it. We've got the Titans next week, basically for the division. That's the best thing that we can look forward to."

Left tackle Laremy Tunsil, whom the Texans traded for in August to upgrade their porous line, had three false starts on Sunday to give him an NFL-leading 12 this season.

He said he's got to fix the problem and that he talked to an official about why he kept getting whistled for it on Sunday.

The Texans went for it on fourth-and-1 from their 34 with two minutes left in the first half and Watson's pass was tipped at the line and fell incomplete to give the Broncos a short field. They took at advantage when Royce Freeman caught a 3-yard touchdown pass to make it 31-3 at halftime. Houston's Lonnie Johnson had two defensive holding penalties on that drive.

Veteran cornerback Johnathan Joseph wasn't sure why the Texans played so poorly on Sunday, but knows they have to move on quickly if they hope to win the division.

"We didn't expect to get beat that way," he said. "Whatever it is, we've got to correct it quickly. We definitely have to watch this and get better from it."