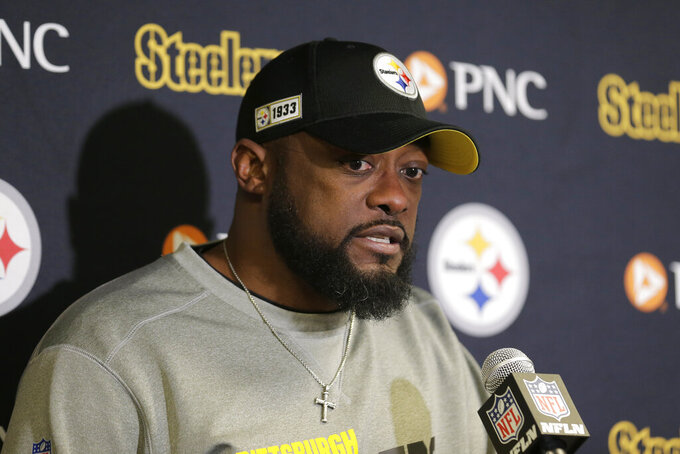 PITTSBURGH (AP) — Mike Tomlin doesn't need to let the post-NFL draft grades come in. The Pittsburgh Steelers coach is certain his team hit a home run in 2020 regardless of what happens over the next three day.

It helps when your first-round pick already has All-Pro on his resume.

While teams scrambled to figure out the first “virtual” NFL draft, the Steelers spent Thursday night monitoring it from afar. No need to get worked up over logistics — at least not yet — with safety Minkah Fitzpatrick already in the fold.

Pittsburgh sent its first-round pick to Miam i last fall in exchange for the dynamic Fitzpatrick, whose arrival was the missing piece the the club's defense needed to become one of the league's best. If it renders the team a spectator during the first round for the first time since 1967, so be it.

“To be honest with you, I’m not fretting at all about not having a first pick,” Tomlin said. “That first pick is Minkah Fitzpatrick, and we have already benefited from his presence and looking forward to continuing to do so."

Fitzpatrick picked off five passes, scored a pair of touchdowns and finished with 57 tackles as the quarterback in the secondary. His arrival helped keep Pittsburgh in contention for a playoff spot into the final weeks of the season even with Ben Roethlisberger sidelined for almost the entire year due to a right elbow injury. Hard to imagine the 18th overall pick on Thursday — the one the Steelers would have had if it hadn't acquired Fitzpatrick — making a bigger impact.

General manager Kevin Colbert admitted the team doesn't have enough capital to trade up into the first round, meaning Pittsburgh likely won't be on the clock until the middle of the second round on Friday with the 49th overall selection.

Pittsburgh conducted 125 interviews between the Senior Bowl, the NFL combine and Zoom meetings over the last three months. Though there are some question marks — Colbert said there were 76 players with incomplete physicals because they were unable to get re-evaluated because of the pandemic shutdown — the team believes it as prepared as possible.

“We have absolutely no complaints,” Colbert said. “It’s been different. We had three solid weeks of meetings with the coaches and the scouts. We put our board together. We’re not sitting in a room, but we all can see a board and it’s been great.”

The Steelers find themselves in an interesting position. They managed to go 8-8 despite jockeying between three different quarterbacks. The defense looks set for next year after the team opted to place the franchise tag on outside linebacker Bud Dupree.

There are holes and question marks on offense, particularly at running back and wide receiver.

There's also one at quarterback, at least in theory. Neither Mason Rudolph nor Devlin Hodges made an emphatic claim to become the 38-year-old Roethlisberger's eventual successor. Colbert stressed the Steelers are confident in Roethlisberger returning to form this fall but believes there is solid depth at the position.

“There are several players in that group that are going to be future starters, possible Pro Bowlers,” Colbert said. “There are some nice backups. If any pick makes sense at any time of course we’ll make those picks.”