Trump chops with Braves fans before Game 4 of World Series 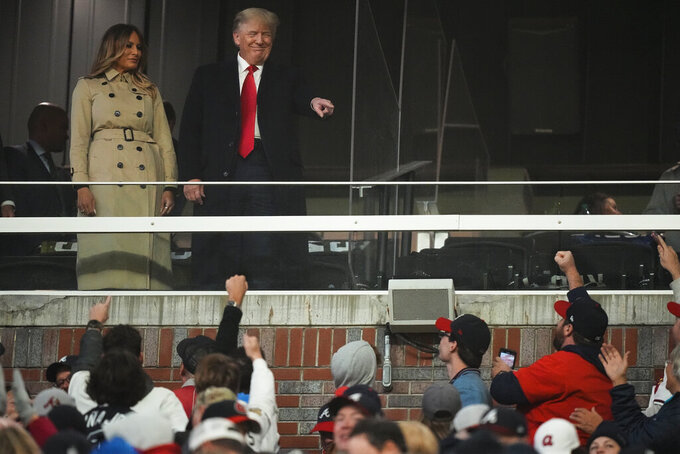 ATLANTA (AP) — Only months after calling for a boycott of Major League Baseball, former President Donald Trump did the tomahawk chop with Atlanta Braves fans at Game 4 of the World Series on Saturday night.

Trump stood beside his wife, Melania, as he chopped away with fans before the game between the Atlanta Braves and Houston Astros from a private suite.

Trump was expected to be joined by political allies, including U.S. Senate candidate Herschel Walker.

Trump released a statement in a mass email to his supporters Saturday about his planned World Series appearance:

“Looking forward to being at the World Series in Atlanta tonight. Thank you to the Commissioner of Baseball Rob Manfred, and Randy Levine of the New York Yankees, for the invite. Melania and I are looking forward to a wonderful evening watching two great teams!”

MLB denied making the invitation and said in a statement, “He requested to attend the game.”

Levine is the Yankees president.

The visit to Truist Park provided Trump an opportunity to be seen with Walker, the former University of Georgia Heisman Trophy winner and running back with the Dallas Cowboys, Minnesota Vikings and USFL New Jersey Generals.

Trump was an owner of the Generals when Walker played for the team in the now-defunct league, and they have maintained a relationship. Trump has encouraged Walker to run for Senate.

Senate Minority Leader Mitch McConnell endorsed Walker on Wednesday. Walker, who is seeking to unseat Democratic Sen. Raphael Warnock, said on his Twitter account he was “having a blast” at the game with Trump.

Trump encouraged a boycott of MLB games after Manfred removed the All-Star Game from Atlanta. The game instead was held in Denver.

President Joe Biden supported moving the game, though some Braves fans and businesses near Truist Park complained they were being unfairly punished.

Trump may have selected Atlanta in hopes of a more positive reception than he received in his last World Series appearance. When still in office, he was booed when he sat in the stands at Game 5 of the 2019 World Series between the Astros and Washington at Nationals Park.

Trump was not shown on the Truist Park video board during the game.