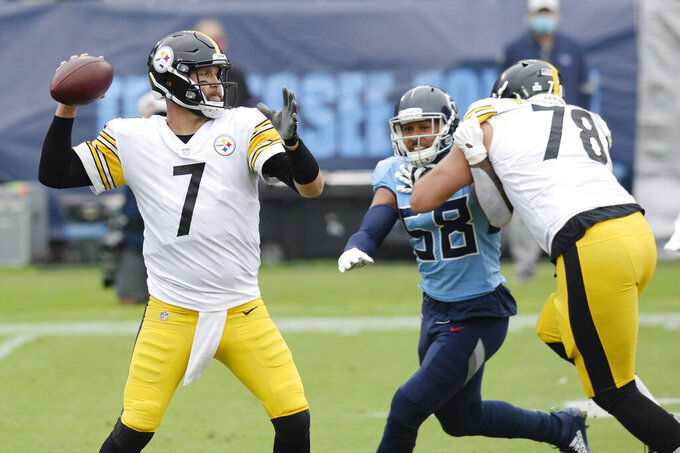 The fierce NFL rivalry between the Steelers and Ravens lost some of its luster last year when Pittsburgh stumbled to the finish without injured quarterback Ben Roethlisberger.

Baltimore swept the Steelers, capping a 14-2 regular season by playing its backups in a 28-10 rout. The Ravens had already clinched the top seed in the AFC, and Pittsburgh had only a faint hope of reaching the postseason with a victory.

Flash forward to Sunday, when Roethlisberger and the Steelers (6-0) face the surging Ravens (5-1) in a showdown for first place in the AFC North.

”You should anticipate it being a physical and rough and tumble game because history tells us that," Steelers coach Mike Tomlin said. “I think how the two teams are playing this year also gives you that indication."

Pittsburgh has the league's top-ranked defense and is the lone remaining undefeated team in the NFL with help from Roethlisberger, who's as sharp as ever in his return from an elbow injury. The Ravens have won three in a row and own the top rushing attack in the league.

The stakes are high in the renewal of arguably the best rivalry in the NFL. Baltimore linebacker Pernell McPhee was a participant in the age-old clash between the Packers and Bears, which he insists is a distant second.

“What makes it better than the Bears and Green Bay is that they’re not physical. That conference isn’t physical like the AFC North," McPhee said. “They haven’t had the history with defensive players like the AFC North. It’s just two great organizations going against each other. It’s going to be a fistfight from play one to the last play.”

The Steelers have at least one sack in 63 straight games, the third-longest stretch in NFL history. The run began in Baltimore on Nov. 6, 2016, and includes a five-sack performance last season when Ravens quarterback Lamar Jackson made his first start against the Steelers.

“It can’t just be one guy, one cowboy just trying to do his own show,” Pittsburgh defensive lineman Cam Heyward said. “It requires a lot of guys not only sacrificing to do what’s good for the team but also just understanding that we have to have our rush lanes and we have to have the ability to cover up those big lanes, because you’re going to get torched if you don’t.”

Baltimore, meanwhile, has forced a turnover in 19 successive games, the longest active streak in the league.

Roethlisberger isn't showing his age (38) or any lingering effects from the injury that ended his 2019 season after two games. He has completed 68% of his passes with 13 TDs and only four interceptions.

Roethlisberger is getting more playmakers involved, most of them on short, quick passes designed to move the chains and control the clock at the same time. Six players have been targeted at least 20 times through six games, and four players have led the team in receiving yards in a given game. It’s a trend Tomlin admits is by design.

“No question, we go into the game with an understanding of who may have an opportunity to have a big day from a matchup or schematic standpoint,” he said.

The Ravens' offense and reigning MVP Jackson have not reached the level of effectiveness they showed last year, when they led the league in scoring. The running game is sound, but Baltimore ranks 31st in passing.

“It's not as bad as everyone thinks it is. It’s not as great as it was maybe last year, but we’re right there," tight end Mark Andrews said. “This last half of the season is going to be really big for us, and I’m confident in our ability to throw the ball, as well as run the ball.”

WELCOME BACK, SORT OF

The Ravens will have more than just a handful of fans at a home game for the first time this season. A few thousand tickets have been distributed, and the team hopes they'll all make plenty of noise.

“I don’t really know what impact the noise will have on it, but it will be nice to have people there," coach John Harbaugh said. “It’s just a much better environment. I hope it builds and grows. I hope more fans are allowed to come in as the season goes along. That would be my hope, based on whatever needs go into making those decisions."

No fans were permitted at the opener, and around 250 immediate family members were allowed at the past two home games.