Under Dan Snyder, Washington sank from NFL elite to also-ran 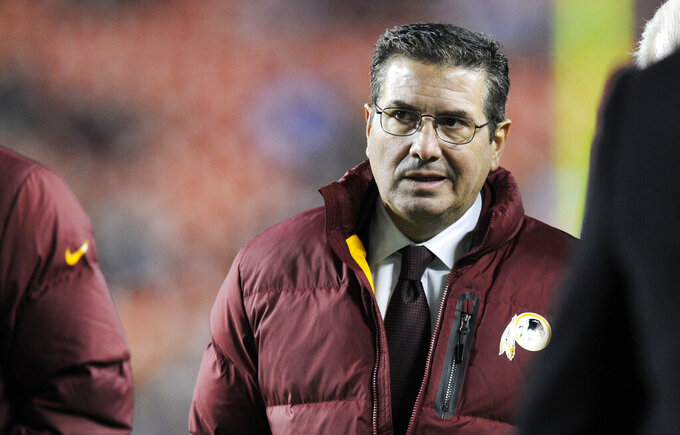 FILE - In this Dec. 1, 2013, file photo, Washington Redskins owner Dan Snyder walks off the field before an NFL football game against the New York Giants in Landover, Md. Few NFL teams have managed to lose as much as Washington has since Daniel Snyder was part of a group that purchased the franchise for a then-record $800 million in 1999. (AP Photo/Nick Wass, File) 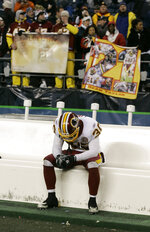 LANDOVER, Md. (AP) — Super Bowl-winning defensive end Fred Stokes remembers what he heard from other players in 1989 when he left the Los Angeles Rams as a free agent to join the NFL team based in the nation’s capital.

“When I got here,” Stokes said, “the guys all told me, ‘We’re all about winning.’ Washington and winning went together.”

This was back when D.C.’s football franchise was in the midst of making the postseason eight times in 11 years, a run of success that featured four Super Bowl appearances and three championships. Back when sellouts and bouncing stands at old home RFK Stadium were a given. When offensive innovator Joe Gibbs called the shots as a head coach destined for induction at the Pro Football Hall of Fame. And, of most significance considering the current climate, when Jack Kent Cooke was the owner of a club that would be sold by his estate to Daniel Snyder a decade later, a transaction that led to a whole lot of losing — only four teams have a lower winning percentage since 1999; only two have fewer playoff wins — and whirl of misconduct that has not abated.

So what does Stokes see nowadays when he looks at what has become of what are now known as the Commanders, following the discarding of an offensive name amid a national reckoning about racism in 2020 — although Snyder’s wife, Tanya, and the team president, Jason Wright, seemed to forget about that change on Sunday, when both gave shoutouts to the old moniker at a “homecoming” rally outside the stadium featuring dozens of former players?

Wearing on his right hand the gold ring earned via a Super Bowl victory under Gibbs in January 1992, following a season in which Stokes was second on Washington with 6 1/2 sacks, he continued: “What’s that expression? ‘It takes a village to raise a child.’ Well, it takes an organization to win a Super Bowl, not just coaches and players."

Under Snyder, the approach has varied over the years.

Resurrecting the careers of past winners such as Gibbs and Mike Shanahan, who never came close to equaling their earlier coaching resumes. Hiring someone few others considered head coaching material in Jim Zorn, then adding an out-of-football play caller whose most recent job had been as a bingo caller (Sherman Lewis). Bringing aboard right-hand men who never panned out, such as Vinny Cerrato and Bruce Allen. Free agency has been all over the place, from wild overspending to against-the-rules accounting to the underspending of last offseason. Drafting often has been a disaster.

All of that is to say nothing of the general dysfunction and, worse, the allegations of sexual harassment and financial impropriety that led to multiple ongoing investigations of Snyder — by the league, by Congress, by D.C.’s attorney general — and prompted Indianapolis Colts owner Jim Irsay to say a week ago that there is “merit to remove” Snyder. He already was fined $10 million and told to cede day-to-day operations of the club to Tanya for several months by the NFL last year after a previous inquiry into widespread sexual harassment and mistreatment of women at the team.

Attendance is at the bottom of the league, but some of the spectators on hand Sunday let their feelings be known — during a victory, no less, by a score of 23-21 against four-time NFL MVP Aaron Rodgers and the Green Bay Packers that improved last-place Washington's record to 3-4 this season — by booing and then chanting “Sell the team!” after Tanya Snyder was part of a video about breast cancer awareness that played on the videoboard.

Hardly the first time that cry has been heard at the dilapidated arena in Landover, Maryland. As it is, the stands were loaded with Green Bay supporters; for every No. 17 Doug Williams or No. 21 Sean Taylor or No. 28 Darrell Green or No. 89 Santana Moss burgundy-and-gold jersey, there was a No. 12 Aaron Rodgers or No. 4 Brett Favre or No. 52 Clay Matthews or No. 87 Jordy Nelson green-and-yellow shirt.

“I just hate seeing a lot of Packers fans here today,” said Raleigh McKenzie, the starting left guard for Washington’s champs in two Super Bowls (and, as it happens, a player for Green Bay in the final two years of a career that lasted from 1985 to 2000).

Few NFL organizations have managed to lose the way Washington has since Snyder was part of a group that purchased the team for a then-record $800 million in 1999, when he vowed: “Our commitment is to bring winning football back to Washington.”

In the 23 seasons completed since that transaction, the club has won a grand total of two playoff games.

Only two of the NFL’s 32 clubs own a smaller collection of postseason victories in that span: The Detroit Lions have zero; the Cleveland Browns have one.

“It does get frustrating. I hear fans say, ’Oh, I remember when ... ,” said Virgil Seay, a wideout for Washington in the early 1980s. “They want to be with you through thick and thin, but they need something to cheer about.”

There is no question that since Snyder took charge, Washington has been among the league’s least-competitive outfits, the dregs of the dregs, a far cry from what once was.

Its 18 playoff wins from the AFL-NFL merger in 1970 through the 1998 season were outdone by only three teams: Dallas (31), San Francisco (24) and Pittsburgh (21). Those are also the only franchises that accumulated more Super Bowl triumphs than Washington’s three during that stretch — which came after two NFL championships in 1937 and 1942. Perhaps it was just a slip of the tongue, but also happened to be accurate, when Tanya Snyder made mention of the 90-year-old franchise’s “seven decades of fantastic football” while addressing the folks gathered in Legends Plaza before Sunday’s game.

“We kind of spoiled the fans here,” McKenzie said. “I’m sure they think, ‘Hey, that was special.’ I just hope we get it back.”