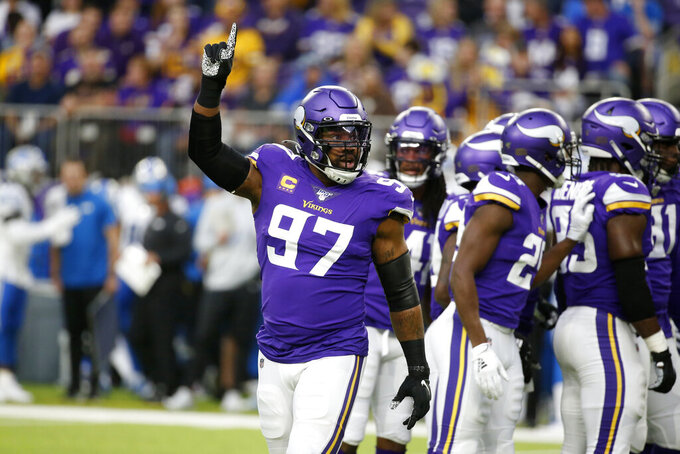 MINNEAPOLIS (AP) — Everson Griffen was only gone for one season. His return to the Minnesota Vikings this year hardly happened fast enough for his liking.

Griffen signed with the Vikings and joined them for practice on Monday, yet another reunion with an established veteran in the team's attempt to revive the defense from a dismal 2020 season. The 33-year-old was at the team facility for a tryout last week.

“I left because I thought the grass was greener on the other side, to be honest, and it wasn’t. Going to Dallas, going to Detroit, the grass wasn’t greener. I didn’t get the love that I got here with the fans, with the coaches, with the players,” said Griffen, who had six sacks last season over his stints with the Cowboys and Lions.

The four-time Pro Bowl pick, who has 80 1/2 sacks in 11 years in the NFL, lamented how hard moving three times during the pandemic-dominated season was on his wife and three children. They kept their home in the Twin Cities the whole time.

“I felt like this was the best fit for me throughout the whole league,” Griffen said.

Once he became a free agent again, he lobbied hard to return to Minnesota and in the process one day on Twitter vented about quarterback Kirk Cousins and how much space his contract takes up under the salary cap.

Without Cousins, the Vikings might've had the room to give Griffen a contract with terms desirable enough last spring to keep him from deciding to leave in the first place. Griffen said on Monday he planned to apologize to Cousins with a “man-to-man conversation” for those disparaging, since-deleted tweets.

With the gaping hole caused by the season-long absence of star Danielle Hunter with a neck injury, his departure was clearly felt last year by a Vikings team that slipped badly to 27th in the league in yards allowed and 29th in points against.

“I’ve still got the burst, still got the speed, just have to go out there and get the reps back,” said Griffen, who's hoping to get his No. 97 back from new nose tackle Michael Pierce.

Vikings coach Mike Zimmer said Griffen will be a situational pass rusher and not a starter, as Stephen Weatherly and D.J. Wonnum remain in audition at right end opposite Hunter. Griffen, a fourth-round pick by the Vikings in 2010, amassed 43 1/2 sacks in 62 games over his first four seasons as a starter from 2014-17.

“We talked to him for quite a while the other day, and it seems like he’s in a good place,” Zimmer said. “Hopefully he can continue to do that, and if he does he can help us.”

Griffen, Weatherly, cornerback Mackensie Alexander and defensive tackle Sheldon Richardson have all re-signed with the Vikings this year after a brief time with other teams. Richardson was gone for two seasons, the others for just one.

Griffen came to the NFL as a work in progress out of USC and got into some off-the-field trouble after his rookie year. He grew up quickly when his mother died unexpectedly on a visit in 2012. Griffen made a strong enough impression on Zimmer once he took over in 2014 that he was selected as a full-season captain for 2015.

There came a major setback in 2018, when Griffen was taken by ambulance to a hospital after a scary series of incidents around the Twin Cities during which he threatened violence in a hotel lobby and made repeated comments about people trying to kill him. After time away for mental health treatment kept him out of four games, Griffen returned to the field.

Still gregarious and an energy source for the team, but sporting a bit less of the goofball style he did in his earlier days, Griffen is 15th in career sacks among the league's active players, according to Pro Football Reference.

“I think the way we rush would be more beneficial to him than the way he tried to do it last year,” Zimmer said. "I think he probably recognizes that as well.”

The Vikings also signed former Atlanta running back Ito Smith among several other moves to reduce their active roster to 80 players ahead of the next deadline.

Linebacker Cameron Smith was put on the reserve/retired list after ending his comeback from open heart surgery. Defensive tackle Jordon Scott, who had an interception in the preseason game on Saturday, was waived with an injury designation. Rookie defensive end Janarius Robinson, one of the team's fourth-round draft picks, was placed on injured reserve. An unlimited amount of players can now return from injured reserve after missing a minimum of three games.

There was another notable development in camp on Monday with a visit from Dr. Michael Osterholm, director of the University of Minnesota's Center for Infectious Disease Research and Policy. One of the most-consulted epidemiologists in the country made the latest presentation to the team that, as of three weeks ago, had the NFL's lowest rate of players vaccinated for COVID-19.