Vikings need Smith to keep up strong return from COVID-19 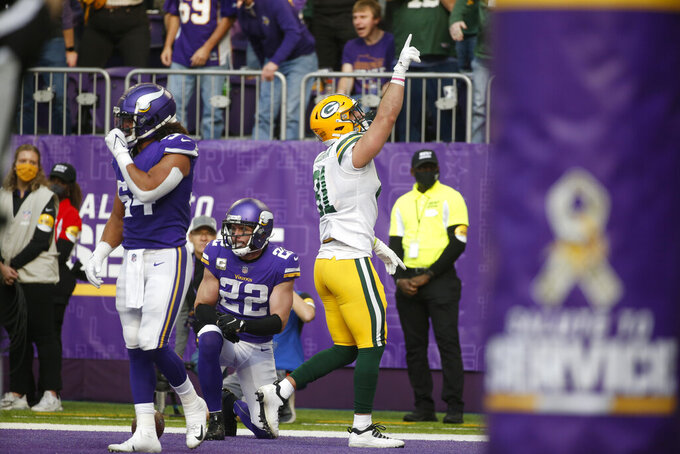 MINNEAPOLIS (AP) — Harrison Smith has made a noticeable impact in his return to the Minnesota secondary following a sudden, COVID-19-forced absence.

With the depleted state of their defense, the Vikings could use several more similar performances from the five-time Pro Bowl safety who received a $64 million contract extension before the season.

Smith had a sack and two hits on Green Bay quarterback Aaron Rodgers in a 34-31 victory on Nov. 21. And last week in the 34-26 loss at San Francisco, Smith notched an interception, two passes defensed and 11 tackles — all season highs. This came after the 32-year-old missed two games with COVID-19, for which he tested positive on the morning of the game at Baltimore on Nov. 7.

“It came out of nowhere. I never really felt much," said Smith, who is one of several high-profile players on the team who remain unvaccinated. “It's weird when you feel healthy and you don’t play, but I get it. That’s how the virus works.”

The Vikings have had their share of illness-related setbacks this year, with cornerback Patrick Peterson the latest standout to land on the COVID-19 reserve list this week.

“It’s just how it is. Just try to wear the masks and do things how we’re asked to do them,” said Smith said, who added that he still does not plan to get vaccinated.

Forced into quarantine in Baltimore, Smith flew back to Minnesota on a private plane dispatched by Vikings owners Zygi and Mark Wilf.

What helped soften the blow for Smith was how rookie Camryn Bynum played in his place, particularly since Bynum was tapped for duty just hours before — and without the usual turns with the first-team defense in practice.

“He didn't look like he needed them. He played great,” Smith said.

The Vikings (5-6) lost to the 49ers without their preferred starter at all four defensive line positions. Linebacker Anthony Barr went down in that game with a hamstring injury, too. The depth chart appears precarious, but Smith said he feels more confidence in the current defense than the group that collapsed down the stretch last year. All six of Minnesota's losses have come by one score.

“We know we can play with anybody," Smith said. "We’ve shown that.”

Peterson is vaccinated and thus has the potential for an accelerated return, but that's up to the virus at this point. Defensive tackle Dalvin Tomlinson, who missed the last game at San Francisco on the COVID-19 reserve list, was on track for a return to practice Thursday, co-defensive coordinator Andre Patterson said.

Nose tackle Michael Pierce (elbow) was also designated for return from injured reserve, meaning he could play at Detroit and kindle some optimism that the beleaguered defense will improve against the run.

“You know how excited I was about Mike after the first couple of games with him showing his pass rush ability as well as his strength in the run game, so if we get those two guys back, it will be great,” Patterson said.