Vikings seeing the benefit of leadership change in 6-1 start 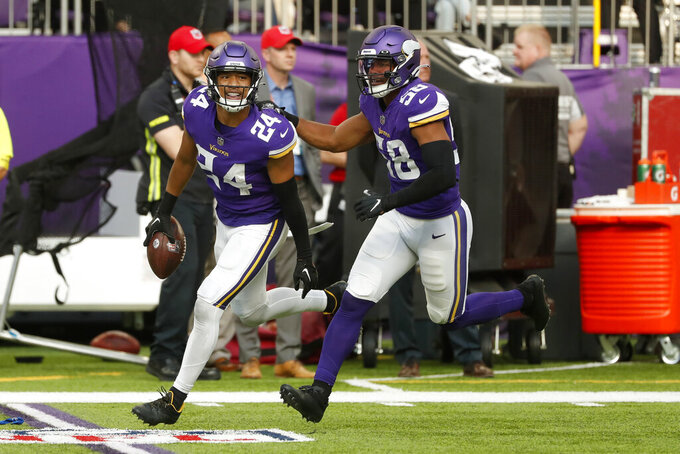 Minnesota Vikings safety Camryn Bynum (24) celebrates with teammate linebacker Jordan Hicks (58) after intercepting a pass during the second half of an NFL football game against the Arizona Cardinals, Sunday, Oct. 30, 2022, in Minneapolis. (AP Photo/Bruce Kluckhohn)

MINNEAPOLIS (AP) — Patrick Peterson and Jordan Hicks, two defensive starters for the Minnesota Vikings, didn’t hold back with teammates or reporters regarding the unceremonious endings to their tenures with the Arizona Cardinals.

The Vikings beat the Cardinals 34-26 on Sunday.

Peterson and Hicks appreciate being with the Vikings. But it’s not just scorned former teammates seeing a difference in Minnesota this season.

“The feeling of going to work, being in this locker room, being around these guys, everything about this group feels like family,” running back Dalvin Cook said after Sunday’s win.

“Kevin knew what that was on Day 1 when he walked into the building. He knew how we wanted to play, what type of team we wanted to be outside of this stadium, and just having fun. Building that culture around here has been fun.”

A change was needed. Players were vocal about the atmosphere under coach Mike Zimmer and general manager Rick Spielman, who were both fired after last season’s 8-9 record.

O’Connell and Adofo-Mensah have the Vikings off to a 6-1 record with five straight victories.

Only the Philadelphia Eagles (7-0) have a better record in the NFC. Minnesota has three more wins than the next closest competitor in its division and has beaten each division opponent already this season.

“I feel like it’s the chemistry,” linebacker Za’Darius Smith said. “Just off the field, when we get a chance to be with each other off the field, it can be the little things; playing a game with each other. If we continue to do that and learn each other’s weaknesses and what we’re good at, and have the coach see it, and give us opportunities to go beat our one-on-ones, we can be a great football team. You can see, 6-1, it’s a great football team.”

Perhaps a sign of the change can be seen in the Vikings ability to close out tight games.

“We do not fold, as corny as it sounds, it is about the culture and our locker room,” said second-year safety Camryn Bynum, who had an interception in the comeback.

“Everyone plays hard and everyone is playing for each other. Knowing that the guy next to me has my back, and I got his, is really how we play football.”

O’Connell recalled his first meeting with the team in the spring and how he focused on the culture he wanted to build before ever discussing football philosophy. He reminded his team Saturday night before the victory over Arizona of the core principles he preached early on.

“I feel like they’ve not only taken the ownership of that, but they’ve also taken it to a place that I didn’t know was really possible as far as eight weeks into the season,” O’Connell said.

“We’ve been able to do that and the results have only helped that. But our process to get there is what matters the most to me.”

Minnesota scored touchdowns on all five trips within the 20-yard line on Sunday and is now fifth in the league in red zone percentage, scoring touchdowns on 66.67% of their opportunities this season.

According to Sportradar, which tracks the stat back to the 2000 season, it’s the second-best rate the Vikings have had in the red zone, behind only a 71.2% conversion rate in 2020.

He’s missed his past five field-goal attempts at home, including having one blocked.

Cook had his first 100-yard rushing game of the season on Sunday with 111 yards on 20 carries. He added a season-high five catches and 30 yards receiving.

Cook scored a third-quarter touchdown as Minnesota ran for three scores in the game. The Vikings ran for a season-high 173 yards, averaging 6.0 yards per carry.

The Vikings offensive line has been much improved this season, but rookie right guard Ed Ingram had a tough time Sunday. Ingram was routinely pushed back and allowed several pressures, many from Arizona defensive end J.J. Watt.

Defensive tackle Dalvin Tomlinson left Sunday’s game with a right calf injury and tight end Irv Smith Jr. has an ankle injury. O’Connell didn’t have an update on either injury, but said both are considered “week to week.”

Smith, who had three sacks Sunday and is now tied for the league lead with 8 1/2 this season entering Monday, is playing through a left knee contusion. He limped off the field twice Sunday but later returned. Receiver Adam Thielen is also dealing with a knee contusion.

6 — That’s a plus-6. The Vikings are tied for second in the NFL entering Monday with a plus-6 turnover ratio.

Reunions abound as Minnesota heads to Washington. It will be a return to where quarterback Kirk Cousins first played for O’Connell, who was the quarterbacks coach for Cousins' final two seasons in Washington. Also, the Commanders are starting quarterback Taylor Heinicke, who was with the Vikings from 2015-17.