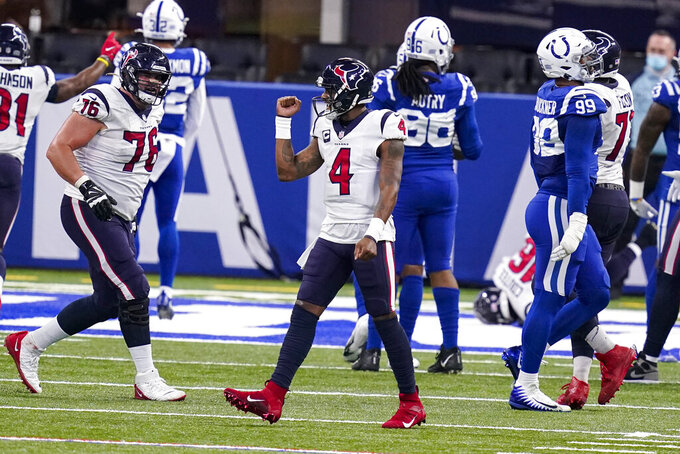 Houston Texans quarterback Deshaun Watson (4) celebrates after a throw for a touchdown against the Indianapolis Colts in the second half of an NFL football game in Indianapolis, Sunday, Dec. 20, 2020. (AP Photo/Darron Cummings)

INDIANAPOLIS (AP) — Deshaun Watson choked back tears two weeks ago, blaming himself for a late turnover that sealed Houston’s fate in a loss to Indianapolis.

On Sunday, after watching virtually the same ending, Watson trotted out a new approach.

This time, the Texans’ franchise quarterback offered support to receiver Keke Coutee, whose late fumble near the goal line cost Houston another ballgame. And this time, he asked his Houston teammates to help him get it right in this final two-week fight.

Houston (4-10) needs Watson to keep things on track. Since he signed a four-year, $177 million contract in September, little has gone right for the Texans.

They lost their first four games and endured the midseason firing of coach Bill O’Brien. They’ve watched former star receiver DeAndre Hopkins thrive in Arizona. They’ve seen the constant battering of Watson continue with five more sacks Sunday and 16 over the past three weeks. And they don’t even have a first- or second-round pick next spring to help bail them out of this frustrating cycle.

But the most discouraging chapters have come in the past three weeks — all losses.

After Watson marched Houston to the Indy 1-yard line with 1:28 to go, the shotgun snap went low and outside. When he couldn’t corral it, defensive tackle Grover Stewart knocked it away and linebacker Anthony Walker recovered it.

Houston didn’t rebound the next week, either. Instead, Chicago snapped a six-game losing streak by handing a humiliating 36-7 victory to the Texans.

Then, in Sunday’s rematch with the Colts (10-4), it happened again.

On third-and-11, Watson fired a 14-yard dart to Coutee who turned and started toward the end zone. But as Coutee reached the 2-yard line so did Pro Bowl linebacker Darius Leonard. With one punch Leonard jarred the ball loose and sent it bouncing into the end zone, where Bobby Okereke recovered it with 19 seconds left.

“It’s honestly unbelievable,” David Johnson said after catching 11 passes for 106 yards. “We have so much momentum ... and it’s just tough the way the outcomes are. This (Indy) is a playoff team and we played them down to the wire both times and we had a chance. It just wasn’t our day either time.”

But that makes it no less disheartening to players or fans, who weighed in quickly on the turnover.

Coutee, who has had all three of his 100-yard games against Indianapolis and caught five passes for 53 yards including the tying score Sunday, responded to them with a short, succinct Instagram post.

“Most if not all of you have never put on a helmet in your life, so y’all can chill with the crazy messages,” he wrote. “Much appreciated!”

The bigger question is what can the Texans do to get out of this funk?

They close the season with home games against struggling Cincinnati, then Tennessee, which shares the AFC South lead with the Colts. Because of the division chase and the tiebreakers, the Titans may need to win that game to clinch a home playoff contest.

Houston, meanwhile, wants to do more than just close out a bad season. Watson would like to start building for a more promising future.

“Keep working, keep fighting have some pride,” Watson said. “Have respect for the game and this organization and your families and their name on the back jerseys, and go out there and play. This year we’re eliminated and, we haven’t been winning, but at the same time, this is a profession. This is your job. So what you put film on each and every Sunday, that’s going to dictate your future.”