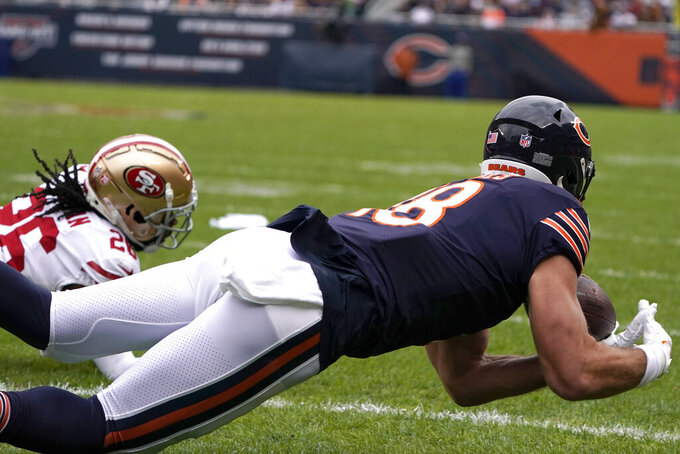 It was an unusual spot, one he hopes he's never in again.

It was also an all-too-familiar result.

The Bears are reeling with three straight losses after falling 33-22 to San Francisco in a game during which they were without their coach as well as their top pass rusher.

Nagy, who is vaccinated, was away from the team all week after testing positive for COVID-19. Special teams coordinator Chris Tabor filled in for him.

But besides missing their coach, the Bears had to get by without Khalil Mack. The three-time All-Pro linebacker was sidelined for the first time since 2018 because of a foot injury. And on top of that, safety Eddie Jackson exited after hurting his hamstring on the second play from scrimmage.

Though rookie quarterback Justin Fields had probably his best all-around game, the Bears couldn't get the stops they needed. It added up to another rough afternoon following back-to-back losses to Green Bay and Tampa Bay, including a 35-point thumping by the Buccaneers that was Chicago's most lopsided blowout since 2014.

It left the third-place Bears (3-5) four games behind the NFC North-leading Packers (7-1).

The offense. Chicago's 22 points were two shy off its season high, and with 324 yards, the Bears went over 300 for the fourth time. Not exactly a high bar. But considering they came in last in the NFL in total offense and passing and 30th in points per game, it was at least a small step. The Bears were also 8 of 15 on third downs, though they need to do a better job in the red zone. They were 1 for 3 on Sunday.

The defense. The Bears got torched for 467 yards for their highest total since they allowed 541 in an overtime loss at Miami on Oct. 14, 2018. They've now given up more than 30 points and 400 yards in back-to-back games.

Without Mack, Jimmy Garoppolo had all the time he needed. The veteran threw for 322 yards, ran for two touchdowns and did not get sacked. San Francisco scored on seven consecutive possessions after missing a field goal on the opening drive.

Fields. Quarterbacks coach John DeFilippo said Fields had “by far his best game." The former Ohio State star threw for 175 yards and ran for 103, making him the first Chicago QB to rush for 100 since Bobby Douglass in 1973.

Fields' 22-yard TD run in the fourth quarter in which he spun away from at least two defenders and avoided a few more as he turned up the sideline was simply spectacular. His 8-yard pass rolling left to a diving Jesse James in the end zone just beyond a lunging cornerback Josh Norman in the second quarter was neat, too.

“He played on time and in rhythm," Nagy said. "His decision-making was excellent. Maybe one or two plays here or there, but that goes along with the young, that goes along for any quarterback, let alone a rookie. He also made special plays.”

CB Kindle Vildor. The Bears were leading 13-6 near the end of the first half when the second-year pro let Deebo Samuel get a step behind him on a 50-yard reception to put the ball on the 4. That led to a field goal as time expired.

Nagy said Mack remains day to day and the Bears were evaluating Jackson, RB Damien Williams (knee) and TE J.P. Holtz (concussion protocol) after they were hurt on Sunday. ... RB David Montgomery (sprained knee), on injured reserve, missed his fourth consecutive game. “He is improving everyday and we’re working through his status,” Nagy said. ... The Bears activated TE Jimmy Graham from the reserve/COVID-19 list Monday, leaving them with one player on it after a recent surge — injured right tackle Germain Ifedi.

6 — Receptions for the tight ends, three each each for James (38 yards) and Cole Kmet (24 yards). Bears tight ends had just 23 catches through the first seven games, with 19 of them going to Kmet.

The Bears visit Pittsburgh on Monday night, hoping to end their three-game skid.