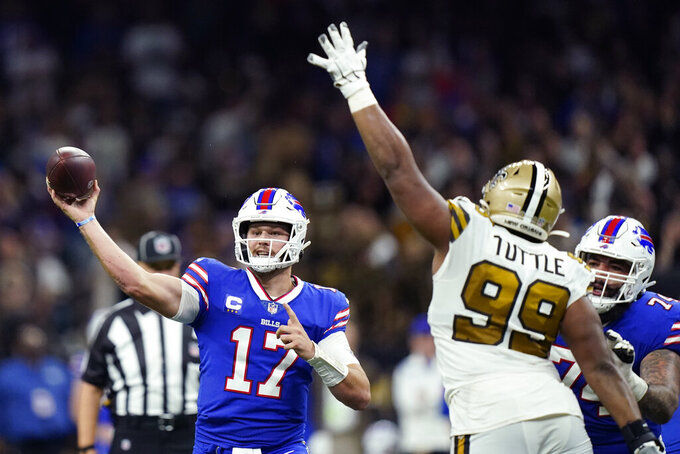 ORCHARD PARK, N.Y. (AP) — The Buffalo Bills righted their ship, at least momentarily, with a rousing 31-6 victory over the Saints on Thanksgiving night in New Orleans.

Now, they’ll have to navigate the rest of their playoff run without their most important defensive player. The team announced Friday that Pro Bowl cornerback Tre’Davious White would miss the rest of the 2021 season with a torn ACL suffered in the second quarter of the win.

White, 27, has started 72 games in his Bills career and has become one of the highest-paid cornerbacks in the NFL, a two-time Pro Bowl selection and an All-Pro in 2019. He underwent an MRI on Thursday morning. The team confirmed the worst fears of Bills fans later in the afternoon.

The Bills are already thin at cornerback behind White. Many felt he was their most indispensable player after quarterback Josh Allen. Buffalo’s defense leads the NFL in yards per game and yards per play. But the pass defense, perhaps the best in the game, will suffer greatly from his absence.

The offense, which has been maddeningly inconsistent over the past two months, will have to be even better if the Bills are to win the AFC East and perhaps gain the No. 1 overall seed in the conference.

Allen says the Bills need to start stacking wins as they head into the home stretch and a potential Super Bowl run. Winning two games in a row would be a start. The Bills have alternated wins and losses in seven straight games, dating back to a win at the Chiefs on Oct. 10.

On Thursday, Allen passed for 260 yards and four touchdowns, his sixth four-TD performance in the last two years. Buffalo’s defense limited an injury-riddled Saints team to 190 yards and 3.3 yards per play. The Bills’ defense leads the NFL in yards per pass attempt at a stunning 5.0. But that was with White operating as a shutdown cornerback.

“Prayers up for him,” Allen said of White after the win. “I hope nothing’s too serious and I know all the guys in the locker room are praying for him and hurting with him. You can’t say a single bad thing about that man. He comes in and busts his (butt) every day.

“He’s such a great teammate. He talks to everybody the right way and he just does the little things well that not many people see, but that’s why he’s so good … whatever the case may be, we got to have guys step up. I think you guys saw Dan Jackson come in and make some good plays. And again, we’re gonna have to have that going forward, I guess.”

White’s injury comes just as the Bills enter the toughest part of their schedule. They play the Patriots twice in four weeks, and they go to Tampa in two weeks to take on Tom Brady and the defending Super Bowl champion Bucs. Tampa Bay leads the NFL in points per game and the Pats have put up 35 points a game during their five-game winning streak.

“The easiest way to get to the playoffs is winning your division,” Allen said, “and we’ve got to continue to find ways to stack these wins. Every week is a one-game season and we’ve got to look at it that way and find ways to win football games here going forward. But again, it’s the pursuit of perfection.”

The Bills have been perfectly inconsistent for nearly two months. The quest for perfection will be even more daunting without one of the top defensive backs in the league.

The defense limited the Saints to 190 total offensive yards and a paltry 3.3 yards per play, improving their league-leading averages in both categories.

Allen threw interceptions on the last two drives of the first half, including the first red-zone pick of his career. He has seven interceptions in his last four games after throwing three in his first seven.

Dawson Knox. He had two touchdowns receptions against the Saints, giving him seven on the season, breaking the team record for TD catches by a tight end in a season.

Left tackle Dion Dawkins was beaten for an early sack and again on the interception when Allen’s arm was hit. Dawkins also had a holding call that put the Bills into first-and-20.

61 — the Saints' total yardage on four returned kickoffs. The Bills’ coverage units limited New Orleans to drive starts at the 17, 17, 21 and 14 after those returns.

Looking to win a second straight game for the first time since Oct. 10, the Bills host the Patriots in a key AFC East clash in Buffalo on Monday, Dec. 6.