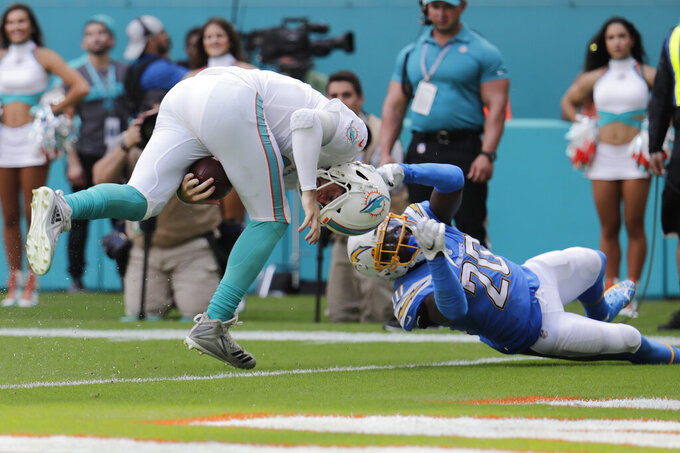 MIAMI (AP) — Never mind whether the Miami Dolphins will win a game this year. There's reason to wonder whether they'll ever cover a point spread.

Despite being big underdogs every week, against the spread the Dolphins are 0-4.

Against the league they're 0-4, too. Miami has been outscored 163-26, the worst four-game point differential in NFL history, and remains on pace both to score the fewest points in a 16-game season, and to allow the most.

As the Dolphins staggered into their bye week Monday, rookie coach Brian Flores said he wanted his players to stay positive.

"There's obviously some disappointment with the way we've started," Flores said. "But I always want our team to look toward the next day and the next challenge. And I think they'll do that. To go the other way helps no one."

One statistical sequence hints at cause for optimism: 49, 43, 25, 20. Rather than lottery numbers, those are Miami's week-by-week margins of defeat.

Yes, the disparity is shrinking. But are the Dolphins improving? That's a risky bet.

In Sunday's 30-10 loss to the Los Angeles Chargers, Miami's offense played perhaps its best 30 minutes of the season in the first half.

The Dolphins scored their second touchdown of the year and even led for the first time — for nearly four minutes. Josh Rosen finished the half 12 for 16 for 159 yards, but Jason Sanders missed two field goals, and the Dolphins trailed 17-10.

"We're a young team," he said following his second start with Miami. "The more snaps we have on the field, the better we'll get."

In the second half the Dolphins gained 36 yards, and the defense failed to force a punt as the Chargers pulled away.

After halftime this season, Miami has been outscored 81-0 while totaling 262 yards in the equivalent of two games.

"If I had an answer, we'd correctly adjust for it," Rosen said. "We're figuring that out."

The bye gives Flores and his players extra time to mull over the problem — and others.

"Back to work," defensive end Charles Harris said. "Training follows wherever the leader goes. I think coach Flo isn't giving up in terms of us working hard and getting back to the basics."

Defensive end Taco Charlton had a sack for the second game in a row since being claimed on waivers. He also had six tackles, one tackle for a loss and two quarterback hits.

Charlton was a 2017 first-round pick by the Dallas Cowboys, who released him after Week 2. He has stood out in a Miami defensive front that has otherwise applied little pressure, and the Dolphins are tied for next to last in the NFL with five sacks.

Safety Reshad Jones, who returned after missing two games because of ankle injury, got burned on two touchdown passes.

"I had a little rust," Jones said.

Receiver Jakeem Grant, who has battled repeated injuries in the past year, left the game with a hamstring issue.

Zero: Five other teams will head into Week 5 winless. The Dolphins play four games against those teams, including their next opponent, Washington (0-4). The No. 1 pick in the 2020 draft could be at stake when the Redskins visit Miami on Oct. 13.