Woods returns to NFL with Seahawks after opting out in '20 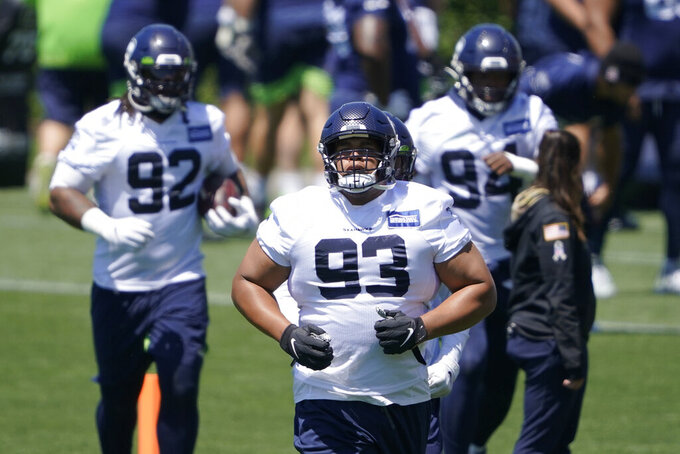 FILE - In this June 16, 2021, file photo, Seattle Seahawks' Al Woods (93) runs between drills during NFL football practice in Renton, Wash. Woods always intended to continue his NFL career, even when he decided to join the small pool of players who opted out of the 2020 season due to the COVID-19 pandemic. (AP Photo/Ted S. Warren, File)

RENTON, Wash. (AP) — Defensive tackle Al Woods always intended to continue his NFL career when he joined the small group of players who opted out of the 2020 season due to the COVID-19 pandemic.

The Seattle Seahawks feel like they’re the beneficiaries of Woods’ decision to keep on playing.

“I had a huge smile on my face. I wanted to get him back here. It’s a blessing to have him back,” defensive line coach Clint Hurtt said. “This is a stud guy. He is the example for any young player, not just the linemen, any young player, what it is to be a man. To be a pro’s pro, how to take care of your body, family, understanding the balance between life and football.”

It was his understanding of that balance that led Woods to step away from the NFL last summer as he was getting ready to start a season with Jacksonville after spending 2019 with Seattle. With his wife pregnant with their third child, who was born this March, Woods was in the final day of intake testing with the Jaguars when he decided football needed to take a backseat.

“I was on my third day of testing, getting ready to go into the facility the next day and I called my wife and I told her and I said, ‘This ain’t sitting right. I’m too worried about you and the kids being in Jacksonville with Jacksonville being a hot spot,’” Woods recalled. “You go to the grocery store, you bring that home and it’s a whole big ordeal. She was like, ‘If you ain’t feeling it, come home.'"

Woods was one of 67 players to bypass playing last year due to the pandemic. It was a needed break, he said, after having been beat up by 10 seasons in the league and a number of injuries after the conclusion of the 2019 season with Seattle.

But Woods remained engaged with the league, sitting down every Sunday to watch two teams in particular: the Jaguars, who retained his rights, and the Seahawks.

“You find yourself actually in the game,” Woods said. “You know the call. You see when they line up, ‘OK, I know the defense.’ You’re playing the game in your head. Then you’re critiquing the guy that you’re watching. ... It becomes more analyzing film than actually sitting there enjoying the game.”

Woods, 34, started training in December to get himself ready for this season but was released by the Jaguars during the offseason.

About a week later, Seattle called.

“He’s big, strong, and he has a certain presence about him,” defensive coordinator Ken Norton Jr. said. “When you have a guy that size it gives you a certain confidence that you can go into any fight as long as you have a big man like that with you. He’s a leader, guys look up to him, and we talk about being dominant up front. That’s the kind of guy you like getting off of the bus first.”

Woods plays a thankless position on the defensive line, mostly lining up over the center. His primary job is to crowd the middle and keep offensive linemen from getting to the second level and engaging Seattle’s linebackers.

Woods’ best statistical season came in 2017 when he started all 16 games for Indianapolis and had 44 tackles. In Seattle, he’ll be part of a rotation of defensive tackles that includes Poona Ford, Bryan Mone and Robert Nkemdiche.

“He’s got to be able to handle both ‘A gaps’ and keep the center off of our linebacker, period point blank, so Bobby (Wagner) can run and go hit the football and do what he does and make something special,” Hurtt said. “Bobby is gonna get the credit and we know how great Bobby is. But Al being a man’s man at that spot is what helps Bobby be that much more effective.”