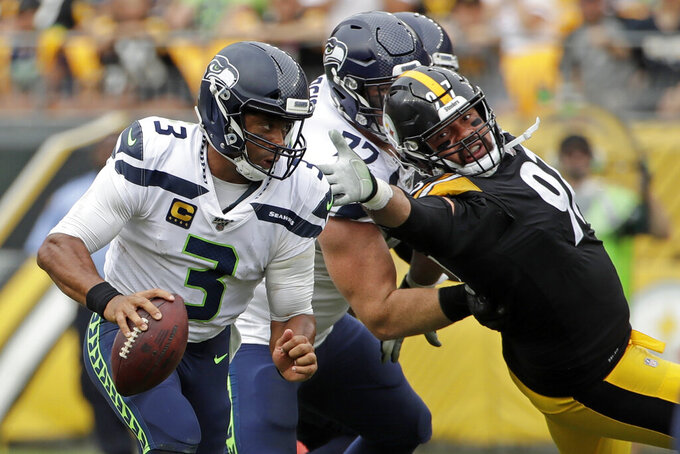 SEATTLE (AP) — In his 13 seasons in charge New Orleans coach Sean Payton has always had one constant by his side.

Nearly every game. Nearly every snap. It's almost always been Drew Brees on the other end of the receiver, listening to what Payton is saying, and for the most part tormenting opponents.

And now Brees is gone for an undetermined time after surgery to repair an injured ligament near his right thumb. It's a test Payton's never faced, being without Brees for an extended period. It begins on Sunday when the Saints face fellow NFC contender Seattle.

Brees' injury comes in what was supposed to be a redemptive season for the Saints, with Super Bowl expectations that could put to rest the anguish of missing the title game a year ago, victimized by an officiating non-call. And for now, there is no panic among the Saints.

"That's the thing. Drew's down, we all know that. But we've still got the same coaching staff. We've got the same guys calling plays, especially like you said, Sean," New Orleans running back Alvin Kamara said. "I don't feel like Sean's down. He's ready for the challenge."

Brees has failed to start just three games since he and Payton arrived together in 2006. Not surprisingly, the Saints are 0-3 in those games, although two of those came in Week 17 with nothing at stake for New Orleans. Which is why this injury and this absence is so significant. It will be Teddy Bridgewater's team — with some Taysom Hill sprinkled in — for the next six games before the Saints' bye and likely any consideration of Brees' return.

"The job for us as coaches is to put a plan in place that gives our players the best chance to win," Payton said. "I don't know if any one person has to change or step up but, by in large the group I think does."

One person not expecting any sort of drop off is Seattle coach Pete Carroll, in part because of his admiration for the job Payton has done.

"After a few years coaching, you look forward to these kinds of matchups. It's one that we've been looking toward through the offseason," Carroll said. "I have great respect for what he's done. He's a fantastic coach and I like that he's sculpted and then re-sculpted his team a couple times over the years and you can see the difference."

The Seahawks won their first two games for the first time since the 2013 season that ended with Seattle winning its only Super Bowl title. But the Seahawks been lucky in getting to 2-0. Seattle beat Cincinnati by one in the opener, a game when the Bengals were without A.J. Green. They held off Pittsburgh 28-26 last week with Ben Roethlisberger playing only half the game.

And now they face the Saints minus Brees.

"You definitely got to remind the guys not to let their guard down because any day, you're in this professional league and the guys behind those guys are professionals," Seattle linebacker Bobby Wagner said. "You can't take anybody lightly because they can come out having one of their best games."

Here's what else to watch as the Seahawks look to win their fourth straight over the Saints in Seattle:

Bridgewater started Week 17 last year, but his last meaningful starts came during the 2015 season before suffering a catastrophic knee injury that sidelined him for the better part of two seasons and derailed his career. Bridgewater was 17 of 30 for 165 yards after taking over for Brees last week against the Rams.

"It's nothing like being out there during the games when it counts the most," Bridgewater said. "Not saying the preseason doesn't count. I'd never take the game for granted. But just to go out there and compete at the high level is what that means."

It's worth mentioning how good Russell Wilson has been to start the season. He's completing 78 percent of his passes, has five touchdowns and no interceptions, and last week had his ninth career game of at least 300 yards and three touchdowns.

The Saints' pass rush has produced nine sacks through two games, including three by reserve defensive end Trey Hendrickson, who seems to have made a big jump in his third season. He had two sacks as a rookie and none last season when he was a healthy scratch a number of games. For now, though, he has one more sack than 2017 first-team All-Pro Cam Jordan and two more than 2018 first-round draft choice Marcus Davenport. New Orleans' front has been productive so far without help from 2016 first-rounder Sheldon Rankins, who is close to returning from an Achilles tendon tear last January.

The Saints will be facing a Seattle offensive line that has underperformed so far and gave up four sacks last week to Pittsburgh.

How will the Saints use Hill? They've had the luxury of exposing him to heavy contact on special teams, as a tight end and as a change-of-pace, read-option QB because they had Bridgewater as a more conventional backup in the event of a Brees injury. If Bridgewater starts, Hill likely would be the primary backup, which could conceivably prompt Payton to dial back Hill's role as a utility player.

Seattle is always really good at home: It has been exceptional in the first month of the season under Carroll. Seattle is 15-0 in September home games since Carroll took over in 2010. The Seahawks are the only unbeaten team in September during that time frame.