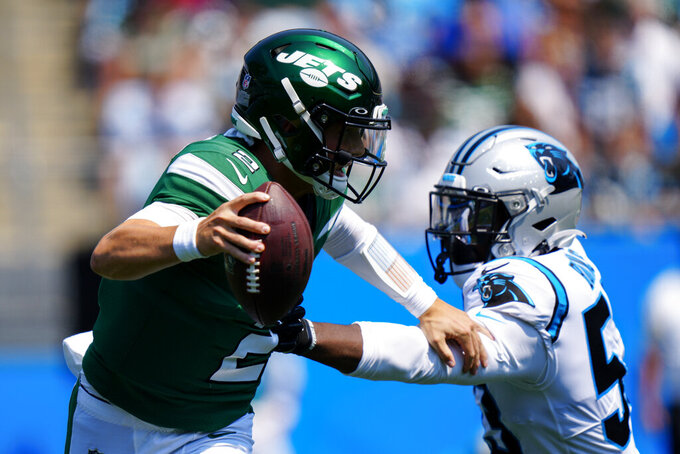 That will mean he has won “the bet.”

Burns and new Panthers pass rusher Haason Reddick made a wager before the season on who’ll have the most sacks this season. The loser buys the winner a new golf cart — with accessories — for next summer.

“I already told him how I want mine done — black and purple and all spotted out,” Burns said with a laugh.

The friendly wager is providing motivation for both players as Reddick already has three sacks and Burns has two sacks entering Carolina's Week 3 Thursday night game against the Houston Texans (1-1).

“I'm keeping an eye on him,” Reddick said of having Burns in the rearview mirror.

The competition is benefitting the team as well, as the Panthers' 10 sacks are tops in the league and their defense ranks No. 1 overall in total yards allowed, yards rushing and points allowed.

The bet is all in good fun, and both players are helping each other succeed.

In fact, nobody was happier with Reddick's arrival than Burns. Reddick had 12 sacks last season with the Arizona Cardinals, but opted to sign with the Panthers as a free agent, rejoining former Temple coach Matt Rhule in Carolina. His signing was meant to take some of the double teams away from Burns, who still managed nine sacks last season despite getting little help from his teammates.

When they're not talking golf carts, they're talking football — particularly getting to the quarterback.

"How we are being set by the tackles on each side, what worked, what didn’t work. Always picking each other’s brain and trying to see, OK, you use that (move) and then let me see if I can use this and beat them with this.”

Said Burns: “If I see he has success with this move on this particular guy I will ask him about it and I'll try the move myself. Or if I see something I will tell him, ‘hey this didn’t work because (the offensive lineman) is sitting heavy on his inside, or whatever the case may be. It's just sharpening our IQs."

Rhule hadn't heard about the bet until asked about it during a news conference Tuesday.

He said he likes what he's seen from both players, but added that Carolina's early season success is the product of all 11 guys playing together.

And he's right on point. The Panthers have received good push from defensive tackles Derrick Brown, DaQuan Jones and Bravvion Roy, while Jeremy Chinn and Shaq Thompson have been productive on blitzes. Carolina's cornerback tandem of Donte Jackson and Jaycee Horn have been stellar in coverage.

“When you watch our defense right now it's been everybody — it's been the coverage, guys inside pushing the pocket." Rhule said. ”It's one of the things I have wanted our team to understand: you win by everyone doing their job. If we have success as a team, you will have success as individuals.”

Back in 1996, Carolina had one of the better pass rush tandems in league history in Kevin Greene and Lamar Lathon.

The duo called themselves “Salt and Pepper” and had a similar sack bet involving straight cash. Greene led the league with 14 1/2 sacks and Lathon finished tied for second with 13 1/2, helping the Panthers reach the NFC championship game in just their second season.

But unlike Lathon and Greene, who were similar in size and played outside linebacker in a 3-4 scheme, Carolina's new pass rushers have very different body builds and play different positions. Burns is a chiseled 6-foot-5, 252-pound defensive end, while Reddick is much smaller 6-foot-1 and 235 pounds outside linebacker.

Regardless, both have been effective at getting to the quarterback.

Burns would have been tied with Reddick for the lead on Sunday had his sack-fumble on Jameis Winston not been overturned and ruled an incompletion.

“The refs hate me,” Burns said with a laugh.

So who’ll win the bet?

“Oh, I'm not (answering) that,” Panthers cornerback Donte Jackson said. “I hope they both win. That means more passes up in the air for us (in the secondary) to intercept."