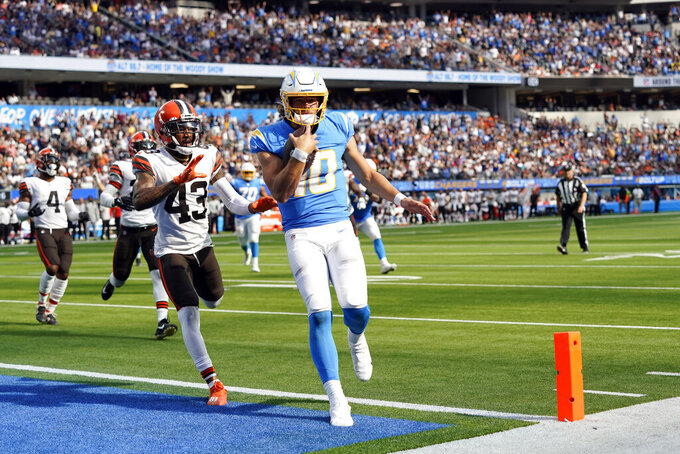 Los Angeles Chargers quarterback Justin Herbert (10) scores a touchdown during the second half of an NFL football game against the Cleveland Browns Sunday, Oct. 10, 2021, in Inglewood, Calif. (AP Photo/Gregory Bull)

OPENING LINE: Ravens by 3 1/2, according to FanDuel SportsBook.

TURNOVER DIFFERENTIAL: Chargers plus-2; Ravens minus-1.

CHARGERS PLAYER TO WATCH: RB Austin Ekeler is tied for the league lead with seven touchdowns (four rushing, three receiving). He was the first running back since 2009 to have three TDs in the fourth quarter as Los Angeles won last week’s game against Cleveland.

RAVENS PLAYER TO WATCH: TE Mark Andrews is coming off an 11-catch, 147-yard night against Indianapolis, and with WR Sammy Watkins nursing an injury, it's possible the Ravens will need to lean heavily on Andrews again.

KEY MATCHUP: Chargers QB Justin Herbert against the Baltimore secondary. The Ravens' defense is reeling a bit after allowing Carson Wentz to pass for 402 yards. Expect Los Angeles to test the Baltimore DBs early and often.

KEY INJURIES: Chargers WR Mike Williams, fifth in the league with 471 receiving yards, is questionable after not practicing all week due to swelling in one of his knees. ... LB Drue Tranquill, fourth on the Chargers with 17 tackles, is out after a pectoral injury against the Browns. ... Michael Schofield moves to the starting spot at RG for Los Angeles after Oday Aboushi went down with a season-ending knee injury last week. ... Watkins left Baltimore's win over the Colts with a hamstring injury. ... The Ravens are still waiting on the debut of rookie WR Rashod Bateman, who has been out with groin problems.

SERIES NOTES: Los Angeles won the most recent meeting, beating the Ravens in Lamar Jackson's postseason debut. ... Baltimore is 4-3 against the Chargers under coach John Harbaugh, including playoffs. ... The most recent regular-season meeting between the teams was a 22-10 Ravens victory on the road in 2018, just a couple weeks before the playoff meeting.

STATS AND STUFF: Herbert has thrown for a league-best 11 touchdowns with no interceptions over the past three games. He has 11 300-yard games in 20 starts, the most by a player in his first two seasons. ... Chargers WR Keenan Allen is fifth in the league with 34 receptions, and Williams leads the league with six receiving TDs. He had a career-high 165 yards last week. ... Derwin James had a career-high 17 tackles last week for Los Angeles, the most by a safety in a game since 2016. ... According to Sportradar, Brandon Staley is the 31st head coach since the merger to start his career 4-1 or better. Staley is the first Chargers coach since Marty Schottenheimer in 2002 to win four of his first five games with the Bolts. ... The Ravens had their 43-game streak of 100-yard rushing games snapped against Indianapolis. ... In the win over the Colts, Jackson became the first player in NFL history with at least 400 yards passing, four touchdown passes and 50 yards rushing with no interceptions. ... Baltimore WR Marquise Brown had a career-high nine catches against Indianapolis. ... Ravens LB Odafe Oweh is tied for the lead among rookies with three sacks.

FANTASY TIP: The Ravens may try to re-establish their running game against a Los Angeles defense that is ranked dead last against the run.