Colts look to shore up offensive, defensive lines in draft 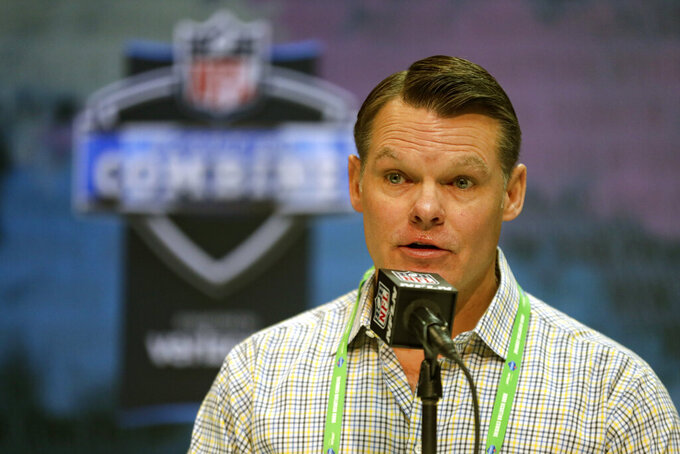 FILE - Indianapolis Colts general manager Chris Ballard speaks during a press conference at the NFL football scouting combine in Indianapolis, in this Tuesday, Feb. 25, 2020, file photo. With his team facing major holes at left tackle and edge rusher heading into next week's NFL Draft in Cleveland, April 29-May 1, 2021, Indianapolis Colts owner Jim Irsay hopes to fill one need with the No. 21 overall pick and the other over the final six rounds. But Irsay isn't tipping his hand about which way — or perhaps a third way — the Colts are leaning, certainly not with general manager Chris Ballard calling the shots. (AP Photo/Michael Conroy, File)

He knows they'll form a blueprint for success or a pathway to failure.

So with Indy facing glaring holes at left tackle and edge rusher as the NFL draft approaches, Irsay hopes to fill one of the those needs with the No. 21 overall pick.

“As great as (Patrick) Mahomes II is, we saw what can happen when you lose both tackles," Irsay said, referring to the Super Bowl. “We know defensively, it’s about getting pressure on the quarterback. You know the guys in this league, if you let them play flag football, sit back and throw the ball all day, you’re going to be in trouble."

Irsay has learned not to tip his hand early and certainly not with general manager Chris Ballard calling the shots.

In his first four drafts with the Colts, Ballard has demonstrated a propensity for sticking to the team's draft board, regardless of need, and making trades to collect extra picks.

This time, there should be plenty of options when the Colts select.

Pass rushers expected to be available include Kwity Paye of Michigan; the Miami tandem of Jaelan Phillips and Gregory Rousseau; Oklahoma standout Ronnie Perkins; and Washington defensive end Joe Tryon. Some could even be there when the Colts make their second pick, at No. 54 overall.

Meanwhile, with most expecting the top two tackles to be off the board early, others such as Christian Darrisaw of Virginia Tech, Teven Jenkins of Oklahoma State or Liam Eichenberg of Notre Dame could still be around for Ballard at No. 21.

But since standing pat in the first round in 2017, Ballard has moved around frequently. He traded back in 2018 and 2019 before sending last year's first pick to San Francisco for All-Pro defensive tackle DeForest Buckner.

“Both positions (left tackle and edge rusher) are important," Ballard said Friday. “But it’s kind of like I told you all about the quarterback position. Taking one just to take one doesn’t necessarily fill the need. It’s got to match up in the draft."

And that means the Colts could throw a curve ball at conventional wisdom and take a different route to reinforce a team with two playoff appearances in the past three seasons.

“I feel confident the way Chris goes about it, there can be an edge rusher and a left tackle and even a cornerback who is impactful," Irsay said. “It’s difficult sometimes to come in and be impactful at all three of those positions quite frankly as a rookie, but it’s certainly possible."

If the Colts pass on a left tackle or pass rusher in Round 1, it could be because they have other options. Irsay has not ruled out re-signing free agent defensive end Justin Houston and noted more help could be found in free agency with more salary-cap friendly contracts now available. As for left tackle, the Colts have considered moving three-time All-Pro left guard Quenton Nelson into Anthony Castonzo's old spot, a position switch that would mean Indy would be looking for a new guard. Castonzo retired in January.

The Colts already have one major chip from this year's draft — Carson Wentz, who the Colts hope will re-emerge as a franchise quarterback. Indy acquired Wentz by trading this year's third-round pick and next year's second-rounder to Philadelphia. If Wentz plays like he did before tearing the anterior cruciate ligament in his left knee in 2017, the Eagles would get a first-rounder in 2022 instead. The deal could be the steal of the draft.

Ballard also has a knack for finding hidden gems on draft weekend. He took two starters — running back Marlon Mack and defensive tackle Grover Stewart — in the fourth round in 2017. He added two-time All-Pro linebacker Darius Leonard and starting right tackle Braden Smith in Round 2 in 2018. Starting linebacker Bobby Okereke and starting safety Khari Willis were taken in the third and fourth rounds in 2019. And safety Julian Blackmon, a third-round pick, and cornerback Isaiah Rodgers, a sixth-round pick, became key cogs as rookies last season.