Seahawks looking at new role for Darrell Taylor in Year 2 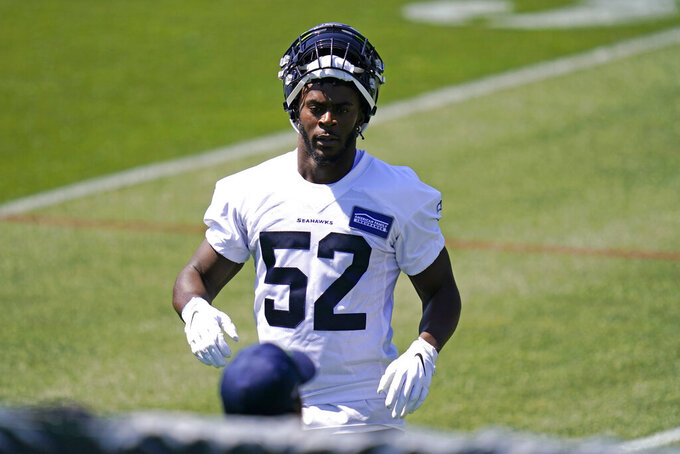 RENTON, Wash. (AP) — After the recovery from a leg surgery relegated Darrell Taylor to a spectator's role for his entire rookie season, the Seattle Seahawks are trying a different approach heading into his second year.

As in a different position.

Taylor was drafted to be a pass rushing option off the edge, but now Seattle is taking time to see how he may fit in as a strongside linebacker playing on the edge. It’s a position of need for Seattle with veteran K.J. Wright currently unsigned as a free agent, and it appears the Seahawks are going to give Taylor a chance to earn the job.

“We’re double-teaching him and he’s just such a good-looking athlete, he looks like he can do whatever you need him to do,” coach Pete Carroll said. “We have no real restrictions or hesitation on that, on his range of play.”

Taylor was one of a few players with experience on the field as a smaller-than-normal group gathered for Seattle’s rookie minicamp Friday. In past years, Carroll has wanted a big pool of players for the rookie weekend to see who the Seahawks might be interested in adding ahead of the offseason program.

That’s not the case this year, with only 31 players on the roster for this weekend. But that meant more attention could be paid to specific players like Taylor.

“This is hugely important for him,” Carroll said. “His attitude and his want-to is so good right now. He’s in a great space, so it’s good to get him out there, just get some turns and some reps. He’s got some catching up to do.”

Seattle had high aspirations for Taylor when it made him a second-round pick in the 2020 draft. They saw him as an immediate help to their pass rush after he starred in that role at Tennessee.

But issues with a leg injury and subsequent surgery in early 2020 kept Taylor in perpetual uncertainty. At first, Seattle was hopeful of getting him back midseason. Then came setbacks in his recovery. Just as it appeared as though Taylor could debut in the postseason, Seattle lost its opening round playoff game to the Los Angeles Rams.

Taylor said he had a stem cell injection in his leg last November that accelerated the recovery and got him to the point where he had a chance to play if Seattle’s postseason run had continued.

“I don’t think that leg will ever be behind me. It’s just going be a part of me because I had surgery,” Taylor said. “But I’m definitely looking forward and a fresh start for sure.”

It appears that Seattle wants to replicate the role Bruce Irvin had early in his career where he played strongside linebacker on early downs and became the primary pass rusher in obvious passing situations. Irvin thrived in the role and it eventually helped him cash in when he left for a big payday with the Raiders.

“Today was very exciting. Being out here with my new teammates and stuff, man it was something for the books,” Taylor said. “I’m excited to look forward for the future and what’s coming up next.”