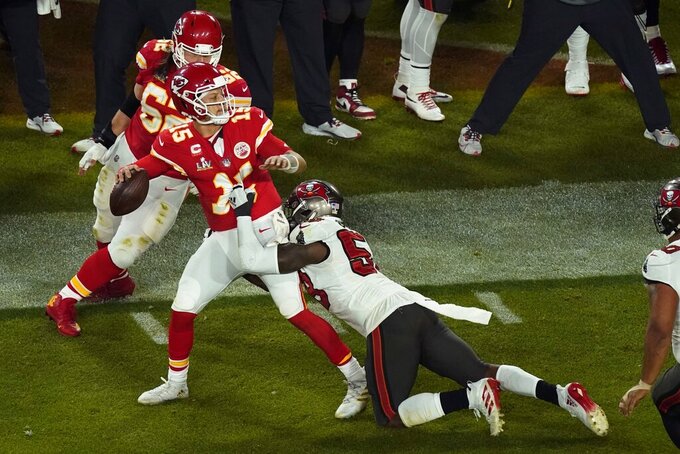 Patrick Mahomes has always seemed to save his best work for the most important down.

With the ability to scramble and improvise with his legs and make magic with his arm, Mahomes has made a habit of demoralizing opponents by turning bad situations on third down into drive-extending ones for Kansas City.

Those big plays fueled the Chiefs’ success the past three seasons. The lack of them doomed Kansas City in the Super Bowl when Mahomes didn’t complete a single third-down pass until late in the fourth quarter of a 31-9 loss to the Tampa Bay Buccaneers on Sunday night.

The Chiefs came into the game having converted 49.5% of their third-down tries this season for the second-best mark in the NFL. Mahomes posted an impressive 117.1 rating this season on third downs and has a league-best 113.8 for his career.

Mahomes missed his first eight passes on third downs and finished 4 for 12 for 46 yards and an interception for an 11.1 rating that was fourth worst on third downs in the past 30 Super Bowls.

“They had a good game plan,” Mahomes said. “They kind of took away our deep stuff, took away the sidelines and did a good job rallying to the football and making tackles. We weren’t executing early, had a few miscues and we weren’t on the same page.”

Mahomes converted Kansas City’s first third-down attempt of the game when he scrambled for 11 yards on third-and-7. The Chiefs didn’t convert another until they were down 22 points more than halfway through the fourth quarter.

What followed were eight straight third-down incompletions by Mahomes, who was repeatedly forced on the run behind Kansas City’s injury-riddled offensive line, and given no help from his receivers.

On Kansas City’s second drive of the game, Mahomes ran around and launched a deep ball that hit Tyreek Hill in the face mask and fell incomplete near the goal line. That led to the first of three field goals for the Chiefs.

“It was a huge dropped pass,” Kelce said. “At that point a lot of momentum was on their side. It was tough sledding from there.”

Mahomes had to throw a ball away on a third down late in the first half that set up a second field goal. It gave Tom Brady and the Bucs time to drive down to a late TD that made it 21-6 at the break.

Lavonte David broke up a third-down pass to Kelce on the opening drive of the second half to limit KC to another field goal before Mahomes’ desperation pass to Hill on third down on the next drive got deflected for an interception.

By then the rout was on as the Bucs led 28-9. It didn’t matter much when Mahomes converted his first third down with a pass on a 4-yarder to Hill with less than six minutes to play.

Mahomes added another completion for 23 yards to Hill on third-and-33, but it didn’t matter much at all as Mahomes couldn’t convert on fourth down and the Chiefs were once again held out of the end zone — a place they never reached Sunday night.

“Those are the two most important parts of the field,” Mahomes said about third downs and the red zone. “They were just better than us today. I don’t know what to say. They executed at a high level defensively and they made adjustments.”