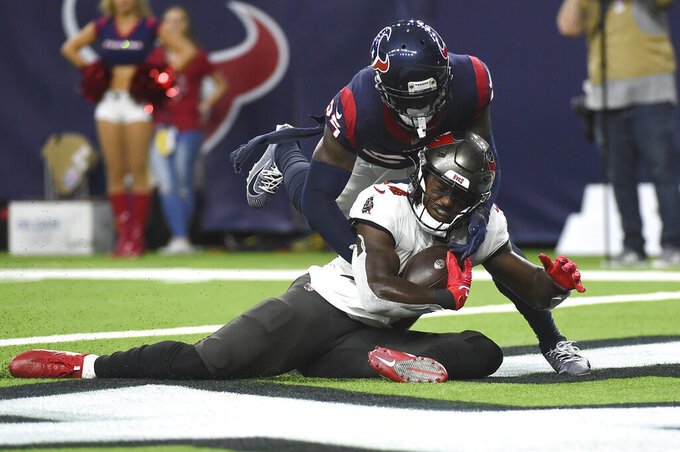 Tampa Bay Buccaneers wide receiver Chris Godwin (14) is tackled by Houston Texans' Desmond King II (25) after making a catch and run for a touchdown during the first half of an NFL preseason football game Saturday, Aug. 28, 2021, in Houston. (AP Photo/Eric Christian Smith)

“We’re 100% vaccinated. Everybody in our organization — all the players, all the coaches, everybody,” Arians said after practice Thursday.

The Bucs open the season at home against the Dallas Cowboys on Sept. 9. The Atlanta Falcons are the other team that’s announced its roster is fully vaccinated.

Running back Leonard Fournette was among players who’ve been vaccinated since training camp began in late July.

“People are still catching (COVID-19), but it just made it a lot better that I have the shot. ... We need every hand in here for these next couple of big games we’ve got coming up, especially the opener,” Fournette said.

By Josh Dubow an hour ago
By Jim Vertuno 4 hrs ago
By Dennis Waszak Jr. 5 hrs ago
6 hrs ago
By Barry Wilner 7 hrs ago