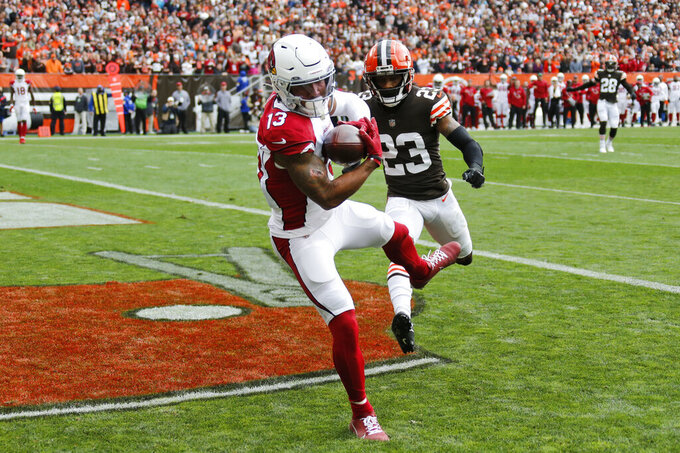 NEW YORK (AP) — The birds in the desert are still flying high.

And as the NFL's only remaining unbeaten team, the Cardinals retained the top spot in the latest AP Pro32 poll.

The Cardinals received all 12 first-place votes for 384 points in balloting Tuesday by media members who regularly cover the NFL.

The Arizona Cardinals improved to 6-0 on the season with a 37-14 victory over the injury-riddled Cleveland Browns on Sunday.

“The Browns need to get their offensive tackles back for the sake of both QB Baker Mayfield and the offense," said Rick Gosselin of the Talk of Fame Network.

"Left tackle Jedrick Wills and right tackle Jack Conklin are both former top 10 picks in drafts and Pro Bowl-caliber talents. But Wills missed the last two games with an ankle injury and Conklin the last game with a knee injury.

“The Browns have lost the last two games to fall to 3-3 and Mayfield was sacked a season-high five times in last week’s loss to the Cardinals,” Gosselin said.

The Cardinals will try to stay unbeaten as they host the reeling Houston Texans on Sunday.

“Proved in Cleveland that they will be tough as long as (Kyler) Murray stays healthy,” Fox Sports’ John Czarnecki said of Arizona.

The defending champion Tampa Bay Buccaneers moved up a spot to No. 2 after topping the Philadelphia Eagles last week.

Los Angeles' other team, the Rams, remained at No. 4 after soundly beating the New York Giants. The Dallas Cowboys — who are also entering their bye week — gained two spots to No. 5 after outlasting the New England Patriots 35-29 on Sunday in Foxborough.

“Dak Prescott is easily the front-runner for Comeback Player of the Year, and he’s in the mix for MVP,” Newsday’s Bob Glauber said. “The Cowboys look the best they have in years, and Prescott looks the best he has been in his career.”

The Buffalo Bills, who were tied with the Cardinals for the top spot last week, slid all the way down to No. 6 after falling 34-31 on Monday night at Tennessee. The Titans moved up two places to No. 9 and will host another AFC power on Sunday: the Chiefs, who remained at No. 10.

The Green Bay Packers inched up to No. 7 after topping the rival Chicago Bears.