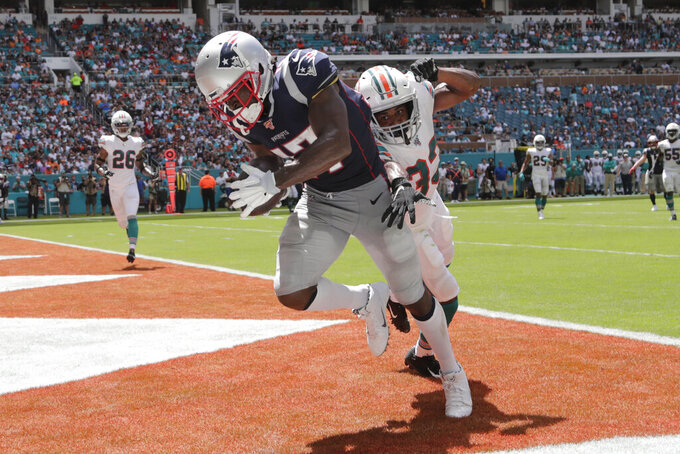 FILE - In this Sept. 15, 2019, file photo, then-New England Patriots wide receiver Antonio Brown (17) scores a touchdown as Miami Dolphins cornerback Jomal Wiltz (33) attempts to defend during the first half at an NFL football game, in Miami Gardens, Fla. Antonio Brown practices with the Tampa Bay Buccaneers for the first time, Wednesday, Nov. 4, 2020, and is eager to take advantage of his latest opportunity to continue his NFL career. (AP Photo/Lynne Sladky, File)

TAMPA, Fla. (AP) — Antonio Brown says he’s grateful to be back in the NFL and reunited with Tom Brady.

“Tom is my boy, one of the greatest leaders to be around,” the seven-time Pro Bowl receiver — back after missing most of last season and then serving an eight-game suspension for violating the league’s personal conduct policy — said after practicing with the Tampa Bay Buccaneers for the first time Wednesday.

“He’s encouraging, always inspiring. He brings out the best in people around him,” Brown, wearing a Brady TB12 hat during a video conference call, added. “He wants the best for everyone around him.”

The former Steelers, Raiders and Patriots receiver signed a one-year contract that could be worth up to $2.5 million and expects to make his debut for the Bucs when the NFC South leaders host the New Orleans Saints on Sunday night.

The 32-year-old Brown hasn’t played in the NFL since September 2019, when he had four receptions for 56 yards and a touchdown in the only game he played with Brady during a brief stint with New England. The Patriots released him because of off-the-field issues the league is still investigating.

The suspension that ended after the Bucs played the New York Giants on Monday night stemmed from an incident that drew police to the receiver’s home in South Florida earlier this year.

Brown is also facing a civil lawsuit filed by a woman who accused him of sexual assault.

“I took a lot of time off from the game to reevaluate myself, to look within, to get a better perspective of myself and work on myself within and without,” Brown said.

Brady welcomed Tampa Bay's decision to give Brown a chance to resume his career and is allowing the four-time All Pro to stay with him in a home the quarterback is renting from baseball Hall of Famer Derek Jeter.

“I’m extremely grateful to be here. ... First and foremost, being away from the game for a year and a half, just to be a part of the process and be out there with the guys today was surreal, something I don’t take for granted,” Brown said.

Bucs coach Bruce Arians was Pittsburgh’s offensive coordinator when the Steelers drafted Brown in the sixth round in 2010.

Several members of Arians’ current staff, including Bucs offensive coordinator Byron Leftwich, were with the Steelers early in Brown's career.

The receiver said those relationships will help him make the most of his opportunity with the Bucs. He also thanked Brady for steering him to motivational speaker and life coach Tony Robbins, who worked with Brown on anger issues.

“I had good trainers, good people around me in my corner who kept me encouraged, that kept me motivated,” the receiver said. “And I just believed one day I would get a chance to be back in this position. I just tried to check every box to make sure when I was able to get back I was ready to go.”

With the Bucs coming off playing Monday night, Wednesday’s practice was a walk-through as the team prepares for the Saints on a short week.

Brown didn’t participate in the special teams portion of the workout open to the media. He spent much of that time sporting a big smile and talking with running back LeSean McCoy, receivers coach Kevin Garner and running backs coach Todd McNair.

“Everyone else was walking, but he was going full speed,” Arians said. “That's him anyway, but it was good. Guys were helping him. ... It was a good start to the week.”