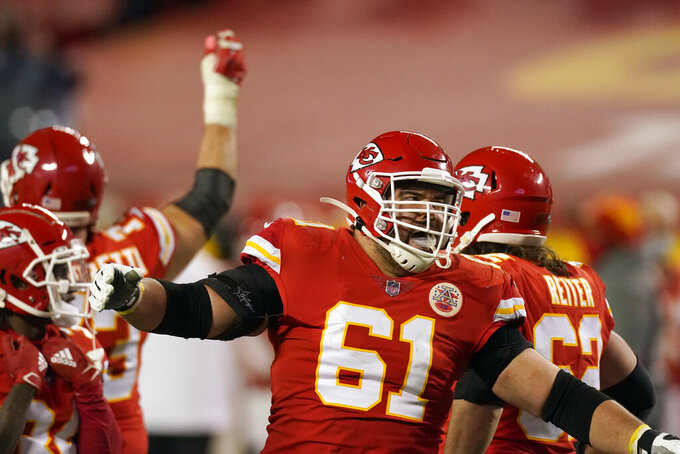 KANSAS CITY, Mo. (AP) — The Kansas City Chiefs were supposed to have a talented lineup of millionaires, each a seasoned veteran of the rough-and-tumble NFL, protecting their half-billion dollar quarterback as they defended their Super Bowl title this season.

Instead, they'll have a motley cast of late-round draft picks, journeymen and castoffs making up their offensive line.

The Chiefs lost Pro Bowl left tackle Eric Fisher to a torn Achilles' tendon in their AFC championship win over Buffalo, which means they are headed to the Super Bowl next weekend with just one starter playing his original position. The other four in the starting lineup consist of a seventh-round draft pick, an offensive guard pressed into service at tackle, another tackle playing on the veteran's minimum and a right guard that wasn't even on the team a few weeks ago.

Of all the worries facing coach Andy Reid, their performance in protecting Patrick Mahomes might be his chief concern.

“Listen, they're talented guys,” Reid said, “and in some cases we've had some young ones step in and, again, we've had some older guys step in. But that combination has been able to get us through some games here, and most of all I think the quarterback trusts them, as do the running backs, and there's good communication.”

To fully appreciate the job the Chiefs have done in patching together their current offensive line, you must first consider what Reid and general manager Brett Veach planned on taking into their opener way back in September.

Fisher was supposed to be joined at left guard by Kelechi Osemele, a former All-Pro who had been released by the New York Jets. Austin Reiter was the expected center with Laurent Duvernay-Tardif at right guard and Mitchell Schwartz, also a former All-Pro and one of the league's most durable players, handling right tackle.

They also had spent a third-round pick on Lucas Niang, who was penciled in as the primary backup at several positions.

That group, with its $35.5 million price tag, didn't even make it to training camp.

Duvernay-Tardif, a trained physician, opted out of the season to help with COVID-19 patients in his native Canada, and Niang also opted out. Osemele tore tendons in both knees and was lost for the year in Week 5. Schwartz hit the COVID-19 list the same week he hurt his back, an injury that ultimately landed him on injured reserve.

Now with Fisher's injury, the Chiefs will have four backups surrounding Reiter when they face the Buccaneers. Mike Remmers, playing for his seventh team, is expected to start at left tackle. Nick Allegretti, a seventh-round pick in 2019, will be next to him. Andrew Wylie had taken over for Duvernay-Tardif at right guard but will slide out to right tackle, while Stefan Wisniewski — who spent most of this season with Pittsburgh — will slide into his place at guard.

Presto! An offensive line making about $7.5 million this season, or about one-fifth the anticipated group.

“We say it every year: These are long seasons. It's a battle of attrition,” Veach said. “It's not a question of ‘if' but ‘when’ the next guy steps up. We have superstars at the top, but we know as the season goes on, guys like Remmers — those guys keep seasons going, and those guys are going to be called up, they train and prepare and work their tails off.”

They'd better be prepared. The Buccaneers had the league's fourth-best pass rush during the regular season, wreaked havoc on the Packers' Aaron Rodgers in the NFC championship and has piled up seven sacks in three postseason games.

One thing the Chiefs have going for them? The guy taking the snap.

Mahomes has one of the quickest releases of any quarterback in the NFL, and his ability to identify blitzes, manipulate the snap count and keep defenses off balance should take some of the pressure off those five guys protecting him.

Mahomes also should be more mobile than he was in the AFC title game, when a toe injury slowed him ever-so slightly.

“They have a really good defense in general,” Mahomes said this week. “They work their tail off like everybody else. They've done a good job all year against a lot of good fronts. I have to get the ball out as quickly as possible and make sure they don't destroy the game. Get it to my playmakers in space and let them make some good things happen.”