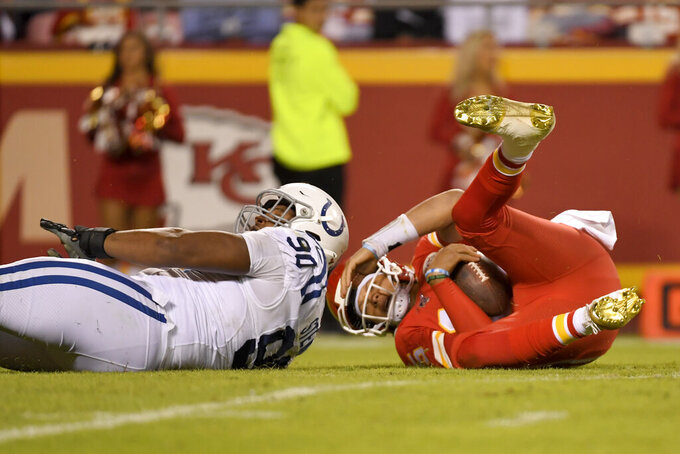 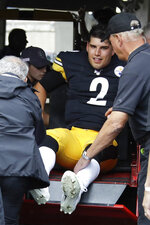 The NFL is down to two unbeaten teams.

Kansas City failed to do much on either side of the ball in a 19-13 home loss to Indianapolis on Sunday night, leaving New England (5-0) and San Francisco (3-0) as the league's only teams without a setback. The 49ers host Cleveland on Monday night.

The Chiefs (4-1) had scored at least 26 points in 27 consecutive regular-season games, the longest streak in NFL history. But the run ended with a lackluster effort against the Colts (3-2), who dominated the line of scrimmage.

Marlon Mack had 132 yards rushing, finding holes against a defense that lost tackles Chris Jones and Xavier Williams to injuries.

The Colts were equally impressive against reigning league MVP Patrick Mahomes. They spent most of the night in Kansas City's backfield, stuffing the ground game and putting constant pressure on Mahomes. He was sacked four times, hit more often, and spent the final few minutes hobbling around Arrowhead Stadium.

Mahomes finished with 321 yards passing and a touchdown.

The Chiefs will try to regroup next week against Houston (3-2), which scored 53 points — the second-most in franchise history — in a victory against Atlanta (1-4).

Here are some other things that happened during Week 5 of the NFL season:

Four teams remain without a victory: Cincinnati (0-5), Washington (0-5), Miami (0-4) and the New York Jets (0-4). At least one of them should snap out of their early season slump next week because the Dolphins host the Redskins.

For now, though, it's the NFL's most winless teams through Week 5 in a decade. Kansas City, St. Louis, Tampa Bay and Tennessee were winless after five weeks in 2009. Each of them ended its drought in the next three games.

The Bengals got the closest to winning Sunday, scoring two touchdowns in a little more than 2 minutes against Arizona and tying the game at 23. But rookie Kyler Murray drove the Cardinals into position for the game-winning field goal on the final play.

Washington and the Jets were downright dismal on offense. The Redskins scored on their second possession against New England, getting a 65-yard run from receiver Cam Sims, but did little else . The Redskins finished with 220 yards and two turnovers.

The Jets would have loved that kind of outburst considering they managed 128 yards at Philadelphia.

Pittsburgh Steelers quarterback Mason Rudolph left the game against Baltimore because of a concussion caused by safety Earl Thomas' hit to the chin.

Trailing 17-13 in the third quarter, Rudolph scrambled to his left, stepped up the field and flicked the ball to teammate James Washington just before the crown of Thomas' helmet hit Rudolph under the chin. Rudolph limply fell to the ground and laid there with his eyes closed while medical personnel rushed to his side. Rudolph woozily made his way off the field and to a nearby hospital for further evaluation.

He was the second Steelers quarterback hurt this season. Starter Ben Roethlisberger is out for the year following elbow surgery.

Carolina, Chicago, Jacksonville, New Orleans and the New York Jets also are without their starting quarterback because of injury.

New England's defense has been even better than its 42-year-old icon.

The Pats are allowing 6.8 points a game, better than two defenses widely considered the best in NFL history.

Mahomes reached 7,000 yards passing in just the 22nd game of his NFL career, becoming the fastest player to reach that milestone in the Super Bowl era. He topped the previous mark by Hall of Famer Kurt Warner (25 games). ... Dallas' Amari Cooper notched his third game with at least 200 yards receiving. Only Calvin Johnson (5) and Jerry Rice (4) have more in the Super Bowl era. ... The Jets have more defensive/special teams touchdowns (3) than offensive touchdowns (2) this season. ... Houston's Deshaun Watson posted a perfect passer rating (158.3) thanks to having the same number of passing touchdowns (5) as incompletions.