Fourth-quarter woes costly for Lions again in loss to Bears 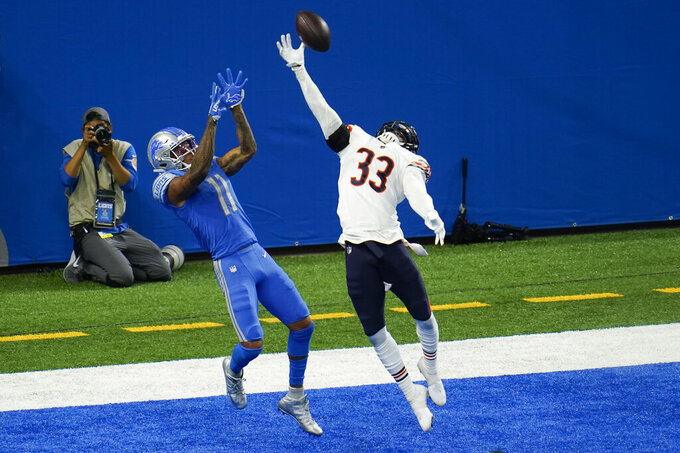 DETROIT (AP) — Matt Patricia's tenure in Detroit has been marked by fourth-quarter collapses.

The Lions lost a 17-point, fourth-quarter lead in a 27-23 season-opening setback against Chicago at Ford Field, where fans likely would have booed the home team if the pandemic didn't keep them away.

Patricia's problems in the final quarter have contributed to his 9-23-1 record as a first-time NFL head coach. And if Patricia can't figure out how to help Detroit get and hold leads, his third season with the franchise will probably be his last.

Lions ownership retained general manager Bob Quinn and Patricia for this season, but their jobs are in jeopardy if the team does not at least contend for a spot in the playoffs.

The Lions lost seven of 12 games last year after blowing leads in the fourth, making it logical for some of them to think this season is starting to look a lot like the last one.

“We actually have to make sure it doesn’t creep in," Patricia said Monday. “Sometimes maybe you hear it too much from the outside world, then you start to think, 'Is that the case?'' But it’s not the case for us inside.

“So right now for us, we have to make sure we understand it was Week 1 and we got to improve Week 2.”

It won't be easy for Detroit to bounce back Sunday because it plays the Green Bay Packers on the road after they opened the season with a 43-34 win over Minnesota.

“We’ve seen that we have a lot of potential and talent, but we just have to finish games," offensive tackle Taylor Decker said.

Even though the Lions struggled in the fourth quarter — again — Patricia spent time talking to players the day after about missed opportunities earlier in the game.

“We focused on a lot of the plays that happened in the first three quarters," he said.

Much was made of running back D'Andre Swift dropping a pass in the end zone with 6 seconds left, but his coach and teammates are trying to downplay it while rallying around the rookie.

“To think that we didn’t win the game because of his play is total inaccurate," Patricia said.

The Lions hurt their chances earlier in the game with mental mistakes such as linebacker Jamie Collins getting ejected for making contact with an official.

There were also physical miscues, including Matthew Stafford's ill-advised pass in traffic that was deflected and picked off in the fourth.

Questionable coaching decisions are up for debate as well such as Patricia choosing to attempt a 55-yard field goal instead of pinning the Bears deep in their territory with a punt late in the game.

“I’m going to pick apart what we did as a staff and see what are the areas maybe we can do different," Patricia said. “Certainly, there’s plays in the game that you want to have back, whether you’re a play-caller or from my standpoint as game management."

The Adrian Peterson-led running game accounted for 138 yards rushing, averaging 4.8 yards a carry. That was the most the team gained on the ground in Week 1 since 1999.

Detroit ranked last in the league last year against the pass and its secondary is banged up. The Lions allowed Mitchell Trubisky to throw three touchdown passes in the fourth quarter.

Peterson, clearly, is not washed up. He had 14 rushes for 93 yards and three catches for 21 yards in his Detroit debut, just four days after his first practice with the team.

Linebacker Jamie Collins got off to a rough start with his new team. He was ejected for making contact with an official while trying to demonstrate how opponents were lowering their helmet into his chest.

“Whether it’s an honest mistake or not, you just can’t do that and that’s the bottom line," Patricia said. “Jamie, he understands that."

Rookie cornerback Jeff Okudah, the No. 3 pick overall, didn’t play the Bears because of a hamstring injury. Veteran cornerbacks Justin Coleman and Desmond Trufant left the opener because of hamstring injuries, an ailment that also put standout receiver Kenny Golladay on the inactive list in Week 1.

11 — Patricia's teams have lost games after leading in the fourth 11 times in his two-plus seasons.

The Lions will look to sign some defensive backs to their practice squad, giving them options if any or all of their banged-up players in the secondary can't play at Green Bay.