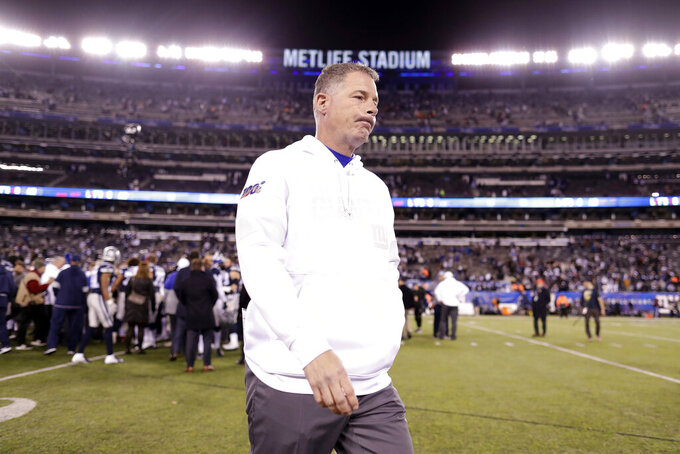 EAST RUTHERFORD, N.J. (AP) — When looking at the New York Giants these days, there is not a lot to like.

Pat Shurmur's team is riding a five-game losing streak and has fallen to 2-7. It's the same record the Giants had after nine games in his first year as coach.

The hope that rookie Daniel Jones generated after replacing Eli Manning at quarterback earlier this season is gone, at least in the stands. By the end of Monday night's 37-18 loss to the Cowboys, Dallas fans were in the majority and more vocal.

The Giants have become New York's other NFL embarrassment, joining the Jets (1-7) in creating misery for their fans.

What's troubling is that this was the season co-owner John Mara wanted to leave MetLife Stadium after the final game feeling optimistic about the future of the franchise and his young team. There have been flashes of progress, but they have been overshadowed by turnovers, blown coverages and mental errors, all nasty things that lead to losing.

Shurmur is on the hot seat. He has a 7-18 record in just over 1½ seasons. His only two wins this season are against Washington (1-8) and Tampa Bay (2-6), and the Bucs had to miss a last-second field goal attempt from PAT range to lose.

That's not good for job security, and the situation shows no sign of changing.

If there is a positive, it is that Shurmur has not lost the locker room. The players are standing behind him.

If that changes, the Giants will be looking for a new coach.

Since winning the Super Bowl in February 2012, the Giants have had two winnings seasons. They went 9-7 the following season and missed the playoffs. They were 11-5 in 2016, the only season they have gotten back to the postseason. Their record in that span is 49-72.

The chances of making the playoffs this season are dismal. A win over the Jets on Sunday is a must.

Lose that and Shurmur might be losing a lot more.

Bits and pieces. It's the same story every week. It's a young team. They play hard. Just too many mistakes to win consistently.

Shurmur's offense and his play calling. The Giants have gotten bogged down after Jones posted victories in his first two starts after replacing Manning.

New York gained 271 yards against Dallas, the fourth time in five games it finished with fewer than 300 yards. Saquon Barkley was limited to 14 carries for 28 yards, tying his career low in a full game.

The offensive scored one touchdown in five trips to the red zone. Shurmur bares the blame for Jones' interception on a deep pass at the end of the first half that led to Dallas' go-ahead field goal, electing to throw deep on third-and-10.

Shurmur has insisted on calling the plays. Maybe it's time offensive coordinator Mike Shula took over.

Jones. It's tough to knock a rookie quarterback when there are so many things not working on offense, particularly the running game. However, the No. 6 overall pick has got to do a better protecting the football. He had three more turnovers against Dallas, giving him 16 for the season.

Nothing major. Engram is dealing with a foot issue. The concern remains receiver Sterling Shepard, who missed his fourth consecutive game. He was cleared on Friday but developed more symptoms over the weekend, forcing him back into the concussion protocol.

27 and 400 — The Giants have allowed at least 27 points in an NFL-high eight of nine games this season, and at least 31 points in five. Dallas' 37 points were the most allowed by the Giants since the Rams scored 51 on Nov. 5, 2017. Five opponents have gained at least 400 yards on offense this season.

Have to beat the Jets next weekend to avoid heading into a bye on a six-game losing streak. No more mistakes. Management wanted the team to be more competitive this year. The record and margins of loss don't support that desire.