Linsley making big impact for Chargers on and off field 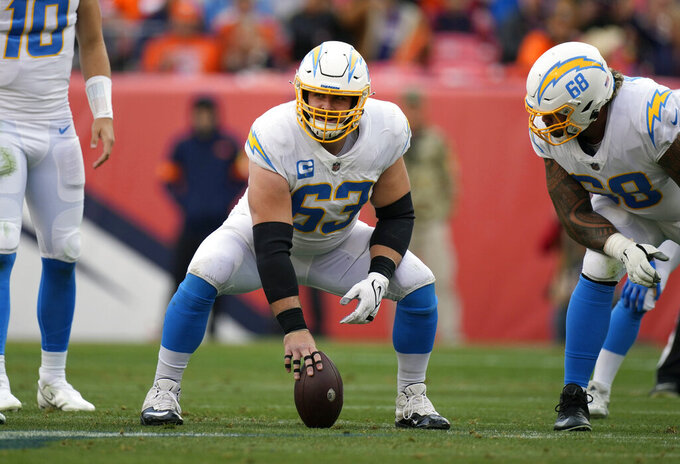 FILE - Los Angeles Chargers center Corey Linsley (63) against the Denver Broncos during the first half of an NFL football game, Sunday, Nov. 28, 2021, in Denver. Corey Linsley has made an impact on and off the field in his first season with the Los Angeles Chargers. Linsley, who signed with the Bolts in the offseason after seven seasons in Green Bay, has provided stability to the offensive line and is the team's nominee for the Walter Payton NFL Man of the Year award. (AP Photo/David Zalubowski, File)

COSTA MESA, Calif. (AP) — Even though Corey Linsley has had a hectic first season with the Los Angeles Chargers, it hasn't affected his ability to make an impact on and off the field.

Linsley became the NFL's highest-paid center in March when he signed a five-year, $62.5 million contract with the Chargers after seven seasons with Green Bay. He has been the leader of a rebuilt offensive line and is one of the bigger reasons why Los Angeles (7-5) is contending for its first playoff spot since 2018.

“It has been a whirlwind, for sure. It hasn’t been a smooth ride, but I wouldn’t trade for the world. It’s been quite the experience and we’re happy to be here,” Linsley said.

The Chargers had one of the league's worst offensive lines last season. They went into this season with four new starters on the line, but right tackle Bryan Bulaga, the lone returnee from last year, has not played since the second half of the Sept. 12 opener at Washington, and right guard Oday Aboushi suffered a season-ending knee injury four weeks later against Cleveland.

Still, this year's line has made life easier for quarterback Justin Herbert. After being pressured on 28.4% of his dropbacks and getting hit 100 times last season, which was sixth most in the league, Herbert's pressure rate is down to 24.3%.

With Linsley anchoring the line, the Chargers are allowing 8.2 pressures per game, which is fourth best in the AFC. Los Angeles' offense is seventh in the league in net yards per game at 382.1.

“The consistency and performance for this guy is the highest that you could ever hope for at that position," coach Brandon Staley said. "When you pay guys the way that we paid him, you want those guys to really be the example of why you are paying them that much. In the NFL, that’s a big reality. He represents a guy that is worth it in more ways than one."

Linsley's leadership also shows in the huddle, albeit in an unorthodox manner. He is the only center who has his back to the huddle while Herbert is calling plays. Linsley said he started doing it in Green Bay because there were times when he broke the huddle and the defense had already changed personnel.

Linsley thinks keeping an eye on the defense during the huddle gives the line a little edge.

“I’d like to think that it pays off every week. Especially in our protection plan, we might be blocking a certain way that’s different," Linsley said. "In the run fit, we might have a new tight end or new fullback in the game that needs to know what to be alert for with the certain defensive personnel."

As much as Linsley has helped improve the Charges' offense, he has also made a huge impact in the community. Linsley and his wife Anna have long supported Court Appointed Special Advocates (CASA). The volunteer, nonprofit organization provides abused and neglected children under legal protection of the court system a representative to act on their behalf.

Both have served as CASA advocates, first in Brown County, Wisconsin, and now in Los Angeles and Orange counties in California. Linsley is the Chargers' nominee for the Walter Payton NFL Man of the Year Award after he was Green Bay's nominee last season.

“The biggest thing is the publicity that goes to CASA and the awareness. Maybe people that haven’t heard of CASA before or maybe don’t know about it are now interested — whether it’s because they want to become advocates or they want to donate and make a financial impact,” Linsley said. “That’s the most important thing about it.

"My wife and I have been involved with CASA for a number of years now and my wife does a great job with it. She does more than I do with connecting with everybody. She does an awesome job. I’m happy I can be the guy that can get them publicity.”

NOTES: WR Mike Williams and CB Chris Harris were placed on the reserve/COVID-19 list on Wednesday. Both were close contacts of WR Keenan Allen, who tested positive on Monday. All three players have the possibility of playing on Sunday against the New York Giants if Allen has two negative tests in a 24-hour period while Williams and Harris have five straight days of negative tests. The five-day quarantine period for Williams and Harris started Monday. ... DT Linval Joseph is out of COVID-19 protocols after missing the last three games. ... CB Asante Samuel Jr. remains in concussion protocol but participated in individual drills.